'Good Wives' by Louisa May Alcott 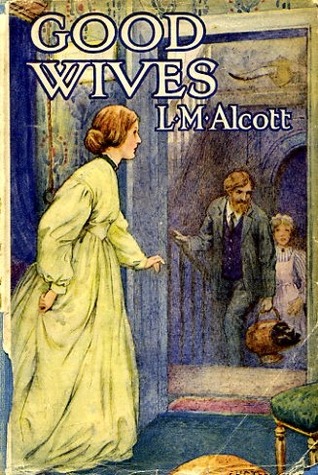 NOTE: Little Women is sometimes published in two volumes, entitled Little Women and Good Wives.Amy looked relieved, but naughty Jo took her at her word, for during the first call she sat with every limb gracefully composed, every fold correctly draped, calm as a summer sea, cool as a snowbank, and as silent as the sphinx. In vain Mrs. Chester alluded to her 'charming novel', and the Misses Chester introduced parties, picnics, the opera, and the fashions. Each and all were answered by a smile, a bow, and a demure "Yes" or "No" with the chill on.

Okay, now for Good Wives. To start with, I could hardly figure out whether I should write a review or a blog post about author intrusion. Alcott lapses so easily into her own personal musings about her characters' strengths and weaknesses, sometimes taking up pages of text. These days, publishers and editors warn authors to cut out their subjective opinions and let readers make up their own minds. Lucky for Louisa she lived in the nineteenth century then. If she wasn't allowed to tell us how to direct our thoughts, the book would be a whole lot thinner. I honestly wonder whether she would have managed, because adding her own reflective little homilies seemed to be as natural as breathing to her. How times, and literary standards, change.

In this story, the four sisters grow up and branch out of the house, living their separate lives. Meg gets married, Amy is lucky enough to travel the continent, Jo goes to work in New York, and poor Beth faces her journey to the next world. She never recovered sufficiently from her bout of scarlet fever to regain her strength.

This is the story where those who had high hopes for a romance between Jo and Laurie get them dashed to pieces. The signs are there early on, when Mrs March says she doesn't think they are suited to each other. If any other character had said it, we might have still held hope, but we know by now that 'Marmee' is always right.  Sure enough, Jo turns out to have no romantic feelings for him, even though she compares other young men to Laurie to their detriment. Go figure. 'I couldn't fall in love with the dear old fellow merely out of gratitude, could I?' I can hear echoes of young girls throughout the centuries saying, 'Yes!'

(I won't deny that he comes across as a bit of a spoilt brat at times though. Don't you love the cure his grandfather attempts for Laurie's lovesickness? A trip to Europe. You'd think that just might work, if anything would. But like other children of wealth and privilege we come across in stories, Laurie just seems to take it in his stride with a, 'Humph, I doubt anything will help, but if you insist, I'll go to humour you,' type of attitude.)

I think the Jo/Prof Bhaer pairing does work, although he's quite a bit older and comes across as a second father at times. He's such an absent-minded, kid-loving, academic sweetheart, it's hard to hate him for not being Laurie. And it can be argued that everything works out for good. Jo is devastated at not being offered the European trip instead of Amy, but if she had, she wouldn't have met the love of her life. And he shows her that 'character is a better possession than money, rank, intellect or beauty.' You can't argue with that.

I'm not convinced the Amy/Laurie pairing works as well. I like it in concept, but find it hard to swallow that they're as well suited as Jo thinks. Does Amy ever get to renounce her mercenary spirit, since she ends up marrying a rich boy anyway? And be honest, do you remember Laurie as the guy who marries a beautiful, artistic woman, or the guy who suffered from unrequited love? Even when he and Jo catch up with each other toward the end of the book, there are still flirty vibes flowing between them.

I've heard people pick Meg's part of this story to pieces, because she settled for being a 'frumpy housewife' and all those other things feminists say. But apart from the incident where she burns her jam, she's happy in that role, so I'd say why not live and let live? One of my favourite lines in the book happens on the heels of that disaster. 'John Brooke laughed then as he never dared laugh afterwards.' Marriage was a learning curve for both of them.

Some bits about the value of writing and stories stand out. Jo prefers her imaginary heroes to real men, because 'you can shut them in the kitchen tin till called for, while the latter are less manageable.' I wonder if that was Louisa's own opinion about males.

Finally, when Professor Bhaer gives Jo a book of Shakespeare's works, he says something rather great. 'You say often you wish a library. Here I gif you one, for between these lids (covers) is many books in one. Read him well and he will help you much, for the study of character in this book will help you to read it in the world and paint it with your pen.' That's the same reason why we read many good books. I guess my final opinion of the book echoes Professor Bhaer. 'Das ist gute.'
Next on the list is my review of Little Men