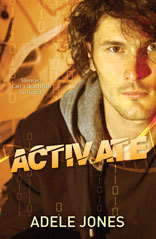 Josh Hammond is not who he says he is ...To stay alive, he must guard his identity, existing isolated from his former life and those he loves. The one enemy he can't outrun is his failing health, and time is short. Desperate for a solution, Josh leaves the protection of his safe house unapproved. Instead of a cure, he's left powerless against a cunning adversary. Determined to reclaim his life, he grasps an opportunity for escape, but things go drastically wrong. Can he find a way to expose the lies of a criminal mastermind, or will he be silenced? Forever.

MY THOUGHTS:
This is the third and final novel in a trilogy. (I might leak a few plot spoilers from the earlier books, assuming that if you're reading this review, you've probably read them too. I'll try to keep them minimal.) To recap, Blaine Colton is the young man who was given a new lease of life when a miraculous new cure for his mitochondrial disease worked well on him. He's now in witness protection under the alias Josh Hammond, as nasty characters from a crime syndicate who think he knows too much want him dead. He's discovered that his trusted pills, Ramer's Cure, have been a two-edged sword, keeping him alive but doing irreparable damage to his DNA. And now Professor Ramer himself has been arrested, suspected of being part of the crime syndicate.

It's good to see familiar faces from the first two books. Blaine has no choice but to put his life in the hands of Dr Eddie Jonick, who's been regarded with suspicion after his involvement with the crooked Dr Melissa Hartfield. You might remember Eddie as the 'complete package' guy, with intelligence, athleticism and good looks. I'm pleased that from the start of this novel, he proves to be a good friend to Blaine. And the romantic tension between him and Dr Kate Archer is fun to read.

Blaine's biological mother Jennifer, who betrayed Blaine in the last novel also reappears. This story continues to stir up any maternal feelings she might have deeply buried. Will she continue going along with bad plans for the sake of her financial security and personal safety? Most importantly, the story gets us wondering how far you can push a mother. And of course, there's Blaine's sweet, long-suffering girlfriend Sophie, who has been through so much in a short time for such a young woman.

The bad guy (I won't mention his name, in case it lessens the impact) is a particularly dangerous villain because he's so intelligent. Wow, how many last ditch efforts to sabotage everything can he possibly cook up? It's so often practically beneath the good guys' noses, and particularly nasty and spiteful. I wanted to read quickly to find out how long it would take the heroes to latch on to all his shenanigans.

Finally, you've got to love Blaine himself. For a good chunk of the book, he's in a more helpless position than we've seen him in the prequels, but it makes him come across stronger and more admirable than ever before. This boy takes the chance to be pro-active whenever he can, and I'm sure it's this attitude that gives him his fighting edge, increasing his odds for survival and surprising everyone. He has the challenge of trying to impart vital information when it seems there's no way he possibly can. And he grapples with the even deeper question of the value of a person who can seemingly do nothing but merely exist.

Now that all three stories in this series are available, I'd recommend new readers to read them straight through, back to back, if possible. What a ride that would be. Enough to make your head spin, as Blaine's so often does.

Check out my reviews of the first two books in this series, Integrate and Replicate. And for an interview I once had with the hero Blaine Colton himself, click here.