Fictional Bridges - Cross them if you can! 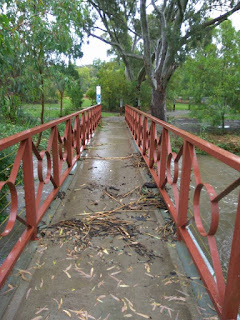 For obvious reasons, bridges are symbols of crossing over from one state of being to another. If you're crossing of your own volition, the destination is presumably more desirable. And often you'll find literary bridges are a person's last hope. Perhaps that's why impediments are such an incredibly common feature in stories. They represent the obstacles we all may face when we make a decision to change our way of life. How often do we find that when one character tries to cross a bridge, an opposing character or force attempts to stop him?

1) Robin Hood
The legendary outlaw of Sherwood Forest and a strapping man named John Little were both attempting to cross a narrow bridge from opposite directions, and refused to back down and give ground to the other. Fighting a duel was the best solution they could think of. The big guy vanquished Robin and sent him for an unintentional swim. He was given the ironic name reversal 'Little John' and became one of the staunchest members of the band. Those were obviously the days when men were taught to value brute force over simple good manners. Neither of them dreamed of saying, 'You can pass first.'

2) The Billy Goats Gruff
A nasty troll chose to set up house beneath a rickety bridge, just so he could stop harmless passers-by, because trolls love making life harder for others. The only way for the hungry goats to reach a greener pasture was over that bridge, but they were challenged by the troll who wanted them for his lunch.  His scare tactics were enough to traumatise the two smaller goats, but their big buddy was brave enough to charge at the troll and teach him a lesson.

3) Monty Python's Search for the Holy Grail
Remember the formidable looking keeper of the bridge? 'Who must cross the bridge of death must answer me these questions three, ere the other side he sees.' If you get one of his daunting questions wrong, you're cast into the Gorge of Eternal Peril. Brave Lancelot gets an easy run, giving his companions false confidence. Robin and Galahad come to grief, then King Arthur has one of those serendipitous strokes of luck, enabling them to deal very nicely with that annoying bridge keeper.

4) Miss Peregrine's Peculiar Children
In Library of Souls, the third book of the trilogy, Jacob, Emma and Addison the dog are anxious to cross the bridge which leads to the wights' tower headquarters, where their friends are imprisoned. At first it seems too easy. The only opposition comes from a group of dismembered heads on pikes, who suddenly realise that they're in no position to do anything but call down menacing threats. Alas, the wights have their fortress too carefully guarded to just walk up to after all. That bridge contains hidden perils which send the heroes back the way they came, to the amusement of the drug addicts who are always loitering around the foot of it.

5) Lord of the Rings
'You cannot pass!' Remember the treacherous Bridge of Khazad-dum, with no rails which could only be crossed in single file? While the Fellowship were being pursued by Orcs and a Balrog of Morgoth, Gandalf stood in the middle of the bridge forbidding the Balrog to pass, and buying the others time. The intensity of their fight broke the bridge and sent them both plummeting in a dramatic scene.

6) The Legend of Sleepy Hollow
In this macabre American folk tale, the bridge is said to mark the spot where the headless spectre must always disappear. The terrified hero, Ichabod Crane, makes it across on his reluctant horse, but the pursuing ghost has one more ace up his sleeve. He picks up his head, which he carries on top of his saddle, and hurls it at Ichabod, knocking him off his horse. The poor young school teacher is never seen again. It's one of those stories where the protagonist comes to a sad end. 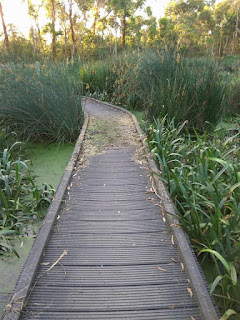 The superstitions involved with bridge building throughout the years show the respect people have for their possible dangerous nature. In some places, it was believed that the devil would carry off the first soul to cross the bridge, so an animal was always herded over first. And sometimes, brass coins and keys were cemented into the mortar, as a sign of good luck for travellers. In some cities, real-life heroes have set up their homes near bridges, so they can minister to poor, desperate souls who are sitting on the edge, contemplating suicide.

7) Little House on the Prairie
In By the Banks of Plum Creek, Laura Ingalls Wilder tells the story of when she almost drowned as a little girl. She was standing on a small footbridge after a raging storm, and simply wanted to dip her feet into the swirling froth. The strong current sucked her right in, and she had to cling to the bridge for dear life, finally managing to heave herself back up.

8) Emily of New Moon
Perhaps the danger was only to your reputation. In the second book of the series, the heroine and her best friend Ilse Burnley were having an evening walk and met their two friends, Teddy Kent and Perry Miller, also out for a stroll. They happened to be right by a bridge, so crossed over together before going their separate ways. But next day, the rumour was spreading all through town that Emily and Ilse had been hanging out shamelessly with two boys all night.

9) The Middle
In my favourite sitcom, the parents, Frankie and Mike Heck, are trying some tough love on their youngest son, Brick. He is terrified whenever they cross a bridge in the car, because he's read all about collapsing bridge incidents. It's got to the point where every drive is annoying, and they are determined to prove he has nothing to fear. However, he holds his ground, and it doesn't end as smoothly as they hoped.

10) The Willow Platter story
Many people have this china design on their plates and bowls. You can see the bridge in the picture, with the soldiers in pursuit of the star-crossed lovers. In this Chinese legend, Koong-se was a beautiful girl who was meant to marry a powerful Duke, but she was in love with her father's humble accountant, Chang. The lovers assumed a disguise and managed to escape over a bridge to safety, and lived happily together for many years before discovery. The were eventually executed, and assumed the form of a pair of cooing doves. 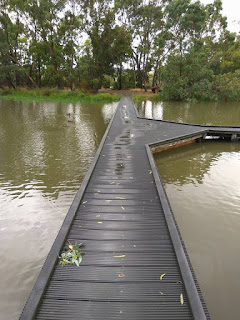 But there's always an exception to any rule. The next bridge story has a completely different vibe. No menacing sense of danger, no threats of death or submersion. Just a peaceful day of relaxing and improvising your own fun as you go. It comes from a well-known, cuddly hero who's an expert at taking life easy and not following the crowd.

11) Winnie the Pooh
Pooh Bear was crossing a small bridge with his best mate, Piglet, and decided to make up his own game. 'What if we both throw a twig over this side, then hurry to the other to see whose will float through first?' It turned out to be such fun the others got suckered in to playing too - including the readers. Be honest, who hasn't ever played Pooh Sticks?

12) The Ultimate Bridge Analogy
This one has brought countless thousands of people hope and comfort over many centuries. It's found within the pages of Scripture, where we're told that Jesus is the only bridge between a holy God and his earthy human creations. This is possibly the ultimate reason why so many architects, engineers and designers throughout history have felt a passion to make their creations things of grace, beauty and grandeur. 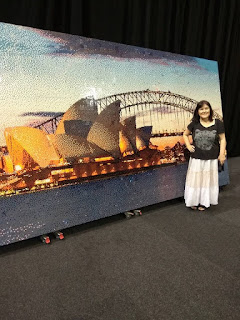 I thought this might be a good list for the beginning of a new year, to help us identify the metaphorical bridges in our own lives, and encourage us to keep plowing through any hindrances, if we think reaching the other side is truly worth it. I hope you enjoyed crossing all these story bridges. In fact, I like to think that bloggers and reviewers like me are like bridges between books and readers.
(BTW, this is an enormous mosaic of Sydney Opera House and Harbour Bridge built of Lego tiles. Next best thing to crossing it for real, which we got to do back in 2004.)