Mark, Charlotte and Us 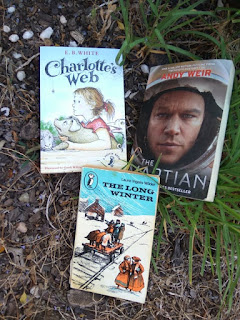 KOVID-19 has entered the world silently and knocked it off kilter within a short length of time. The physical manifestations aren't the focus of this discussion. We in South Australia are possibly among the least statistically affected. I think there have been 20 cases to date as I type, and we are hoping and praying that stricter quarantine of international travelers and more vigilant social isolation will knock this sucker out sooner rather than later.

But I want to talk about the financial repercussions of this beast. My husband is an entertainer who visits nursing homes for his livelihood, so our household has been hit hard. His flourishing business was decimated literally overnight, as every nursing home has cancelled visitors for the foreseeable future. Avoiding a possible over-run on our hospital system must take priority of course, but my word it takes its financial toll on families like ours, who are left overnight in the frightening position of a mortgage and no income. We have to focus solely on practical ways of staying afloat and my head has been spinning like a top and getting nowhere.

This blog is partly about drawing on literary heroes for inspiration, so I settled on an unlikely pair for one thing they share in common. That's their confidence that all will end well, in spite of the dire way things may look. This astronaut and spider are good role models for such hard times. Then I added the true example of a family from the 19th century.

I'll give a quick summary of what they faced themselves.

Nobody would ever choose to be in Mark's shoes. He was assumed dead and abandoned on Mars. Learning to wing it and improvise was necessary to keep himself alive on a barren red planet with no oxygen, food or water. He figured out many creative hacks including the use of his own manure to fertilise potatoes. Several times things looked very dicey. Mark's typical response was, 'This seems very bad, and I know I'll work something out or else I'll die, but I'm not sure what it'll be yet.' And he did pull through, with the help of a mighty roll of duct tape that never seemed to end. (My review is here.)

For Charlotte, it was her best friend's life at stake. Poor Wilbur the young pig discovered that he was destined for the chopping block to be made into ham and bacon. Charlotte promised to save his life, but to Wilbur's agitation, admitted she had no idea how. But Charlotte was a wise spider who knew that necessity is a powerful trigger for creative inspiration. She was so certain she'd figure it out that she refused to lose her composure at all, and even told Wilbur that his histrionics were most unbecoming and annoying. Sure enough, cool and calm won the day, and she figured out an ingenious way to save Wilbur by weaving complimentary phrases about him in her web. (My review is here.)

For more inspiration is the Ingalls family from De Smet. During a scary winter in which a freakishly heavy barrage of back-to-back blizzards prevented the supply train all season, the townsfolk wondered whether they'd freeze or starve first. The only option was to sit at home and try to wait it out, without even the modern luxury of electricity. Pa and Ma got clever, improvising their own alternative sources of heat and light. He twisted hay into hard sticks to replace the scarce coal, and she made button lamps from scraps she had on hand. Perhaps they'd never have thought of these measures if the need had not been so dire. (My review is here.)

I guess we must all call on our inner Mark, Charlotte or Charles and Caroline Ingalls in the days ahead. There is no way of estimating when this is all going to end, which makes it all the more heartbreaking and frustrating for anxious control freaks like me. I just want my husband to be employed again, our elderly citizens to be safe and sound, and the assurance that anyone who needs a hospital bed for whatever reason may be assured of quality care. Oh yeah, and just a little bit of cash flow for groceries and overheads would be nice! But it's looking very much as if faith and creativity will be vital while we're waiting. In the spirit of these two heroes, my motto must be, 'I know we'll get through this, because we have to eat, although I'm not sure how it'll look.'

Are any of you in a similar position to us? Perhaps we could pool creative ideas of staying afloat, if we're all sharing social distancing at home while supplies run short and income dries up. I can't suggest much myself, because I've got nothing yet. But at least we have cool, calm legends to inspire us in anxious times. Hopefully their example will prove to be even more contagious than COVID-19.
Posted by Paula Vince at 5:00 AM