'City of Girls' by Elizabeth Gilbert 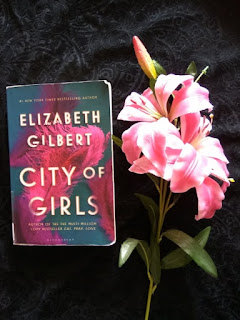 Beloved author Elizabeth Gilbert returns to fiction with a unique love story set in the New York City theater world during the 1940s. Told from the perspective of an older woman as she looks back on her youth with both pleasure and regret (but mostly pleasure), City of Girls explores themes of female sexuality and promiscuity, as well as the idiosyncrasies of true love.

MY THOUGHTS:
I have great respect and admiration for Elizabeth Gilbert's work, especially after reading Big Magic, which is one of my favourite books about forming our creative mindsets to withstand hard knocks. I wasn't as big a fan of Eat, Pray, Love, but did find it interesting and easy to read. I'm sure Gilbert has established herself as one of the significant voices of the 21st century, so when I saw City of Girls at the bookshop I was interested right away but decided to hold off until I could borrow it from the library. Sure enough, it appeared recently for a one week loan, and turns out I was even more riveted than I expected to be from the blurb.

It's the overview of an elderly lady's life, focusing for the first section on the era just prior to and during the second world war, when she was a young woman. Nineteen-year-old Vivian Morris' high achieving parents are embarrassed when she flunks her first year at college, and send her to live for a while with her Aunt Peg, who runs a small theatre company in NYC. Vivian's knack for sewing amazing costumes makes her a favourite of all the actors and showgirls, and she also falls for the city nightlife in a big way.

This turns out to be a stunning epic about a girl who hits rock bottom and can barely hold her head up for shame, let alone figure out how to move beyond it. It's not the sort of false, misplaced shame we all get from taking critical comments and media comparisons on board. It's the huge, overwhelming shame of knowing that you've made a really bad stuff-up, bared for all to see and impossible to excuse. Vivian is a sitting duck for anyone who might cast aspersions at her, because she knows she has absolutely no comeback. We readers know long beforehand that something big is coming, and keep turning pages thinking, 'Oh oh, what does she do?'

After it's over, she's totally demoralised by a person she deeply admires, then wounded by the scathing words of a total stranger. Then in the wake of her big mistake, Vivian discovers one of life's big paradoxes. Sometimes people we pour lots of effort into nurturing relationships with just fall away, even though we may assume they will always have significant roles in our lives. And those who start off as sideliners have the potential to become very meaningful.

I really enjoy Gilbert's prose. Vivian becomes an artist with words as she tells her own story, yet she's still totally believable as the girl who says, 'How many books does a person need to read in order to prove she can read a book?' I guess it takes skillful talent on Gilbert's part to make Vivian both literary genius and rebel dunce rolled in one, but she pulls it off. And gives Vivian a great sense of humour to boot.

The opening hook grabbed me, as it's intended to. It's all meant to be one long letter. Vivian is writing her story for the benefit of a woman named Angela, who has written to finally ask what she meant to her father, since both parents are now dead. Vivian replies that she can't presume to tell Angela what she meant to her father, Frank, but she can certainly tell her what Frank meant to her! And that's what the whole story leads up to. At first it seems that Frank takes a looooong time to appear in Vivian's life, but we eventually understand why his appearance is tied up with all that went before.

Anyone who hates reading sex scenes, and stories about casual sex in general might be totally grossed out by this book! In all honesty, there is probably way too much information at times for all of us. It's not essential to the story, and certainly not the sort of stuff I can imagine Vivian would want to tell Angela! But as for the whole package, it's all about dignity, self-acceptance, looking through people's facades at the common humanity beneath the surface, and life's curveballs looking way different to how we might expect. Oh, and of course the assurance that no matter what we've done, it's possible to not only live it down but become good people in the process. What more can we ask for in a book?

Now I might look out for Elizabeth Gilbert's earlier novel, The Signature of all Things.