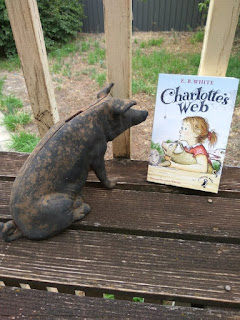 Some Pig. Humble. Radiant. These are the words in Charlotte's Web, high up in Zuckerman's barn. Charlotte's spiderweb tells of her feelings for a little pig named Wilbur, who simply wants a friend. They also express the love of a girl named Fern, who saved Wilbur's life when he was born the runt of his litter.

E. B. White's Newbery Honor Book is a tender novel of friendship, love, life, and death that will continue to be enjoyed by generations to come. This edition contains newly color illustrations by Garth Williams, the acclaimed illustrator of E. B. White's Stuart Little and Laura Ingalls Wilder's Little House series, among many other books.

MY THOUGHTS:
This will go into my 2020 Back to the Classics Challenge for the category with a person's name in the title. The last time I read it was as a 9-year-old behind my classroom desk during silent reading. It all comes rushing back. Wilbur, a tiny piglet who was runt of the litter, is saved from the chopping block by a little girl named Fern. Alas, his luck soon runs out. Fern's father eventually sells Wilbur to his brother-in-law, Homer Zuckerman, who intends to make him into pork sausages and bacon. But Wilbur makes an unlikely alliance with a great brain who intends to save his life. She's a spider named Charlotte.

As is often the case, I enjoyed the story far more this time round. The charisma of the title character won my greatest respect and admiration. Charlotte is an absolute legend who liberates us from negative, menacing impressions that abound about spiders. Who else do we even have in literature to compare her with? There's Aragog and his hungry, ruthless offspring. Or the crafty, 8-legged she-demon Shelob. Even Miss Muffet's inquisitive spider scared little girls silly. I'll rattle off several reasons why I love Charlotte, not only for giving spiders a more positive profile but for encouraging us to be the best versions of ourselves we can.

1) She accepts and defends her essential nature. 'I'm not entirely happy about my diet of flies and bugs, but it's the way I'm made.' At first Wilbur has misgivings about making such a brutal, scheming and bloodthirsty friend, yet he comes to understand that she's actually humane and great for the environment.
2) She encourages us to adopt an orderly, slow pace. 'I'm glad I'm a sedentary spider.' While she lies in wait for what might come, she uses her web as a good place to sit and think, at which she excels. Even with no idea how she'll save her friend Wilbur, she's confident that something will occur to her in good time. I love her motto, 'Never hurry. Never worry.'
3) She motivates friends to become their best selves. Even though Wilbur considers himself an average little porker, he aims to take Charlotte's words about himself, such as radiant, on board. And before long, his spotless white glow begins to shine for all to see. All because of his best friend's words.
4) She's content to stay in the background, satisfied that she's done her best and made a difference to her sphere of influence. If nobody even notices, it doesn't matter one bit. When she knows she's languishing toward the end of her short life, she still spends those moments in peaceful contentment, because she's saved Wilbur's neck.
5) She has a super-descriptive vocabulary, enabling her to make applications with breadth, depth and wisdom. And once again, it's okay if she doesn't get the credit. Using her creativity and skill with words is the main thing, after all. Not being recognised for it.
6) Altogether, she's a real lady. Charlotte is elegant and smart. Quiet industry is second nature to her, and she doesn't get hung up about what others may think of her. For the short time she lives with the gang in the barn, she adds class and contemplation. A perfect role model.

The supporting characters are excellent too. Who could possibly not love Wilbur, and his stout, merry approach to life, reminiscent of Winnie the Pooh? I also sort of dig the sneaky opportunist Templeton the rat, who has no 'milk of rodent kindness' but can be coerced into good deeds if he's convinced they're in his own best interest. He's a super hoarder who proves that even the stinkiest junk may come in handy at times.

All up, this re-visited book from my earliest childhood was more of a page-turner than several other longer and more 'grown-up ones I've read recently. And Garth Williams' awesome illustrations brings the story to life. It's a good weapon in our quest not become like the conventional Mrs Arable, who's alarmed by the merest hint of her daughter's imagination.