Masters of choosing a great attitude 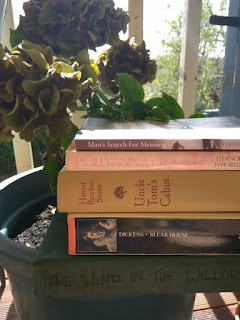 Here's a list for where we find ourselves in 2020, which will always be remembered as the year of Coronavirus. We are still just a couple of weeks into the global social distancing measures intended to flatten the curve of new cases. Reluctant hermits everywhere are feeling a gamut of impotent emotions bouncing between fear, impatience, boredom, and frustration. I've noticed some positive remarks from exhausted souls embracing the peace and quiet, but that might peter out if this drags on for long. On the whole, we just want the threat of a catastrophic pandemic behind us and our old lives back.

Our only recourse is to wait this out, so it would seem the one thing we can control is our attitude. So I've drawn on the collective wisdom of philosophers, characters from epic historical classics and kids' tales alike. Since these diverse people all figured out the same secret under very adverse circumstances, I'm taking it as a clear sign that it's universal enough for us to latch onto too. Let's make the choice to follow in their footsteps, and here they are.

Smith Wigglesworth
This stern and scary plumber turned evangelist from the early 20th century was known partly for his unconventional healing methods, in which he'd forcefully strike the ailing body parts of patients seeking prayer. However, he did see stunning results, and a delve into his personal life reveals that he lived with an iron control over both his faith and his emotions. One quote of his I appreciate is along the lines of, 'When I wake up, I don't ask Smith how he's feeling. I tell him how he's feeling!' Perhaps our friend Smith was onto something there.

Voltaire
He was a famous French Enlightenment philosopher who helped shape western thought as we know it. Voltaire was known for his outspoken championing of pure reason, and his criticism of church and state alike. Poles apart from Wigglesworth in most of his thinking, they did converge on that one simple, possibly crucial matter of attitude. Voltaire said, 'The most important decision you will ever make is to be in a good mood.' Hmm, that's from a famous thinker, folks.

Pierre Bezukhov
Our chubby young millionaire from War and Peace was battered from pillar to post in his emotions throughout most of the huge novel, as he tried desperately to wrap his head around the meaning of life. His huge bank balance and outspoken advisers left him reeling and puzzled. Only when he was captured by the French as a prisoner of war, herded with a group of other Russians toward the border and stripped of all but the rags on his back did the answer dawn on him forcefully. True freedom and meaning consists of being free to make the choice to stay serene, peaceful and optimistic no matter what the world deals out to us. It takes losing everything for Pierre to gain that epiphany through experience, and by then we readers have journeyed with him for so long that it's a powerful eye-opener for us too. (My review is here.)

Pollyanna
This happy little heroine of kid's lit had the secret all along, and clung to it even when people tried to shoot her theory down. It's the Glad Game her father taught her as a tiny tot, when she received a pair of crutches in a relief box instead of the doll she'd hoped for. He told her in effect to use her imagination to create lemonade from the lemons life throws at us. In her case, Pollyanna could be glad that she didn't need the crutches. That moment started a revolution that lasted through a whole book series, as Pollyanna grew up sharing her Glad Game with whoever she encountered. And in our digital era, we needn't look far to find a host of online Pollyannas dispensing positive advice to help us through our global crisis. (Here is my review)

Uncle Tom
He's the sturdy, noble slave from the novel that helped shape American history. Every day in which Tom served his earthly masters was done from an attitude of setting his heart on things above, which he trusted contained immeasurable glory and joy beyond his wild imaginings. He knew that transitory circumstances always change, which kept him patient no matter what. The only time Uncle Tom opened his mouth in opposition to Simon Legree, the cruelest master of all, was not so much a mouthful of backchat as a triumphant faith statement and attitude shaper. Tom told Legree that no matter what he inflicted on his body, he had no influence whatsoever over his attitude and soul. Tom's allegiance to God and looking to help from heaven would continue no matter how hard Legree tried to stamp it out (and that rotter tried his very best!) Tom's decision to remain trustful and optimistic was the defining crux of his life. Hurray! (My review is here.)

Esther Summerson
Charles Dickens' only ever female narrator is hard to forget, because life has taught her the benefit of choosing cheerfulness every single time. This girl practices what she preaches. Her loved ones are horrified when her beautiful porcelain complexion is ruined forever by the smallpox scars left over from a long illness. After one moment of grief, Esther draws on her habit of looking for something to rejoice over, instead of dwelling on her very hard luck. Maybe she couldn't have done it if it hadn't become second nature over time. But here's what she said and meant with all her heart. 'I found every breath of fresh air, every scent, every flower and leaf and blade of grass, every passing cloud and everything in nature more beautiful and wonderful to me than I had ever found it yet. This was my first gain from my illness. How little I had lost, when the wide world was so full of delight to me.' (Check out my review of Bleak House.)

Toad of Toad Hall
Okay, this egomaniac isn't the best role model in general, but he does learn some valuable wisdom while serving a jail sentence for car theft and reckless driving. The jailer's generous daughter brings him a delicious plate of bubble and squeak on toast to help cheer him up, and to the great surprise of both, it works. The succulent dish, appealing to all five senses, is the catalyst Toad needs to snap into a happier frame of mind. He discovers that thinking pleasant thoughts is a real mood-booster. Toad's new and inspiring thoughts include, 'Chivalry, poetry, broad meadows, and cattle browsing in them raked by sun and wind: kitchen gardens and straight herb borders; warm snapdragons beset by bees; the comforting clink of glasses set down on the table; breakfasts on bright, frosty mornings; cosy parlour firesides on wintry evenings; the purring of contented cats and twitter of sleepy canaries.' That's the spirit, Toady! When optimism fires his imagination, he begins to consider creative ways out of his fix which never occurred to him for as long as he was sobbing with hopelessness and depression. (Review of Wind in the Willows is on the way.)

Viktor Frankl
Perhaps this humble and famous Austrian doctor and Holocaust survivor says it best of all, which is why I've saved him for last. What Frankl figured out (which is basically a very eloquent wrap-up of everyone else I've cited) saved his life in Auschwitz. He devoted his remaining years to sharing his personal testimony and attitude methodology with others. The first draft of his classic, 'Man's Search for Meaning' was written in nine days flat when he was first released. Since it's based on the most horrific personal experience, it's no wonder this 1946 bestseller keeps making a powerful impact on readers. Frankl's basic tenet is that although we can't always avoid suffering, we can always choose our attitudes in dealing with it and moving forward. 'Everything can be taken from a man but one thing,' he writes. 'The last of the human freedoms, to choose one's attitude in any given set of circumstances. To choose one's own way.' (Review coming down the track.)

This is only scratching the surface of book characters and authors who echo the same sentiment. I kept thinking of more, but limited it to these eight for the sake of keeping this list succinct and diverse. If you admire any of my choices, or would like to add examples of your own in the comments, please do. Most of us have more time than usual on our hands for discussion, so what better subject than good attitude examples? You could even do worse than cherry pick any book from this list to read during these times.