Is Harry Potter a Bad Dad? 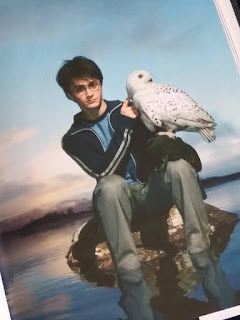 This post has plot spoilers for Harry Potter and the Cursed Child. It's intended to be a discussion post rather than a review.

We all know what poor little Harry Potter saw when he gazed into the Mirror of Erised, which reveals a person's greatest desire. It was the smiling faces of his family, who he lost as a baby. The lack of his loving parents was always his greatest heartache. Their death was what he hated Lord Voldemort for most. The thing he most envied was his friend Ron's stable family life. When Harry finally got to start a family of his own, it warmed our hearts to see him given the chance to make his greatest dream come true, after all he'd been through. Yet several readers of The Cursed Child believe he made a hash of it. Did our favourite boy wizard become a bad parent? I would never have believed it possible, but having read the play, I have to admit there's quite a bit of evidence.

1) His best efforts backfired because of his self-focus
At first I thought making his son the gift of his baby blanket was a meaningful and touching gesture. My daughter is the one who immediately got Albus' point of view. The gesture was meaningful to Harry, but not to Albus. He told his father, 'James and Lily got decent things which they both wanted. I can understand why you'd give an invisibility cloak, and fairy wings, but what makes you think I'd want this moldy old relic from your past?' Maybe Harry didn't plan his gift with the recipient in mind. He made the classic mistake of choosing a gift he would value himself, rather than one the recipient would want. Albus was being belligerent, but you have to understand the cryptic language of teenagers to know that he was really saying, 'You just don't get me, Dad!'

2) There's that horrible thing he said!
We're all just human, but sometimes teenagers can get away with behaviour which parents can't. Albus blew up and shouted, 'Sometimes I wish you weren't my father.' Without missing a beat, Harry responded, 'Well, sometimes I wish you weren't my son!' I think there was a collective gasp of horror around the world. We all blurt things we shouldn't sometimes, but Harry, you should never say that to one of your children, not even in a spirit of impetuous retaliation. Even though he straightaway said he didn't mean it, his words set off a lot of damage, which reverberated through the rest of the play.

3) He's clueless about what's important to his son.
Harry's reactive decision earns him no fans at this point. Bane the Centaur mentions 'a dark cloud' hanging around Harry's son, and Harry instantly makes the blind assumption that Bane is referring to Albus' best (and only) friend, Scorpius. He thinks demanding an end to the boys' friendship is a wise move on his part. Harry reasons that since there are dark rumours concerning Scorpius' true parentage and his surname is Malfoy, that's all the evidence he needs. He's just protecting his family. Right?

No way, not at this stage! The boys are 14 years old, and they've been best friends since they were 11. That's three years in which Harry could have taken an interest in his son's social life, and made an effort to get to know his only friend. If he'd truly done that, he would have quickly discovered that Scorpius is warm-hearted, generous, and Albus' only positive peer group member at school. If he'd been up to date with his son's life, he would have rejected his fleeting suspicion as ridiculous. But his misguided leap to the wrong conclusion proves that he was seriously out of touch with what was happening in Albus' world. Sure, we could try to excuse Harry by reasoning that he's a busy ministry employee with a lot of other things on his mind. Well, read that sentence over again, and you'll see it's no excuse.

4) He has some of the worst, most devastating lines of the whole play.
They are all short and brutal. And they are all tied in with his misguided parenting.

'Sometimes I wish you weren't my son.'
'Well Minerva, you never had any children'
'Draco, are you sure he's really yours?'

Harry, you need to learn some people skills, seriously!

5) He becomes an overbearing dictator for a short time.
His delusions make him do some truly horrid things. He cuts Professor McGonagall's feelings to the quick (See Number 4). Then he demands that she use the Marauder's Map as a surveillance tool to make extra certain the two boys never communicate. Even Ginny tells him he's lost the plot. And we hate him keeping the boys apart, because we have enough evidence to see things clearly. Scorpius has stolen our hearts. That plucky little optimist has had enough to contend with in his short life, after the death of his mother, on top of the vicious rumours he's faced all his life. Anyone who makes things worse for him deserves our wrath. Shame on you, Harry Potter!

And finally, just to add insult to injury ...

6) Draco Malfoy is always around to show him up.
Draco never professes to be the perfect parent himself, but at least we see him trying and succeeding in some of those areas where Harry falls short. He comes across as more sensitive and hands-on in his parenting approach. He's open to the idea of his son forming a close bond with the son of his old enemy, if that's what it'll take to make Scorpius happy. He hates to see Scorpius in tears, and takes immediate action to confront Harry and demand why he'd keep the boys apart. (See Harry's response to him, too. 'No, I'm not keeping them apart.' That's an outright lie) Draco even seems to be in touch enough with Scorpius' social life to understand his best friend too. He grasps how Albus ticks well enough to warn Harry not to lose the boy. The two former foes always had rivalry going on, but whoever would have expected Draco to top Harry in the challenge called parenthood?

When the pair of them had a wand duel over all this, I found myself cheering whenever Draco got a stroke on Harry, just on principle. After what Harry said to set it off, (see Number 4), Draco seemed so clearly in the right. Yeah, I know. It's got to be one of the biggest role reversals I've come across in literature!

So sadly, I have to agree that the people who think Harry became a bad dad do have a case to back up their statement. I was sad to have my rosy picture of the boy who lived tarnished like this, but I could also see these glitches are consistent with character traits he displayed in his youth. Back then, Harry's impetuous streak, quick assumptions and hot way of bursting out before he thought were endearing at times. But as a parent, they cause problems for him, at least where Albus is concerned. 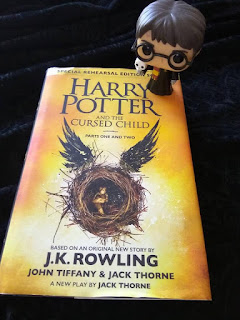 But the best features of Harry's character are also present in the play. He's not too proud to feel sorry and back down when he sees he's been mistaken. (I was wrong to keep you away from Scorpius.) Any father who can make an apology deserves a pat on the back. He can recognise good advice and take it on board, even when it comes from his former enemy. (You may also enjoy Can Sworn Enemies ever become Friends?) And best of all, he genuinely loves his middle child dearly, and is willing to do whatever it takes to bridge the gap between them, when he finally wakes up enough to see it's become a problem. Overall, aren't these the sorts of traits which actually make a parent good? Maybe it's not such a terrible thing to show that even heroes may have feet of clay. And how encouraging for any parent who's ever done silly things (and who hasn't?) to see that even heroes may relate to us.

In the face of all this, I still love you, Harry. You're a bad parent, but at the same time, you're also a very good parent. And doesn't that describe many of us. What better incentive to just keep doing our best, because tomorrow is always a brand new day.