Meet a forgotten heartthrob from 1836


As I promised when I reviewed The Pickwick Papers, I'm going to give this young man his own feature post. Although his name was on everyone's lips back in the day, most modern readers probably don't recognise the name Sam Weller. Even Dickens' biggest fans probably have the names of other characters spring to mind. But since he's said to be the character who first made Charles Dickens famous, Sam deserves more of the limelight than he's getting. Plus, he's really delightful.

I'm surprised, in a way, that he was such a huge hit in his time, considering his position in society was lower than several of his readers. He has a way of highlighting some of the silliest aspects of life in the Victorian era in a very good-humoured way, without appearing that he's teasing. I have to wonder if the readers realised they were the butts of subtle jokes, or did they know in their secret hearts that their society really did have laughable characteristics? Sam's popularity might have been owing a bit to what I like to call 'The Emperor's New Clothes Syndrome.' Nobody wanted to admit the drawbacks of their social system for fear of being labelled eccentric, but they could air their grievances through a proxy. 'I didn't say it, Sam Weller did.'

Maybe he offered free-thinkers a chance to admit what they really thought, without owning it outright. That's the beautiful power of stories. If enough people love a character like Sam Weller, then a gentle revolution of greater humour and tolerance in the world may take place over time.

Here's a sample of Sam-isms, and why I found myself falling victim to his charm.

He's overflowing with witty catch-phrases and taglines.
These are all along the lines of '... as the actress said to the bishop,' but he comes up with them on the spur of the moment to suit specific circumstances and conversations. How could the young Dickens ever create a character like Sam Weller? You'd imagine that over the course of a 900 page novel, they'd dry up a bit, but he just keeps them coming.

'It's over and can't be helped, and that's one consolation, as they always say in Turkey when they cut the wrong man's head off.'
'I call that adding insult to injury, as the parrot said when they not only took him from his native land but made him talk the English langwidge arterwards.'
'I on'y assisted nature ma'am, as the doctor said to the boy's mother arter he'd bled him to death.'
'If you knowed who was near sir, I rayther think you'd change your note. As the hawk remarked to himself with a cheerful laugh, when he heerd the robin redbreast a singin' round the corner.'

He never pretends to be what he's not.
Mrs Craddock: Mr Weller, here's a letter for you.
Sam: Wery odd, that. I'm afeerd there must be somethin' the matter, for I don't recall any gen'l'men in my circle of acquaintances as is capable o' writing one.

He's independent enough to thrive anywhere.
'If I ever wanted anything o' my father, I always asked for it in a wery respectful, obligin' manner. If he didn't give it to me, I took it, for fear I should be led to do anythin' wrong through not having it. I saved him a world o' trouble in that way, sir.'

He's never cowed or intimidated by anyone.
Sergeant Buzfuz (during Mr Pickwick's court case): You were in the passage yet saw nothing of what was going forward? Have you a pair of eyes, Mr Weller?
Sam: Yes, I have a pair of eyes, and that's just it. If they was a pair o' patent double million magnifyin' gas microscopes of hextra power, p'raps I might be able to see through a flight o' stairs and a deal door. But bein' only eyes you see, my wision's limited.

He can put people in their place without their knowledge.
Mr Stiggins: I apprehend your nature is no softer for this chastening.
Sam: Wery kind to say so. I hope my nature is not a soft one. Much obliged for your good opinion.

He's always cheerful, no matter what his circumstance.
We first see him as the whistling boot cleaner at the White Hart Inn, who admits that he never recognises clients by their faces but rather by their footwear. It never takes much for Sam to grin and enjoy himself.

Bob Sawyer: This is pleasant! (During a drive in very rough weather.)
Sam: Wery. (Composedly)
Bob: You don't seem to mind it.
Sam: Vy, I don't exactly see no good my mindin' on it would do, sir.

He easily entertains himself.
There's always some cool, original reflection ticking over in his head. For example, he remarks that you never see dead postboys or dead donkeys lying in the street. 'Vithout going so far as to assert donkeys and postboys are immortal... I'd say wenever they feels theirselves getting stiff and past their work, they just rides off together, wot becomes of 'em nobody knows.'

Mr Pickwick: The fact is he's my servant, but I allow him to take a good many liberties, for between ourselves, I flatter myself that he's an original, and I'm rather proud of him.

He's a huge contrast to another young main character.
Mr Nathaniel Winkle is one of Mr Pickwick's personal friends. He was born to a higher social class than Sam's, but is easily confused and intimidated. He forever attempts to present himself as more confident and competent than he really is, which puts him in many awkward situations. Nothing quite beats the humiliation of a bluffer who has just been exposed as a sham. And it happens to poor Nathaniel repeatedly.

Winkle: These - these are very awkward skates, ain't they, Sam?
Sam: I'm afeerd there's on orkard gen'l'man in 'em, sir.

(I think maybe their family dynamics have something to do with it. Old Tony Weller, the coach driver, is an older, tubbier version of his son Sam, while the senior Mr Winkle comes across as a bit of a cold, family dictator who withholds his approbation unless his son jumps through his hoops.) 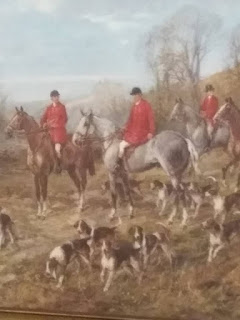 Modern readers might wonder, as I did, what the brilliant Sam might have made of himself if life had offered him the chance to be anything other than a servant. Being born into the gentry might have changed his character completely, but the things we appreciate most about him might never have had a chance to blossom under more favourable circumstances. And the question is whether he would even want to be elevated to a higher station if he had the chance.

I think the secret of Sam's contentment is rooted in his perceptive thought life. He's not blind to the ridiculous traits of some of his social superiors, and the impressions they attempt to convey. Maybe that's why he's so free of personal ambition. I can easily imagine him wondering who would even want to be one of them, playing their silly games. Perhaps Sam comes across like a breath of fresh air simply because he's happy being himself. He sums up his life's philosophy with only four words. 'Whatever is, is right.' What a great way of encouraging us to make peace with ourselves and our circumstances. This young man goes up on my list of people whose attitudes I most admire. If you want to make the commitment to read the whole enormous book, your reward will be getting much more of him.