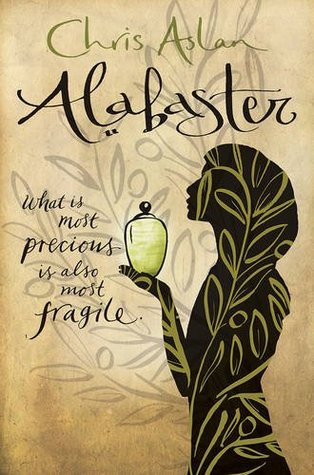 Maryam is stuck in an abusive marriage, living with her in-laws, in a conservative, toxically religious Middle Eastern setting. A few years back, her father was given a jar of priceless perfume by a dying leper and it seemed as if their fortunes would improve, but then Maryam’s father contracted leprosy and was exiled by the village. Maryam and her brother, Eleazar, and sister, Marta, experience the shame and ostracism this brings. The precious jar that was meant to bring them freedom, but it only seems to have brought destruction. But rumours abound concerning a new doctor; perhaps hope is on the horizon…

MY THOUGHTS:
I thought I'd read enough novels based on Bible stories for the time being, but this one slipped past my guard. It's sneaky, since the title, cover and blurb give no indication that that's what this is. Neither do other reviewers, so hopefully I'm not being a spoil sport, or breaking some unwritten code. But I wasn't far into the story when the identities of the two sisters and their brother dawned on me. They are none other than Mary, Martha and Lazarus. Their names have been changed slightly to Mariam, Marta and Eleazar, to reflect their ancient Hebrew roots, but it's them alright.

There was a point around the 80% mark when I lost my impetus just a little. Since there were only a couple of Bible incidents about this family that hadn't been covered yet, I could predict what was coming. That's why I was having a break from biblical retellings in the first place. They're not necessarily page turners, but I was happy enough to pick this one back up in my own time.

It's not a total rehash of what we know already. This novel presents several possible scenarios of its own, including how such a lavish alabaster jar came to such a humble family in the first place. That really highlighted how special it was, and what a huge sacrifice the girls made when they decided what to do with it. There's also Mariam's marriage, their father's plight, and Eleazar's attitude before he thought things through.

The harsh New Testament times are really brought to life. A neighbour's bad fortune leads inevitably to nasty gossip and speculations, as people generally wonder if they've sinned. It's sad to read how the townsfolk use their interpretations of the Holy Scriptures as weapons to justify their mean spirited attitudes. It also highlights the immense desperation sufferers must have felt for their prayers to be answered. On top of whatever grief they were already going through, they had the added pressure of knowing that if no evident relief was forthcoming, they'd look like unworthy sinners. The time was surely ripe for the arrival of Jesus, with his message of grace and his new example of being God's hands and feet. (He was never called by name in Mariam's narrative. It was always just 'the Teacher' or 'the Doctor')

It was nice to see the two sisters depicted as close. I've seen other stories which give the impression that Mary and Martha might have been at loggerheads all the time. This one shows them generally on very loving terms, but Martha's nerves snapped because of the pressure of an unusual day. I like to think that's closer to the truth.

I really wish novels came with fragrance. The description of the spikenard once the jar was opened sounded sublime, and I badly wanted a sniff! Who remembers the old scratch and smell books for children? A story like this makes me want something similar for novels, since there's no way we can indulge our curiosity by going to buy spikenard from the local shop, if we could even afford it. Someone make scratch and smell books for adults, please :)

Thanks to Lion Hudson and Net Galley for my review copy.

If you like to compare and contrast, I've reviewed another retelling of this story here.
And here are more thoughts about novel ways of retelling the same story.
Posted by Paula Vince at 5:00 AM