'The Old Man and the Sea' by Ernest Hemingway 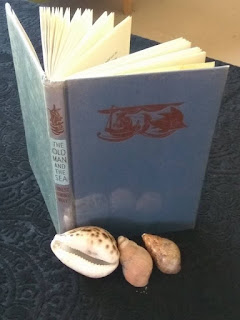 It is the story of an old Cuban fisherman and his supreme ordeal: a relentless, agonizing battle with a giant marlin far out in the Gulf Stream. Using the simple, powerful language of a fable, Hemingway takes the timeless themes of courage in the face of defeat and personal triumph won from loss and transforms them into a magnificent twentieth-century classic.

I choose this for the 2017 Back to the Classics challenge, in the category of a twentieth century classic.

It's is actually quite a short novella. Have a look at the close-up picture on the front of my copy? That's the crux of the whole plot. Now you don't need to read it.

Just kidding. Here's a summary, and I won't worry about avoiding plot spoilers for something as short and famous as this. Santiago is an elderly Cuban fisherman who's considered bad luck because he's had no catch for 84 days. The parents of his young helper, Manolin, have ordered their son to join a luckier boat instead. One day out on the sea alone, the old man manages to hook a mighty, 18-foot long marlin who defies getting reeled in and drags him way out to sea. Neither man nor fish are willing to give in, but finally Santiago manages to kill the beast. On the way home with his prize, sharks pick up the scent and rip its bones clean. That's it, folk.

I could get away with a one sentence review. 'What a bummer!' 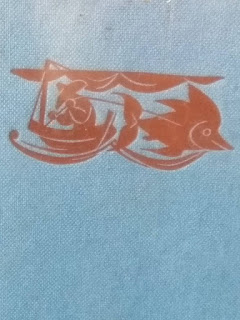 Naw, since this little tale won the Pulitzer Prize of 1953, I'll thresh it out a bit. Critics say you have to 'delve beneath the surface' to get the most from this book, which I guess is an apt analogy considering it's set on the sea. You'll find many educational websites attempting to convince us all how brilliantly multi-layered this story is. Smart people think it's a wonderful fable or allegory, where everything represents something deeper and more profound. But then I stumbled across a quote by Ernest Hemingway himself, claiming that this is a load of bunk. 'The sea is the sea, the old man is an old man, the sharks are all sharks, no better and no worse. All the symbolism that people say is s**t.' (The link is here if you are interested.) Okay, since he's the author, I'm more than happy to believe him.

Maybe my main impressions were about other readers' impressions. There's a lot of animosity on Goodreads reviews! A couple of people wrote something like, 'Just cut the line, why don't you? Put us all out of our misery.' Then angry fans ticked them off in the comments for being so flippant about such a magnificent book, yada, yada, yada. 'It's people like you who make the world such a shallow place' (Another sea analogy, whether or not they realised it).

I understand the 'cut the line' mentality. In our times, we're saturated with messages to chase our dreams and refuse to settle for less than the very best. It causes a lot of prolonged stress and suffering when perhaps we really should give up. But cutting the line never once crossed Santiago's mind. He lived in a simple culture and had the fatalistic belief that he was born to be a fisherman, like most of his neighbours. Often we sense when to quit, but if passion or enthusiasm for anything still drives you, then Santiago proves that you may always have more reserves of strength up your sleeve than you think. But having said that, I'm happy to live in a place and time where we can decide to cut the line in our own ways without losing face or self-esteem.

A few reviewers wrote, 'I was forced to read this for school. It sucked.' That makes me sad about educational curricula. Making teenagers read and write about characters whose mindsets are poles apart from their own often ends up stirring nothing but resentment. Sure, bureaucratic book choices are meant to encourage students to feel empathy for different people, but it often backfires and gives them the impression that they 'hate' a particular author, who they just weren't ready for.

I clearly remember the 16-year-old I used to be, and know I would have hated this book too. Back then, I wanted to read about cheerful things like romance and relationships, and not the melancholy musings of lonely old men floating on the sea. I wanted to focus on ways we could find happiness and fulfillment. I didn't want to hear that adversity is the flip side of the coin and just as likely to be in store for us. Now that I'm middle-aged, I don't mind reading about people making peace with adversity, because I've experienced more ebbs and flows of life first hand (hey look, I made an unintentional sea analogy too). But boy, when I was 16, Santiago's story would have seemed like a waste of a couple of days, both for him and me. I think it's time we stopped trying to fire poor kids up about certain stories way before they're ready to hear them, and then adding insult to injury by abusing them for giving their honest impressions.

Okay, now for my impressions about the actual book :) Since Hemingway himself said that symbolism was you-know-what, I won't go that way.

The question of personal drive is interesting. At one stage, Santiago can't shake a niggling feeling that killing such a noble fish was a sin. Reason tells him that of course it wasn't, since it was his livelihood. He hoped to keep himself alive and feed several people. But he can't deny the part of him that did it for pride and to make a name for himself. Given that he came to love that plucky fish and consider him a brother, it seems particularly brutal. Can one single act, such as killing a fish, be a good or bad deed depending on the motivation? No matter how good we may look to others, we know deep in our own hearts what drives us to do things.

Santiago sees the sea as a beloved feminine entity, capricious and beautiful in its apparently random giving and withholding of favours. He's old enough to have learned that although life doesn't always seem fair, grumbling about it is never, ever helpful. I think of several wise sages' advice to never let either adversity or good fortune sway our equilibrium. Keep your hearts on an even keel (hey, another one), because both good and bad come and go. Santiago suffers great exultation and great loss within the same fishing trip. If we remember that it's wise not to get too overjoyed or too depressed about our own changing times, we'll be doing well.

Finally, I guess it shows you never know how any event will look from a broader perspective. No doubt when Santiago first got back to shore, those couple of days out at sea would have seemed like a write-off. and serious lapse of judgement. In the excitement of the chase, he wasn't thinking straight. Surely he'd been around long enough to guess that tugging a bleeding marlin behind his boat would be an instant shark magnet. But hey, his story won millions of fans and a major literary prize. It would be nice if we could look back at our own most face-palming moments in a better light someday, even if it's just a lesson we learned.

Overall, it really is a quick and simple story, and anyone could be forgiven for thinking that Ernest Hemingway got an easy win, when you compare it to some of the other lofty Pulitzer Prize winners. Perhaps those fickle winds of fortune were blowing his way in 1953. But maybe he had the last word when his fellow author, William Faulkner said something disparaging about his simple style. I believe it went something like this.

Faulkner: Poor Hemingway. He has never been known to use a word that might send a reader to the dictionary.
Hemingway: Poor Faulkner. Does he really think big emotions come from big words?

Touche! This story was made into a black and white movie in 1958, starring Spencer Tracy. Has anyone seen it? I can't imagine how they could drag this out to a movie length, and I don't think I want to find out :)