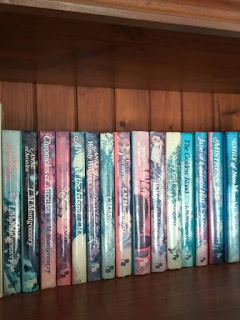 When I saw this week's topic from the Classic Remarks meme by Pages Unbound, I looked forward to it. But as a serious LMM collector from way back, I thought I'd add my own personal stipulation that it can't be Gilbert Blythe. He's so lovable, and has been such a media darling, it's too easy for anyone to call him their favourite by default. I wanted to dig deeper. This is a good chance to give some of Montgomery's other, equally dashing heroes some exposure. I decided against the sexy, writerly types like Barney Snaith from 'The Blue Castle' or Andrew Stuart from 'Jane of Lantern Hill.' They're too similar in my mind, and I wanted to choose someone unique, and perhaps easily overlooked.

I narrowed it down to either Hilary Gordon from the Pat stories or Perry Miller from the Emily trilogy, but just couldn't decide. I resorted to a coin toss, and was quite pleased when the result was Perry, because he's possibly one of the most charismatic, but under the radar choices of all. OK, here goes.


1) He has a girl madly in love with him, and doesn't even know it.
It's not just any girl either, but the fiery, brilliant Ilse Burnley, best friend of Emily Byrd Starr. Fierce and independent from her neglected childhood, Ilse is in the habit of going straight out to get whatever she wants, but this boy is her stumbling block. There's nothing she wants more than him, but nothing seems further from her reach. For a start, he's never been shy to hide the fact that he fancies Emily. He never toys with Ilse though. His utter cluelessness about her true feelings for him makes him even more attractive to her. He believes she despises him, which is the impression she aims for, since she thinks she can't have him.

2) He's spontaneous and thinks on his feet.
During a candlelit college function, he was supposed to deliver a sensible talk on Canadian History. On the spur of the moment, he changes his mind and talks about all the candles he's seen in his life, which is so fascinating, his audience is spellbound. Wow, who can do that sort of thing off pat, with no preparation?

Mr Carpenter, the brilliant old country school teacher, actually discerned Perry's talent early on. 'Emily couldn't understand why he'd rage at Perry and denounce him as a dunce and a nincompoop by gad, because he had failed to give the proper emphasis on a certain word, or had timed his gesture a fraction of a second too soon.'

3) He's original and willing to take a chance.
Perry's instincts often don't pay off, but at least he's always ready to try something off the wall. He writes a Scripture reference at the end of his algebra exam, hoping to get a smile from the tutor, but instead, almost gets himself disqualified. He intended to write Matthew 5:7 (Blessed are the merciful for they shall obtain mercy) but accidentally wrote Matthew 7:5 (Thou hypocrite, first cast the beam out of thine own eye, then thou shalt see clearly to cast the mote out of thy brother's.) Mr Travers, who was rumoured to know much less about Mathematics than he professed, was understandably furious. That's just one example of Perry's risks which don't quite work out well. You've got to love him.

4) He manages to rise from very humble circumstances.
We first meet him as a little boy who lives with his Aunt Tom in Stovepipe Town, the slum district. Getting a hired boy job with Jimmy Murray of New Moon is the start of his plan to improve his prospects, but Perry faces contempt and prejudice for his background every day of his life. He knows he's the butt of jokes, but shrugs them off and carries on. He works hard to earn his way through college, and I'm doubtful if Emily, Ilse and Teddy ever really appreciate what a harder battle he faces. I'm not sure those three had his brand of maturity, which enabled him to not take things personally either.

Perry manages to get into Law and Politics, and we trust he'll be an honest politician.

5) He's brave and takes immediate action
In his introductory scene, he saves Emily's life from a raging bull by throwing himself in the beast's path to distract him. He sticks up for her when Miss Brownell, the nasty school teacher, makes untrue accusations, which is equally courageous in a different way. Even accepting the headmaster's formal dinner invitation, when he has no idea about table etiquette, is brave in its way. Although Emily always preferred Teddy over Perry, Teddy never really performed heroic deeds of the same calibre.

6) He's very handsome to boot.
This is clear when poor Ilse decides to poke out the eyes of the first professional photograph Perry has ever been able to afford. She can't stand the way his image looks at her, with its truculent stance, wavy hair and gorgeous face. It's the only come-back she has, in light of the fact that she still wants him so badly.

Ilse: Never had such satisfaction as boring your scissors through those conceited orbs gave me. How I hate Perry Miller.
Emily: I thought you told me you loved him.
Ilse: It's the same thing. Why can't I get that creature out of my mind? I won't say heart. It's too Victorian to say heart. I wish he had a hundred eyes so I could have bored them all out. 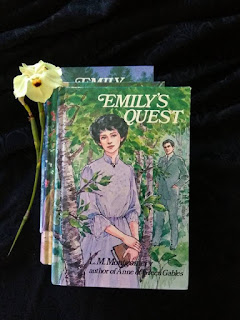 7) His eventual romance is a delight.
I won't divulge such a super-duper plot spoiler, but his eventual union with Ilse involves her rushing away from a significant event to be near him at a crucial moment. Although Emily and Teddy's was intended to be the chief romance of the trilogy, I honestly preferred Ilse and Perry's.

I love how she eventually changes her tune from, 'Oh well, life's good without him,' to 'If I were dead and Perry came and looked at me, I'd live again.'

Or Perry's surprise when Emily finally blurts out that Ilse has been in love with him all those years. 'I'm as tickled as a dog with two tails to think that Ilse ever thought that much of me, at any time.'

I'd recommend you read L.M. Montgomery's trilogy, comprised of Emily of New Moon, Emily Climbs and Emily's Quest, back to back. It's such a joy, and you'll get plenty more of these awesome characters and the ups and downs of their lives. They sure manage to twist things up before everything falls into place.

(And on the subject of L.M. Montgomery heroes, if you'd like to see my road test of how good old Gilbert stands up against Jane Austen's Mr Darcy as everyone's favourite book boyfriend, you'll find it here.)  And for lovers of L.M. Montgomery, you might like Anne with an E - Imagination is Crucial.
Posted by Paula Vince at 5:00 AM