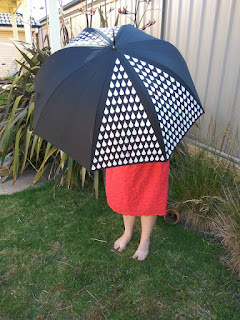 I came across an interesting bit of trivia. Did you know that today, February 10th, is National Umbrella Day in the USA? Here in Australia, umbrellas are most often the last thing on our minds this time of year, but we've experienced some reasonably wet summer days, following a year of floods and deluges throughout 2016. So I thought I'd celebrate by giving this day the Vince Review treatment.

During one of our torrential downpours when my eldest son was off to Uni, I told him to take an umbrella. He refused, because, to quote his own words, 'they look wimpy.' I wondered if others share his opinion. When I put the question out on Facebook, another young man agreed with him. 'I'd rather have a wet jacket than carry around a wet stick.'

It made me wonder whether this is the general opinion of the younger generation. After centuries of being our reliable friend, it's sad to see the humble brolly getting such a bad rap. It's time to elevate its status again. Judging from years of fiction, I'm not the only umbrella fan. They feature in stories for a variety of reasons. Maybe the classic old line, 'You'd better share my umbrella,' springs to mind first, but I'm here to prove that bringing us together by keeping us dry isn't their only purpose.

1) The Lion, the Witch and the Wardrobe

In Lucy's first foray into Narnia, she bumps into the little faun, Mr Tumnus, and makes him drop his armload of parcels because he's also juggling an umbrella. I read that C.S. Lewis' vision for the land of Narnia was helped by a strong mental picture he had of a two-legged faun standing in the snow beneath a lamp post, carrying an umbrella.

2) Mr Meddle
Anyone who read Enid Blyton's stories of this meddlesome chap might remember that he had a crabby Aunt Jemima, who found it hard to put up with his nonsense. She often used her umbrella to whack him with, which seemed like a pretty good purpose in her case.

3) How I met your Mother
Who watched this sitcom while it was running? Ted Mosby was telling his two teenagers rambling stories about how he met their mother, but his anecdotes always seemed to get off the track. For such a long time they never actually introduced her, but the appearance of her little yellow umbrella was always a bright indicator to viewers that she might be near.

This super-nanny had a magical umbrella which took her places when she gripped the handle. She'd wait until her work at a place was done, and zoom off again. She became such a legend that the sight of a little Victorian lady flying through the sky beneath the canopy of her brolly evokes warm feelings in many hearts.

5) Harry Potter
Talking about magic, remember Hagrid's giant pink umbrella? It was actually a contraband wand, because he wasn't officially meant to carry one. Since he'd been expelled from Hogwarts, he'd forfeited his right to wield a wand. It turned out to be a pretty nifty disguise.

6) The Umbrella Man
This is one of Roald Dahl's lesser known stories. A little girl and her mother came across a man who'd built himself a sneaky but successful business by stealing umbrellas, then selling them to poor soaking suckers who were caught without. As the mother says, 'I'll bet he looks forward to rainy days.'

7) Little Women/Good Wives
I want to finish with one which does serves a traditional role (bringing people together by keeping them dry). This is arguably the cutest and best of all. Jo March and Professor Bhaer first declare their affection for each other beneath his umbrella in the driving rain. Both were laden with parcels, splattered with mud, and knew there was a long way home ahead of them. But to them, the situation was perfect. 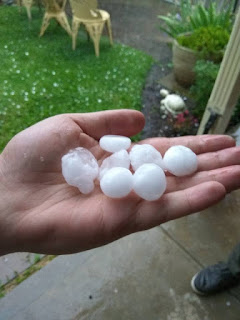 I hope my list may convince anyone who might feel inclined to grumble about umbrellas that they are great things to own. They've been weapons, magical devices, clues in mysteries, fashion statements, and modes of transport too.

However, do you think an umbrella would be any good against hailstones of this caliber? We didn't put it to the test, but this photo was taken during a freak storm in my parents' backyard. The stones dented their tin gazebo roof, so I can only imagine what they might have done to umbrella fabric. I just thought I'd share my proof that anything is possible in Adelaide.

Where do you stand on the umbrella question? Do you use them or not?

Happy Umbrella Day
Posted by Paula Vince at 5:00 AM