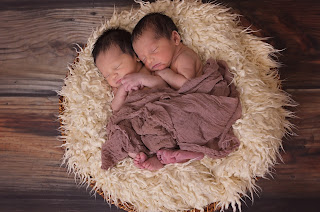 This week, I'm accepting the freebie topic from The Broke and the Bookish, Top Ten Books to Read if your Bookclub likes ___ (we get to fill in the blank). I chose twin stories.

Twins are reasonably common to the extent that we've all surely known a set or two, and they also feature prominently in literature. They are everywhere. Anne of Green Gables gave birth to some twins, as did Meg from Little Women. Maybe it's because they're highly interesting. Scientists have studied identical twins who have been separated from birth, trying to figure out the extent to which a person's character is formed by DNA or environment. There have been some amazing correlations we'd never expect, indicating how much of our personalities may be shaped by biology.

In stories, twin tropes are rife. There are twins who have strong, supernatural ties to each other, twins who long to break the stigma that they are duplicates of the same person rather than individuals in their own right, and the somewhat corny 'evil twin' scenario. The bad guy goes around causing all sorts of havoc, all the while being mistaken for his good, identical brother. Even the Friends sitcom played on this with Phoebe and Ursula Buffay, both played by Lisa Kudrow. Since there are heaps to choose from, I've chosen ten stories in which the fact that they're twins becomes an issue in the story.

First, I'll start with some ancient sets of twins from legend, mythology or Biblical history.

1) Romulus and Remus
These baby princes were abandoned by their cruel uncle in the deep dark forest. They were discovered by a pack of kind wolves who cared for them, until a lowly shepherd discovered them and brought them up. When the boys became adults, they built a large town on top of 7 hills. Romulus proclaimed himself king, which made Remus indignant, so Romulus charged at him with his spear and killed him. Then he named the town Rome, after himself, and nobody disputed him.

2) Jacob and Esau
These Biblical sons of Isaac and Rebekah were at war with each other while they were still in her womb, and it never stopped. Outdoorsy Esau sold his birthright as eldest twin to his more sedentary brother for a bowl of stew, then regretted it. Later, Jacob tricked their blind old father into bestowing the blessings of first born on him instead of his brother. He had to flee Esau's wrath for several years, but they eventually reconciled, and each became founders of huge nations.

3) Castor and Pollux
These are the mythical brothers star gazers may recognise as the Gemini constellation. They were born to one mother (of course) but with different fathers. Castor was the mortal son of the King of Sparta, and Pollux was son of the god Zeus. The legend goes that Castor was killed in battle, and Pollux asked his father Zeus' permission to share his divinity with his brother forever. So it seems not all ancient twin stories involve antagonism and hostility.

And now for some more popular and/or modern stories

4) Nathaniel and Oliver (from Too Pretty)

My friend, Andrea Grigg wrote this touching story. Nathaniel is the hero and his identical twin brother Oliver had passed away long before the story started, yet he is still an enormous presence in his brother's life, and hence in the readers' too. Oliver was shown to be the more outgoing and mischievous twin, and his absence impacts Nathaniel in more ways than he'd ever anticipated. It's a fascinating study of whether or not losing a beloved twin is really like losing part of yourself. My review is here.

5) Adeline and Emmeline (from The Thirteenth Tale)
These young girls were brought up in a fairly feral manner. I didn't enjoy this book overall, but did find the concept of receiving a double portion interesting. Adeline seemed to have inherited both her and Emmeline's share of aggression, while Emmeline was the gentler of the pair. There are some fierce moments, when Adeline objects to Emmeline showing an interest in anything outside their shared life together. My review is here.

6) Percy and Saffy (from The Distant Hours)

These two were introduced as very ancient ladies, and the story delves back into their past and shows that their established patterns never changed. Percy was very much the alpha twin, straightforward and practical, while Saffy was more retiring and arty. The events that transpire in the story show how far one twin may go to protect another. My review is here.

7) Cath and Wren (from Fangirl)

It's a contemporary tale about starting university. These girls are identical in looks but not personality. Cath is the text book introvert who finds everything overwhelming and awkward. Wren tends to be more of a party girl, wanting to throw off the shackles of attachment to her sister and live life to the fullest. Unbeknownst to everyone, Cath is huge on the internet, with  thousands of followers who enjoy reading the fan fiction she writes under an alias. I groaned when I read how these twins happened to be named, like two halves of a whole. When you say CathWren fast, what does it sound like? Yep you got it, Catherine.

These are the fraternal twins of very difficult and demanding parents. They become wrecks in their own ways. Tim gets heavily involved in drugs and substance abuse while his sister becomes a nervous wreck of a perfectionist whose desire to succeed academically consumes her whole life. What's fascinating is how far she's willing to go to achieve her goals and how she chooses to involve her brother. Their parents regard her as the 'good' twin, but is it really so cut and dried? There's a fair bit of coarse language in their story. A bit too much maybe, but the relationship dynamics are interesting. My review is here.

And finally, no I'd never forget them.

They're outstanding, with their bright red hair and dorky matching jumpers. Their quick wits and sharp humour delight everyone. They never attempt to be anybody but themselves. And what I love best about these two is that they show it's okay to choose a unique path and be successful in your own way. They never pretended to be interested in academic work (willing to fall short of Bill, Charlie and Percy who went before them)  but turned out to be sound businessmen when their joke shop took off, earning them a good living. The end of Deathly Hallows was gut wrenching. How could George every recover the loss of his wonderful twin.

Actually, while I'm at it, I'd better mention the other set of Harry Potter twins.

10) Padma and Parvati Patil
These sisters show that not even close siblings always get sorted into the same Hogwarts House by the sorting hat. Parvati was assigned to Gryffindor with Harry and his crowd, while her sister Padma became a member of Ravenclaw. From time to time Harry and Ron considered them as romantic interests, especially when they needed to find partners for the Yule Ball on short notice. In a dual timeline presented in The Cursed Child, Ron actually married Padma instead of Hermione. Needless to say, that had to be set right.


Have you any other twin stories to suggest to us? Or can you add your opinions about any of those I've mentioned?
Posted by Paula Vince at 5:00 AM