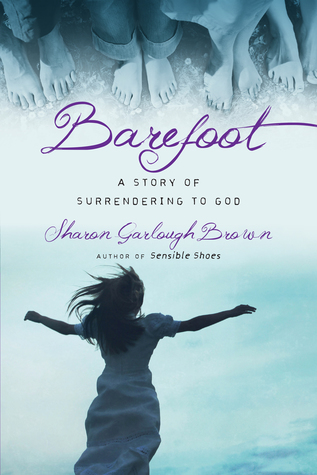 The women of Sensible Shoes face unexpected turns in their spiritual journeys in Barefoot, the third book of the Sensible Shoes series. Having been challenged to persevere in hope, can they now embrace the joy of complete surrender?
Mara: With two boys at home and a divorce on the way, can she let go of her resentment and bitterness and find a rhythm of grace in her "new normal"?


Hannah: With Nathan by her side, can she let go of expectations—and even her reputation—as she charts a new course?
Charissa: As her approaching due date threatens to collide with new professional opportunities, can she let go of her need for control and embrace the unknown future with trust?
Meg: With disappointment over broken relationships and unfulfilled dreams, can she let go of her fear and worry in the face of even greater challenges that lie ahead?
Join the women of the Sensible Shoes Club in a poignant story that reveals the joy that comes from laying our lives at the feet of God and standing barefoot on holy ground.

MY THOUGHTS:
This novel concludes the trilogy about these four women who met when they decided to attend a sacred journey workshop, and ended up forming their own Sensible Shoes club. You might need to grab a box of tissues for this one. It crosses over into the sort of story I don't usually choose to read (because there's enough emotionally draining happenings in any person's life without adding to it by getting heartbroken over the plights of fictional characters we've grown fond of), but since I'd become so invested in the lives of these four already, I thought I might as well finish it.

Once again, I was struck by lessons we learn from the experiences of others.

The story deals more with what it calls socially acceptable forms of idolatry. There's Charissa's thirst for honour and recognition in the academic world, and Hannah's clinging to the Protestant Work Ethic because of her longing to be appreciated and affirmed. It's good to bring these things to the light of day and recognise them for what they are. Perfectionism and helps ministries are clearly easy to regard as good, but not if they're rooted in how we think others perceive us.

There are probing questions about how we deal with difficult family members. Hannah wonders whether to mention painful aspects of her past to her parents (and I was glad by her conclusion), Meg deals with outright rudeness from her sister and daughter, as well as having her beliefs treated with contempt, and Charissa copes with pressure from a mother-in-law whose mindset is poles apart from hers.

Then there's poor old Mara's rejection issues, which she's finding take longer to put behind her than she expected, even though she's acknowledged them. Her first hand lesson about bitterness makes an interesting twist to the tale, and maybe a whack in the gut for any of us who might be dealing with condemnation from others, as well as condemning others in our hearts at the same time.

Some interesting extras are worth making a note of too. Who knew there's a longer version of the Serenity Prayer? Most of us probably only know the first little bit, but it's written in its entirety in the story. There's also an impacting, short little parable about a man who curses and praises the dead.

The finish wraps up some things and leaves others open, especially concerning the fates of secondary characters. What does Nathan do about Laura? The Becca and Simon issue is still unresolved. And how about Mara's attitude toward her youngest son, Brian? I was noticing unconscious resentment from her toward him in the previous books, so I'm glad this one picked up on it. I don't mind having these things left to our imaginations, since the books are a slice of life, and that's what life is like.

Altogether, even though it dealt with themes which I wasn't prepared for, it still gets high marks from me because of the thought it evokes.

Thanks to Net Galley and Authentic Media for my review copy.