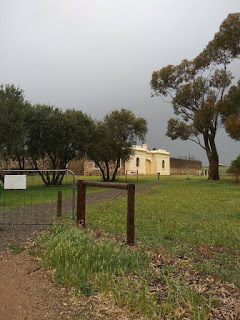 I recently paid a visit to the old Redruth Gaol, near the South Aussie town of Burra. It was a rainy day without another soul in sight, adding to the spooky atmosphere. I discovered that between 1897 and 1922, the place was used as a Girl's Reformatory School. The stories posted up all over the walls made a wild and wacky read. Some girls were sent there because they fell pregnant, and one tried to commit suicide with rat poison from the kitchen. One group of girls managed to climb onto the roof and perform an impromptu strip tease for passers-by. Another bunch locked themselves into a room and attempted mutiny, unless their demands for a particular member of staff to leave were met. And a couple of girls escaped for a short time, something none of the grown men in bygone years had ever managed. They posed as boys and scoured the district searching for work.

One wall was filled with extracts from letters by the female supervisor to several parents, reporting all the stress and mischief their daughters were causing. Those girls had amazing imaginations when it came to cooking up trouble, and I didn't envy that lady her job one little bit. In fact, I left the place with a new respect for the female heads of institutions. Having to be in charge of several others without losing their respect or your own control is something I'd never be able to pull off. It started me reflecting how many of these admirable women show up in the stories we love, so today's list is meant to be a sort of tribute to them.

I'll start with those who may be considered more along the lines of 'normal', and they'll gradually grow weirder. I'll stick to nice, or well-meaning examples, because it's a post with the intention to honour, so no Trunchbulls or Umbridges here. They deserve a post of their own some day. Here goes.

She was the director of the old house in Paris all covered with vines, where little Madeline and several other girls lived happily together. Since Miss Clavell was possibly more motherly and kind than several of the parents who sent them there, it's no wonder they all got along so well together. We used to watch the TV series based on the books all through the '90s. Does anybody else remember how the little girls used to chant, 'We love our bread, we love our butter, but most of all we love each other'? See my review of Madeline.

Did you follow the life of Jo March from Little Women through the next three books, as she got married and set up a boarding school with her husband? They named it Plumfield, and several of their students were orphaned or destitute boys. The students gave Jo and Frederick some challenges, but they weathered them and and made exemplary young men out of (almost) all of them. Louisa May Alcott made it clear that the flops weren't Jo's fault. One of the biggest themes was how the younger generation came to rely on her wisdom and sound advice. Her manner with them may come across a bit overbearing or condescending at times, but that's the nineteenth century for you.

3) Sadie Sillsby
This one is a more obscure choice. She's a young woman who was offered the job as matron of an orphan home, but it means she won't be able to marry her sweetheart. There are some good, behind-the-scenes glimpses of the skill and effort it takes to run such a place. I already knew it'd never be the job for me, but this novel just reinforced it. See my review of A Home for my Heart.

She comes across as a tartar who promises parents that she'll soon whip their recalcitrant daughters into submission. Secretly, she intends to nurture their eccentricities, which enables them to help in the war effort against Napoleon. Each of the girls in her care grows to appreciate her and willingly go along with the ruse that they're completely under her thumb. See my review of A School for Unusual Girls

All through the Harry Potter series, I had the impression our wise old friend Minerva would have been a great headmistress. She's totally fair and wise, balancing genuine affection for the students with a clear knowledge of their weak spots. She was clearly a better choice for the position than Umbridge, Snape or the Carrows, and I even felt she could have given Dumbledore a run for his money in many ways. It's good to see her finally get her chance in The Cursed Child. At this stage she was pretty ancient, but still proves that she has what it takes. See my review of Harry Potter and the Cursed Child.

This lady gave every drop of blood, sweat and tears she had for her beloved charges, prepared to do anything to keep them safe. Fortunately for them, her skill sets are astounding, to say the least. She nurtures the kids in a special time loop which protects them from the perils of bombs and bullies alike. Given the choice to sacrifice herself for their safety, she doesn't hesitate to put her life on the line. Later, she finds herself in the unenviable position of having to rely on the charges she'd always taken such good care of to rescue her. For these reasons, as well as being one of the strangest female heads, she's also one of the best. See my review of Miss Peregrine's Home for Peculiar Children.

So you see they're a motley bunch, with talents far out of my reach. The last two even have the ability to turn themselves into different animals, a cat and a bird respectively, and I can't help wondering whether pulling something like that out of the bag should be a pre-requisite for such a tough and thankless job. As always, I'd love to hear your thoughts about these, or suggestions if you have any more. Or maybe you've had experience with being in charge of children yourself.
Posted by Paula Vince at 5:00 AM