Book Boyfriends through the Generations 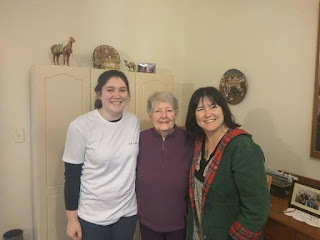 Today's post is in honour of my two guests. This month they both celebrate significant milestone birthdays which include the numeral 8. My daughter turned 18 on Remembrance Day, and my mother turns 80 tomorrow. I thought I'd return to the theme of our favourite men from books, examining whether or not readers' tastes and preferences may shift with the passing years.

MY MOTHER, VALERIE - THE BUILDERS
This is the name of the generation that was born before about 1942, and she was born in 1936. They're probably our most elderly living generation, and deserve to be listened to. Hard work was a fact of life for them, and they gave a lot without expecting an easy ride in return. Getting lost in a book was likely one of their only forms of leisure, and here are some of her favourites.

1) Mr Darcy
My Mum doesn't remember names easily, but his identity was clear from her description. 'That lovely chap who realised how snobby he was being and changed his ways, because he loved his lady so much. And he was also very handsome in that TV show.' I think Colin Firth had as much weight on her choice as Jane Austen, but it's easy to imagine the author had just such a face as his in mind for her main man when she wrote the story in the Regency Era.

2) Edward Rochester
I remember reading her this story in my teens, when I went through my Bronte phase. Every couple of lines she'd stopped to rhapsodise about how wonderful the leading man was. He'd been knocked around by life, turned cynical, but still had the warm heart to fall for the modest charms of a no-frills little heroine like Jane. Even when he made grouchy remarks, Mum loved him, so when he gave his famous declarations of undying love, she responded just how we're supposed to.

3) Gilbert Blythe
This was clear way back in my childhood, because my mother was the person who strongly recommended the Anne series to start with, and this boy was one of the reasons why. 'There was a lovely lad called Gilbert who teased her once, and she hated that, but she ended up marrying him.' Mum wasn't ever careful about hiding plot spoilers. That was something I had to learn on my own down the track.

Incidentally, I feature two from her list in the battle of the book boyfriends.
It just goes to show that some charm is timeless.


ME - GENERATION X
I'm one of those people who can remember being tiny in the 1970s. Scarier still, I attended High School in the 80s! I felt like a goldfish in a pool of sharks, and doubt I managed to make it out unscathed. Those felt like cutthroat times. As I often say, at least I had my books. Here are my favourite book boyfriends growing up.

1) Almanzo Wilder
The Little House on the Prairie TV series with Melissa Gilbert and Michael Landon was popular all through my growing years, but I loved the books most of all, devouring them time after time. Almanzo stole my heart when I was about 12. What's not to like about a cute, hard-working farmer boy who knew how to be romantic, although it wouldn't have been among the survival tips his father taught him. He set the bar high for future book boyfriends because you can't beat strong, thoughtful and sweet.

I remember a certain blistering heatwave when I visited the Flinders Ranges with my parents. I sat in the back of the car reading that episode from 'The Long Winter' when Almanzo and his best friend Cap dodged between dangerous blizzards, risking their lives to fetch the wheat that stopped the town from starving. I appreciated their heroics but also wished they could send a bit of ice and snow our way.

2) Hareton Earnshaw
I latched onto 'Wuthering Heights' when I was 15, but the person who intrigued me most was not Heathcliff but his rough-around-the-edges sort-of-adopted son. Although Heathcliff vowed that he'd bring the boy up the same harsh way he'd been treated to spite his old enemy, it really ticked all my boxes to see Hareton retain some generosity and compassion. It was as if Heathcliff was proving himself wrong with every demeaning trick he tried. As well as loving Hareton himself, I appreciated the irony of that.

3) Mart Belden
Don't laugh, but yes, I had a crush on Trixie Belden's teasing, goofy brother. I thought he was so smart, with his long words and provoking sense of humour. I probably started rubbed my hands together with anticipation whenever he walked into a scene. In later years when I revisited the Trixie Belden mysteries, Mart came off as an annoying, attention seeking show-off. But hey, he worked for me in my tweens.

MY DAUGHTER, EMMA - THE MILLENIALS
There's a sort of overlap with Gen Y, but being born in 1998, she fits both. This generation comes across a bit intimidating to mine at times, as they seem to be born both tech-savvy and decisive. They make quick judgments about matters of taste, and back them up with complete confidence in their own discernment. Here are some of her favourites.

1) Jon Snow
This 'Game of Thrones' hero is her clear winner, which says a lot for him since her walls and shelves are covered with fandom from far and wide. When I ask why she'd place him so high, she rattles off a list of instant praise. He's brave, caring, strong, considers underdogs, and is ruggedly handsome to boot. He also had an unfortunate start as a baby, so is himself an underdog in many ways. All of this refutes argument. This man is the total package for her.

2) Peeta Mellark
The modest, unassuming young hero from 'The Hunger Games' also makes it on my daughter's list. There's something about quiet devotion and a sacrificial nature which appeals to the young women the series was aimed for. I once commented that perhaps Peeta's rival in the romance stakes, Gale Hawthorne, is arguably the nicer looking of the pair (being a Hemsworth). Was I cut down to size! 'I'm glad I'm not as shallow as you are, Mum,' Okay, it's good to see that character is still a major priority for this generation.

3) Spiderman
She makes it clear that she's talking specifically about the version played by Andrew Garfield. It seems this young actor added a certain flair to the role, in her opinion. He wasn't just the standard, perfect super hero. He was funny, and also the type of person who makes nerdiness cool. And the romance in the movie was just the right amount.

MY CONCLUSION
So what are we to make of all this? Do fashions in book boyfriends change or not? On the strength of this, I really don't think they do. Their faces change, but the attributes which make our heroes lovable remain constant. People from earlier generations didn't have characters like Jon and Peeta, but when you compare them to those who were around, like Gilbert or Almanzo, they were similar types of fellows.

I know you'd have to ask more than three people for a complete study, but here are some findings which stand out to me. To qualify as a book boyfriend, a fictional character ought to be thoughtful toward others, and possess a certain amount of altruism. Being in the powerful position to be able to act on his good-hearted urges ranks high. Other traits which help include funniness, smartness, fairness and quick wits. They often display a redemptive arc during the story. And although good looks do earn ticks, a quick glance down this list shows that they aren't absolutely necessary. I'm sure those still to come in future generations will fit into the mold.

Have you any favourites of your own who may deserve to be added to this list of nine?
If you'd like more, see my earlier list of true heroes.
Or if you're a fan of enigmatic villains and redemptive arcs, you might like bad boys with depth.