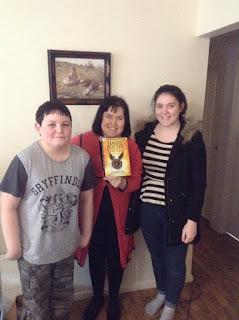 This is the true story of a wild goose chase that took place on Sunday, 31st July, 2016. The characters are me, my daughter Emma, and my younger son Blake. It's the international release day of the play script, Harry Potter and the Cursed Child, which takes place 19 years after the events in the series. The previous night, the screen play opened in London, and the book release is scheduled for the following day. As far as the kids are concerned, waiting for a couple more days is out of the question. Since I'm the last person to complain about visiting bookshops, I agree.

Stage 1
It's Sunday, and the three of us leave church to head straight down to Big W at Cumberland Park. Emma tells us they'd been advertising $15 copies, the cheapest anywhere. We walk in to see plenty of young people drifting around the aisles in wizard attire. Their job appears to be simply to add atmosphere and mingle with customers. There are plenty of earlier Harry Potter novels on the shelf, but no Cursed Child. Somebody tips us off, 'If you're looking for the new book, it's already sold out.'

We leave crestfallen. Emma tells me we must drive down to Dymocks in the city and pay full price after all, since they will be bound to have plenty in stock. 'They promised on their Facebook page that they'll have thousands and there's no way they'll run out,'  she says.

I wonder why Big W kept their costumed hirelings in the store, raising people's hopes just to be dashed. Wouldn't you think that once they ran out of copies, they'd tell them, 'You guys might as well go home'? We decide to make a stop at the Dymocks bookshop in Burnside Village, because it's fractionally closer than the city.

Stage 2
Even though Burnside Dymocks has a Harry Potter window display, the man wearing the Gryffindor tie behind the counter tells us none are for sale. I ask him, 'Do you know if any are still available in the city store?' He says, 'I just heard from a customer who said they're sold out there too.'

We leave crestfallen again. I'm ready to give up and head for the Hills, but the kids wheedle me into trying the city just in case. By now we are all very doubtful, but since we've come so far already, we decide we might as well.

Stage 3
When we enter the door of the city Dymocks, I catch the eye of Harry Potter himself. He's a young, dark-haired staff member wearing a wizard cloak, round glasses and a jagged lightning scar on his forehead. I ask, 'Do you have any stock left?' knowing I won't have to mention the name of the book I'm after. He says, 'Sorry, they're all sold out,' (which feels a bit ironic coming from a Harry Potter clone). 'But if you go upstairs, leave your name on the waiting list and we'll contact you when the next shipment arrives.' Emma does this, since it's looking like it will be our best shot.

We leave crestfallen for a third time. Emma grumbles that Dymocks made such a massive under-estimation, when they promised the public on Facebook that they would be fully stocked all day.

Stage 4
We search the Rundle Mall K-Mart a few doors up, just in case, but they don't even have a book section.

Blake suggests that we pop our noses in at Target, since it's just across the road from the carpark. Although I expect to find nothing there, I agree we might as well, since we're already down here.

Stage 5
We take a few steps into Target and Emma calls out, 'Look, they have some!'
Sure enough, there's a very small pile near the check outs, and at this stage, we can't believe our eyes. They are $25 but worth every cent. We clutch one as if it's a golden egg and the staff members start laughing at us, because Emma is evidently so excited. We tell them, 'You don't know the run-around we had.'

On the drive back up to the Hills, we're all full of joy, talking about our proof that it's worthwhile to leave no stone unturned. And the kids say, 'Aren't you glad you listened to us, Mum?'

Stage 6
This is the stage which shouldn't have happened.
When we arrive home to Mount Barker, I decide I'll just dash into K-Mart for a few things. And would you believe it, THERE AT THE ENTRANCE IS A LITTLE PILE OF HARRY POTTER AND THE CURSED CHILD FOR JUST $15!!

Does our story have a moral? Maybe it has a couple. Don't go rushing off before you've checked close to home? The places with the most hype aren't necessarily the most reliable. And patience is commendable.

After our run-around, I'm hoping the actual Harry Potter story will be great.

UPDATE: I've now read it, and my review is here.
Posted by Paula Vince at 5:00 AM