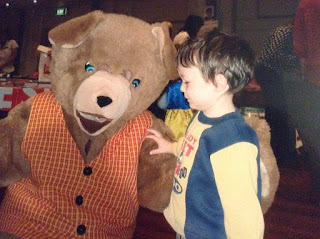 Three-year-old Blake loved the book bear at a conference where I had a stall.

I recently shared a post about writers living with kids.
During their growing years, I wrote and published nine novels. After discussing it over with them, I'm going to talk about the subject from their point of view.

Here's a sample of the events which might be taken as typical occurrences during their homeschooling years.

1) Their father would say, 'One of you come here and act through this fighting scene with me, to show Mum why it wouldn't work the way she's written it. Be careful not to knock anything off the shelf, though.'

2) Family outings could double up as research trips. I might say, 'Let me take a photo of that old cottage. It looks like a place in my novel.' Once we were hiking through a conservation park and discussing whether or not it would be a suitable spot to dump off a body (when I was writing 'Best Forgotten'). My husband said, 'I think it could be perfect. There are plenty of walkers on these paths, but nobody bothers to climb all the way up that steep cliff next to the main road, which is where you'd dump him in the long overgrowth. He could be there for years before anyone finds him.' And Logan suddenly thought to turn around, and said, 'Dad, there are people right behind us. You'd better keep your voice down. What might they think if they overheard this conversation?'

3) Sometimes the kids tried designing covers, and choosing who they thought might be the right people to resemble characters in my novels. We'd have chats about the quality of other writers' covers, taking in font, layout, colours and title. The same applied to analysing other author's plots.

4) They read through the novels or manuscripts of friends or acquaintances of mine. Once, I was helping judge some entries for an unpublished manuscript competition, and offered to get my teenage son to add his opinion to a very up-to-date YA novel set in the world of computer gamers. He came up with a few technical issues to run past the author. She made the changes he suggested, and was kind enough to thank him in her acknowledgements. 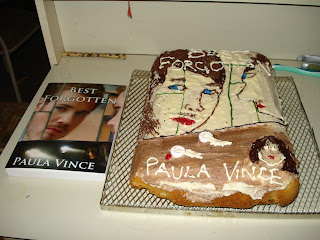 This was a cake my daughter baked and designed to match my 'Best Forgotten' book cover, for a launch. She was thirteen at the time.

I didn't twig that my kids' viewpoints might differ from others, until the day I sent Logan off to a one-day session at the library on creative writing for young teens. He came home shaking his head and said, 'I can't believe the hyped-up opinions everyone else around the table had about authors. They think they're really special or something!'

I told him, 'I thought so too, at your age.That's partly what inspired me to want to write novels in the first place. They do create worlds for others to get immersed in, and characters to love, from their own imaginations. That is pretty cool, isn't it?'

He just laughed and said, 'I don't think about them that way at all.'

That's when it hit me that he thinks differently because he's lived with somebody who has kept on writing for as long as he could remember.

And there was the time when Emma told us about a young acquaintance of hers who wrote a great spiel on social media about how she couldn't think of anything more inspiring and heroic than being a fiction author, sitting in coffee shops with your lap top, receiving fan mail and royalties in the post, changing lives with the words from your own pen. My daughter hummed and hawed, but decided to tell this friend, 'My parents are a writer and a musician, and I was the poorest of all my friends. When I was growing up I remember thinking that I wish they had other jobs because we could never afford things that my friends' families could.'

I've asked them, and on the whole, Logan, Emma and Blake are all unanimous about the following. When they've told anyone, 'My mother has written some novels,' they've come to expect responses like these.

'Wow, you're kidding, right? Has she really? That's fantastic!' (To which they would nod politely and think how they wished that 'Wow' would match their financial experiences)

Or, 'You must be really proud of her.' (To which they'd smile and agree because it was the polite thing to do.)

Or, 'Your mum must be really clever.' (To which they tell me they just grin and keep their mouths shut thinking, Little do you know!)