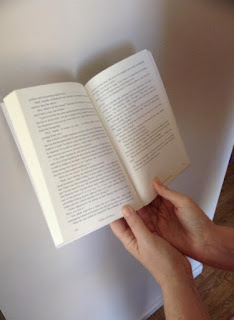 I've had encounters with the black dog at different stages of my life, which I'm sure many of us have. I've only come across one doctor who ever prescribed medication. I ended up not taking it, because when I sought the opinions of others, they thought she might have been a bit too quick. They suggested a good rest, plenty of fresh air and my favourite pastime, reading, first. It's worked for me. In return, I've often suggested reading a good book to friends or family members with depression, but it hasn't seemed to be the right thing to do. Here is the sort of response I've received.

'Sorry, I can't read books at the moment. My concentration is shot to pieces. I can't hold onto the thread of a plot.'

'I can't read until I'm feeling better. All my energy is focused on looking after myself.'

'I've got enough guilt and 'shoulds' on my mind already, so please don't add another one by suggesting that I read a book.'

It got me wondering whether recommending books to depressed people is a bit of a social faux pas which I'd violated. For my attacks of the blues, reading therapy is the one thing I can depend on to pull me out of it quickest. But maybe I'd never experienced such severe, crashing, clinical depression as they have, so I had to take their word for it. Then I came across a little book entitled, "Reasons to Stay Alive" by Matt Haig, who had been grappling serious depression for years, and came through the other side. He concurred with me. He believes his black dog had almost killed him, and books were his saviour.

Haig says that depression changed him from a person who simply liked books to a person who needed them. And his reasons turned out to be similar to mine.

He gave a builder analogy. Parts of his mind were broken, and the words of other people within the pages of books became his bricks and mortar, helping him to patch it back together again. Then he gave a potter analogy. He considered his mind to be a hopeless mass of mess and chaos, and the words and sentiments within books helped him to mold it back to the shape he wanted it to be.

Haig especially valued books by authors whose minds were clearly in a state of more peace, contentment and faith than he was experiencing. This is also what I've found most helpful about mood lifting books. What we find within their pages, whether fictional stories or gentle, non-fiction encouragement, is like medicine for our thoughts. In my own experience, depression almost always has some bad thought catalyst behind it. If I try hard enough, I can usually track one down. That's why the alternative ways of thinking presented within books has always done me good. It re-aligns my thoughts, getting to the origin of my depression and giving me an alternative way to think.

Some of my favourite fictional characters are those whose personalities help to restore what I might be lacking for the time being. If I'm feeling a bit jaded and glum, the cheerful enthusiasm of someone like Anne Shirley will rub off on me. Or maybe if I feel insulted or put down, re-reading the humorous way Lizzy Bennett reacted to Mr Darcy's mean comment will help. And if I need a boost to get back to some work I've been putting off, taking a break to read about the Hogwarts students buckling down to their Potions and Transfiguration homework may do the trick.

Similarly, Matt Haig imagined books to be like a treasure map, trying to direct him back to his true self, which he felt was buried somewhere beneath all the muck and mire of his depression. They were like clues along the way, and the more he read, the closer he felt he got. He imagined himself stuck in a sludge of quicksand, and books provided the leverage to pull himself out, because they were full of thoughts he wouldn't have been capable of coming up with on his own. They were like a rescuer's rope.

Some of the reading choices he mentioned took me off guard. They weren't the sorts of books I'd necessarily think of recommending to a depressed person, being quite heavy and tragic, but they seemed to work for him. Would you choose 'The Diary of Samuel Pepys' to help pull you out of a mental slump? Me either. But here's what Haig says. 'There was something about the way Pepys jollied on through the apocalyptic events of seventeenth century life that was very therapeutic to read about.' Okay, I guess I can understand that. It just goes to show that anything may help.

As for my own choices, just about anything I've recommended on this blog with four or five stars will fit the bill. Maybe even the ones to threes work too, once I've reviewed them, because the very action of finding words to explain my impressions is often enough to help me feel less depressed, regardless of a book's quality.

But to finish off with, here are some specific books written by people who have successfully fought their own way out of the murky trap of depression, giving their happier survival stories about where they've been.

1) Reasons to Stay Alive by Matt Haig. It seems only fair to start with the book I've drawn from so much for this blog post. He also mentions other things apart from reading which helped him through several years of deep depression.
2) You can't afford the luxury of a Negative Thought by Peter and John Roger McWilliams. These two brothers have put together a thick book combining quotes from all sorts of historical figures, laugh out loud humour, and sound wisdom to convince us to brighten up our minds.
3) Wobbly by Vikki Roubin. This book was written by an Aussie lady, and I found her personal story and tips for dealing with depression and panic attacks very helpful. It's great because I met Vikki at a writers' conference in Brisbane way back in 2007, and later when I contacted her to say how much I enjoyed her book, she replied that part of her impetus in buckling down to write a book was from attending a workshop I'd presented, in which I discussed just going for it.
4) Stepping out of Darkness by Lisa Limbrick. The author is another Australian friend of mine, who it's been a joy to meet in person. She draws from her own background of psychological knowledge to describe how actually owning her depression has been the first step in developing tools to deal with it.

So whatever else anybody may be doing or taking to combat depression, whether medication, therapy, counseling or long sabbaticals, I think books would have to help too, if you feel you could manage.
If you enjoyed this post, you might also like this related one about melancholia, the happy side of sadness.
Posted by Paula Vince at 5:00 AM