The Sad Scarcity of good Bromances 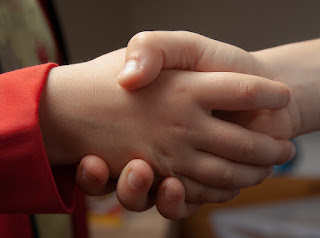 This blog post was prompted because of the popularity of the new release, 'Harry Potter and the Cursed Child.' A big focus in this play is the heartwarming friendship between the sons of two traditional enemies, Harry Potter's son Albus, and Draco Malfoy's son Scorpius.

Several fan groups across the internet believe that the boys' friendship is rich with gay subtext. They've expressed crushing disappointment that JKR and her fellow authors decided not to take Albus and Scorpius that way. A couple of crushes on females have been included for each of them, but several people call this a cop-out. Fan art and fiction to change this is no doubt being produced as we speak. This is just what I've noticed rife on the internet at the moment.

I can't help wondering if it highlights a bit of a problem in our culture. Why are so many people trying to read romance into Albus and Scorpius' friendship, just because of of its depth and sensitivity? Can't a pair of teenage boys enjoy a strong, affectionate friendship without being gay? Could it be because we see so few intense male friendships of this nature presented in literature and the media that so many people instantly assume what was never intended to be there? Even when I searched through images of friends for this blog post, I found an abundance of close girl friendships (hugging, arms around each other, foreheads together, smiling etc) but barely any for males. I'm thinking it must be high time to resurrect the 'bromance', which is defined as a close, non-sexual relationship between guys.

These thoughts prompted me to start searching through my mind for good examples of literary bromances. Although I came up with quite a few, I felt as if I was scraping the barrel. Some of them aren't quite perfect, and others are really, really old. But here they are.

1) Albus and Scorpius
It seems right to begin with the hot-off-the-press bromance that prompted this post. These two boys are a perfect friendship match on many different levels. First, they turn established patterns on their heads. A dark, resentful Potter hits it off with a sunny, optimistic Malfoy. Their fathers' history of mutual antagonism means nothing to them, because they take people on face value. They discuss sensitive, emotional issues with honesty and are both willing to admit that their life at Hogwarts would be unbearable without each other. When forced apart they are entirely miserable, and aren't afraid to acknowledge that they intend to always be there for each other.

This bromance even helps their families bridge their gap after more than twenty years. Imagine Harry and Draco having a polite discussion about mutual parenting challenges, and Draco offering Harry a piece of sound parenting advice which he decides to accept. This comes across realistically all because of their sons' bromance.

2) Harry and Ron
You can't start with Scorpius and Albus without mentioning the Hogwarts generation that came before. Although they were often part of a trio rather than a pair, Harry and Ron shared a close, best friend relationship. They had their ups and downs, but proved many times over that their manly affection for each other extended to death if necessary. A lovable duo.

3) R2D2 and C3PO
It's pretty sad when you have to rely on droids to provide a decent bromance. But these two are firm friends who travel together, look out for each other, translate for each other, understand each other and hate the thought of being separated.

4) Tom Sawyer and Huckleberry Finn
I admit I've never read these American classics. Being an Aussie, they weren't set on our school curriculum. But from reports I've heard all my life, I assume these two lads are inseparable friends on the same wavelength.

5) Frodo and Sam
I wasn't sure whether to include this one, wondering if their relationship is on quite the right footing to be considered a bromance. There is always a bit of servitude in Sam's attitude toward his beloved Master Frodo, but hey, I wanted to grab something.

6) Holmes and Watson
They are both intelligent, professional gentlemen who at least give lip service to a relationship of equality. Watson is always keen to tag along on Holmes' detective escapades to see what his friend will come up with next, and so he can say, 'You're incredible, Holmes!' And he never seems to find that smug, 'Elementary, my dear Watson,' at all condescending. Maybe not a perfect bromance either, but once again, I grab them where I find them.

7) Darcy and Bingley
These two seemed to be unlikely friends because of their different temperaments, but I guess they tick the bromance boxes. They enjoy hanging out with each other, they travel together and make sure to synchronise the plans in their calendars. And they've been friends for long enough that they make allowances for each others' foibles in a good-natured, eye rolling sort of way.

8) Hamlet and Horatio
The moody Prince of Denmark always had his best buddy to try to make things easier for him. Sadly Horatio's best efforts didn't make a whole lot of difference in the end, but at least he was always there for his friend, and Hamlet appreciated him.

9) Pip and Herbert
These two are getting closer to my bromance ideal, yet Charles Dickens lived long before the term was ever conceived. These young men became best friends and housemates with mutual concern for each other. They looked out for each others' interests, and were totally trustworthy and comfortable together. But do we really have to go back to Victorian England to find a good bromance? A bit sad if that's the case.

10) Michael and Jerome
I'm referring to one of my own published novels here, A Design of Gold. I worked really hard on this bromance between two young men who had nothing in common on the surface, yet felt thrown together in several different ways, until they realised they were more alike than either of them would have imagined. And it takes a life or death sort of situation for them to come to this point.

11) David and Jonathan
I think the ancient biblical bromance nails it, and sets the bar high for all future bromances. These two were devoted to each other to such an extent that David declared Jonathan's love superior to that of a woman, and we all know David was definitely a red-hot male who loved his women. Jonathan's actions proved that David's opinion was justified. He was the Crown Prince at the time of the friendship. Even though David's rising popularity jeopardised his own chances of someday becoming King of Israel, that didn't matter to Jonathan. He remained devoted to David and his cause all his life.


If you can think of any more good bromances, please let me know. It's high time boys were free to celebrate their BFFs, as girls do. My son has a number of fairly close male friendships, so they are out there in reality. We just need to see them reflected in stories and art. Please bring them back into our stories and folklore.

To read my review of 'The Cursed Child', click here.