'A Tapestry of Secrets' by Sarah Loudin Thomas 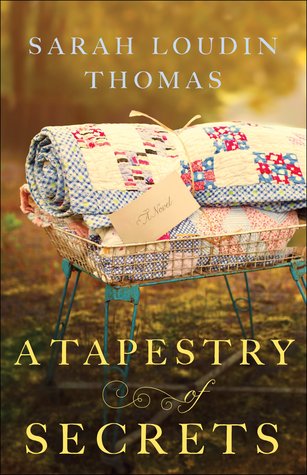 This Decade-Spanning Novel of Family and Faith Will Delight.
Now in her eighties, Perla Phillips has carried a secret since she was eighteen years old. When she sees her granddaughter, Ella, struggling for perfection, she decides to share her secret to show that God can use even the biggest mistakes for good. But before she can reveal what happened during that summer sixty years ago, she has a debilitating stroke.
Carrying a secret of her own, Ella arrives back in Wise, West Virginia, to help her aunt Sadie care for Perla. Both know the woman wanted to tell them something, but she's now locked in silence. Together they begin looking into the past, but they may learn more than they expected.
Will they have the courage to share their hearts? Or will the truth remain buried forever?

MY THOUGHTS:
This is the third and final in the Appalachian Blessings series. I've also reviewed Miracle in a Dry Season and Until the Harvest.

There is a wholesome, country feeling about the trilogy. I remember studying pastoral plays and poems as a student, and can't help thinking of these as pastoral novels. It's fun when a series following one family gradually changes from historical to contemporary. When we are introduced to new generations who hadn't even been born in the previous novels, it has a way of showing how time moves.

The heroine is Ella, the daughter of Henry and Margaret from the previous story. She is a fabric artist who returns home to help care for her beloved grandmother Perla, who has suffered a stroke. Ella is recovering from a break-up with her city boyfriend Mark, but finds herself growing interested in two local guys, Richard the new pastor, and neighbour Seth.

One of the main plot threads is a mystery which was touched on in the first book. Anyone who remembers Perla and her little daughter Sadie from Miracle in a Dry Season may also remember that Perla stayed tight lipped about the identity of Sadie's father, choosing to look toward the future rather than dwelling in the past. In this novel, she decides that Sadie deserves to learn the truth, just when her stroke renders her speechless. By this stage, Sadie is middle-aged and her relationship with her mother is a bit strained. Bits and pieces are gradually revealed through Perla's flashbacks, until we find out who he was.

There are other things going on in the community too. I kept asking why did Ella have to stay so determined in her opposition to the sale of the church property? The answer, of course, is that it's one of the other main plot threads, but her fixed attitude got a bit old. As readers, I'm sure most of us can see the other side, but Ella refused to listen, and she hadn't even been living in the town and attending the church in her most recent years. She was trying to force her own sentimentality on the poor congregation members who had to put up with the chilly drafts, dodgy plumbing and all the building's other problems that were mentioned. When you think about it, this made her no different from Mavis Sanders, who was presented as a trouble-maker who refused to consider the other side of the debate. Mavis was an elderly inflexible grouch, and Ella was a young inflexible grouch. Happily, it did come to a conclusion.

Overall, I found this a bit slower moving than its prequels and easier to put down, but I'm glad I've read the whole trilogy, and am up-to-date with the Phillips family.