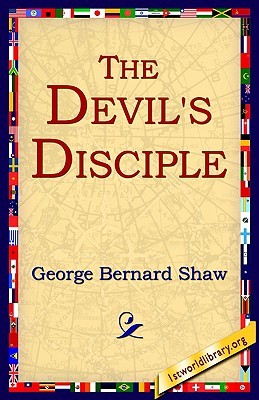 2015 Reading Challenge, Week 41 - A Play.
While I was searching, I vaguely remembered seeing this one on TV when I was a teenager. Finding it as a kindle freebie on Amazon clinched it.

At the most wretched hour between a black night and a wintry morning in the year 1777, Mrs. Dudgeon, of New Hampshire, is sitting up in the kitchen and general dwelling room of her farm house on the outskirts of the town of Websterbridge. She is not a prepossessing woman. No woman looks her best after sitting up all night; and Mrs. Dudgeon's face, even at its best, is grimly trenched by the channels into which the barren forms and observances of a dead Puritanism can pen a bitter temper and a fierce pride. She is an elderly matron who has worked hard and got nothing by it except dominion and detestation in her sordid home, and an unquestioned reputation for piety and respectability among her neighbors, to whom drink and debauchery are still so much more tempting than religion and rectitude, that they conceive goodness simply as self-denial. This conception is easily extended to others - denial, and finally generalized as covering anything disagreeable. So Mrs. Dudgeon, being exceedingly disagreeable, is held to be excee-dingly good. Short of flat felony, she enjoys complete license except for amiable weaknesses of any sort, and is consequently, without knowing it, the most licentious woman in the parish on the strength of never having broken the seventh commandment or missed a Sunday at the Presbyterian church.

MY THOUGHTS:
This is an American satire with tinges of dark humour set during the War of Independence. It takes place in 1777 at Westerbridge, a small frontier town.

The self-proclaimed devil's disciple is Richard Dudgeon, a young man who is regarded as not just the rotten egg of his family but the whole town. He's simply grown fed up with the mean spirits and hypocrisy he sees from several supposedly devout religious folk, and lives life on his own terms. He might have got along a little better if he didn't call himself that, but Richard is a bit of a stirrer.

Judith Anderson is the pretty, young wife of the old local minister. She fears and hates Richard because of his behaviour and reputation, but one day when British soldiers storm into her house to arrest her husband, the devil's disciple does something truly astounding. She has only a matter of moments to decide whether to re-think everything she's ever taken on board about him.

In many ways, this is really Judith's story. She's the only one with much character development, including Richard. His own epiphany obviously took place in the past before this story began, so he's basically the same man at the finish as he was at the start, except for a bit of a crisis concerning the display of his softer feelings. However, she has to turn upside down everything she ever knew, before it's too late.

Judith starts off in the first act parroting what the supposed moral guys are saying. Circumstances force her to respond to a genuine show of sacrifice and goodness from the least likely person. If I'd been an actress, I'd love to play her role. She genuinely detests a man one day, then tells him she'd go to the ends of the earth with him the next.

I'm sure lots of male actors would have wanted the role of 'Gentlemanly Johnny', the British general Burgoyne who's in charge of the court case in the second act. Based on a real person, he's a gruff dandy with a reputation for finding fault with everything, and delivers lots of memorable lines. These include, 'Martyrdom, sir, is what these people like. It is the only way in which a man can become famous without ability.'

It's a work of literature that needs to be read as a text to get most out of it, rather than just watched. We read things we wouldn't necessarily otherwise know, such as the history of General Burgoyne, who is 'gallant enough to have made a distinguished marriage by an elopement, witty enough to write successful comedies, aristocratically connected enough to have had opportunities of high military distinction.

Here's another example. When the devil's disciple inherits his father's property, leaving his mother out in the cold, we're told the courts will sustain the claim of a man-and that man the eldest son, against any woman if they can. Then in parentheses, it goes on to say, 'Remember at this time, Mary Wollstonecraft is as yet only a girl of 18, and her vindication of the rights of women is still 14 years off.'

It's interesting to read a play, after several years, reminding me how much I used to enjoy them. With novels, we're advised to show and not tell. Not so with plays, which have so many directions about the emotions and detailed facial expressions the characters are supposedly to showing.

Overall, it was a fun way of spending a couple of hours. As a bonus, it really brings to light different types of heroism and reminds us not to make snap judgments.