'On This Foundation' by Lynn Austin 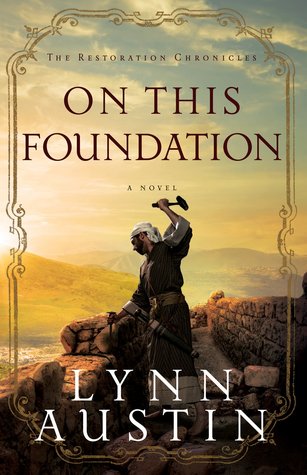 When news that the wall of Jerusalem is broken down, and its gates have been burned with fire, Nehemiah, Jewish cupbearer to King Artaxerxes in Persia, seeks God's guidance. After fasting and prayer, he's given leave to travel to Jerusalem and rebuild the city wall, not anticipating all the dangers that await him on his arrival.

The leaders of the surrounding nations become his fierce enemies, plotting to assassinate him and halt the work. A drought, meanwhile, has left the country impoverished, many families resorting to selling their children as bondservants just to keep from starving.

Capturing the rebuilding of the wall through the eyes of a number of characters, On This Foundation is a powerful exploration of faith in the midst of oppression, and hope that, in spite of appearances, the gracious hand of God is upon those who believe.

MY THOUGHTS:
If anyone deserves to be the hero of a book, it's Nehemiah. His courage and leadership skills are outstanding in the Bible, and this story starts before his days as the Persian king's cup bearer. I'm glad Lynn Austin began with a traumatic event from his childhood. It sets the scene for his close-knit relationship with his two younger brothers, not to mention why security is his calling and passion. It set me up to want to back Nehemiah all the way.

It's fun to read how the reasonably young governor hides his lack of confidence and relies on the hand of the Lord to see them all through. As a result, his enemies can't help respecting him, much as they despise the threat he presents. Yet Nehemiah is only human and still reacts the way the world does at times, such as when he notices Shallum's daughters working on the wall and ticks them off. What I love about him though, is that he's always willing to admit when his own point of view may be lacking. It takes a woman, Chana, to show him that harbouring internal rage, however righteous it seems, may not be pleasing to God.

Chana is recovering from the loss of the man she was going to marry, but I found it hard to like her new betrothed, Malkijah ben Recab. He had a way of breaking up families to be his bondservants, and not noticing what his sneaky, lecherous sons were doing practically beneath his nose. Through most of the book, I'd been hoping for a loophole to break their betrothal, but the plot holds a few surprises. Malkijah actually delivers one of my favourite lines. 'Don't waste time in useless worry, dear Chana, fretting over what might never happen. Worry doesn't change a single thing. Just live.'

Some of the best characters are among the servants. Nava is a pretty teenager forced to work in Malkijah's household to help repay her parents' loans. She learned what many people haven't grasped far older than sixteen, that circumstances don't always go a person's preferred way, in spite of prayer. Her friend Shimon, the old goat keeper, is a true hero.

I would have liked the addition of a scene from the enemy leaders' perspectives when they realise they haven't outsmarted Nehemiah, in spite of the lengths they went to to bring him down. After all, we sat through plenty of scheming from them when they thought their plans would prevail.

One of my favourite parts of the story is when Nehemiah ponders what should come next in his own life, when the wall building is finished. It's interesting for anyone who has finished a meaningful task we feel is our calling, but flounder when it comes to deciding what to follow it with. We've even coined a modern term for it, 'the next big thing.' Nehemiah's story makes us ask the question, is there always meant to be more glory to follow on from a big success? His enemies are crafty when they send bogus prophets to tempt him with dreams of future leaderships and admiration in Judea. And Nehemiah's eventual way of putting this to the test is a good, simple method any of us may use.

I can't end a review without a quote from the man himself. Nehemiah always recognised the symbolic meaning behind the broken walls, and told the people, 'Rebuilding this physical wall won't do us any good unless we also rebuild our lives with the Almighty One at the centre.'