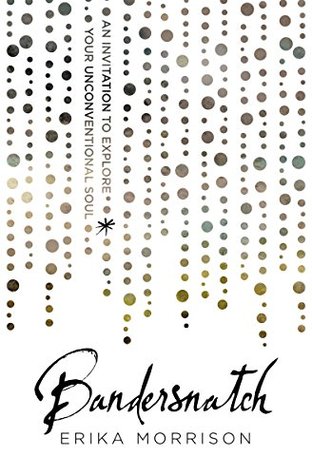 Contemporary Christianity seems to be suffering from an epidemic of sameness. Uniformity. Monotony. Those trapped inside are often afraid to step beyond established norms and express their creativity, and those on the outside often see little that attracts them. Yet God, out of the abundance of his own creative force, made each one of us unique. Peculiar. Irreplaceable. So why so much pressure to conform?

Bandersnatch* explores this intersection of disillusionment by inviting readers on a journey of liberation. It’sorganized around four creative terms viewed through the life of Jesus: Avant-Garde, Alchemy, Anthropology, and Art. Each expression reveals a diverse facet of God’s unorthodox creativity planted within us.

Providing a fresh look at God’s avant-garde nature and a new set of definitions by which to live, Erika Morrison gives us permission to break free from the expectations and labels that cramp our souls. Only in embracing our uniqueness can we create artful, holistic lives that matter to both heaven and earth.

*A bandersnatch, while more commonly known as the wild, ferocious, and mythical creature of Lewis Carroll’s creation, is also a person with unconventional habits and attitudes.


MY THOUGHTS:
I'm more familiar with the jaberwocky, but another mythical creature introduced by Lewis Carroll is the bandersnatch. It's a fairly wild creature with unconventional habits, and in this book we're invited to embrace our inner bandersnatches, figuring out who we are deep down rather than just going with society's flow and fitting in.

'Human made systems are taking up space where our identities should be blooming,' Erika Morrison declares. She urges us to examine every box we've ever accepted without question, looking at the beliefs, rules, formulas and assumptions that fuel them.

She discusses a system she calls 'crossing over' in which words, ideas and values which have been typecast by the world are given new, more fitting definitions. For example, the world may think the word 'blessed' equates to wealth and popularity, but when Jesus used it, he meant that a person had come to a point when they realise they really have nothing but him. She focuses on four 'A' words or terms in particular; Avant Garde, Alchemy, Anthropology and Art. I really like her take on 'alchemy.' The world would have us believe it means turning something of base value into something more showy and expensive, but to Morrison, real alchemy is simply noticing the treasures in what is generally passed by as unnoticeable. And to her, the word 'art' encompasses any of the 1000 ways a person might reveal themselves to the world.

She and her homeschooling family carry out these principles in a really hardcore way which I find extremely challenging. Certainly nobody could ever accuse Erika Morrison of not practicing what she preaches. The extreme lengths they take to clean up their city and show their love to others convince me I'd have to be a bandersnatch in a far more low key way. However, as I read, I can't help wondering whether the Morrisons are doing just what Jesus might do if he showed up in the twenty-first century. It's not a book that leaves me feeling completely comfortable, which might show that her intention is working. Then suddenly, the reader is off the hook, when she says that following her example to the letter is the last thing she'd want to tell us to do. A good combination of conviction and grace.

I'm sure I'll delve into it from time to time when I need a shake-up. I can't help wondering what might come next. Some of the passages are so beautiful, I've copied them down to ponder, but they're too long for the scope of this review. Even the author states that she's only half as weird as she longs to be, but her quotes all through make a paradoxical sort of sense.

Why would we want to define our 'thisness' by somebody else's 'thatness' indeed?