A Good Story Belongs to Everyone 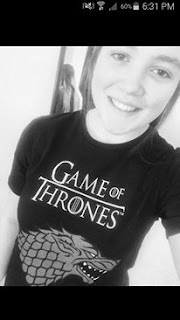 I was once congratulated at a party for sharing funny jokes and stories on Facebook. The person I was talking to praised my posts for being either food-for-thought or day-brighteners. I smiled and thanked him, although I honestly didn't think it was worthy of a compliment. All the creators and artists had done the hard work putting them together. My only input was clicking 'share'. I shrugged it off as the easiest praise I'd ever received. Only in retrospect did I begin to reflect that he was actually onto something. I started to see how sharing things and passing them on actually makes them ours.

It started dawning on me when I was directed to a blog where someone had reviewed one of my novels (Best Forgotten.) I read her lovely review and then clicked on the comments. A friend of the blogger had written something like, 'Thanks so much for the recommendation. I'm really getting into this book.' And then the girl who wrote the review replied in words to this effect. 'I'm so glad you're enjoying it. I couldn't help thinking it was tailor made for you all the way through. Glad to have been able to help your reading pile grow.'

That was it. It was pretty simple, but made my day. There I was, a total stranger, and these two ladies had adopted my story and made it their own. One of them was thanking the other for sharing her thoughts. And she was accepting the thanks, as if Best Forgotten was her own. And in a big way, it was. I like that a lot, and it's just as it should be.

Copyright laws exist to protect authors and creators from direct plagiarism, and rightly so. But at a deeper level, when a story is released into the world in the form of a book or screen play, it becomes common property. 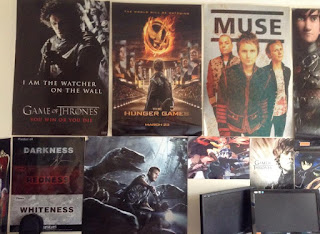 Somethings in our hearts responds to something that was in the heart of the author. That's why fan groups are formed around popular stories, where people discuss the plot and dress up like the characters. It's why my daughter has ordered so many T-shirts featuring her favourite stories. Emma is the perfect fan to have, because she walks around doing everyday things, but quietly claiming 'Game of Thrones', 'Hunger Games' and many others as her own, from the moment she rolls out of bed and gets dressed. What a great free advert for the writers. (The photo above is just a section of Emma's bedroom wall, which she's covered with different posters, so she virtually sleeps in a collage.)

I've seen the pay-off continue for her, in the form of ice-breakers. Just yesterday, we were in a seaside Goodwill store at Victor Harbor, and the lady behind the counter noticed Emma's Game of Thrones T-shirt and started engaging her in a long conversation about whether or not Jon Snow is really dead, and then they moved on to talking about other stories. Fan T-shirts seem to be a great way of connecting with other members of your own tribe.

It's great that the sum of good stories is like a potluck supper of the best type. Everyone brings something to the table, and it becomes one big, luscious, festive spread which anyone can share.

Anne Lamott said, 'When you love something like reading, or drawing, or music, or nature, it surrounds you with a sense of connection to something great.'

I like to think of many people contributing to the wealth of the story banquet by either adding their own plate to the table or partaking of what's there already with great relish and recommending each dish to others.
Posted by Paula Vince at 5:00 AM