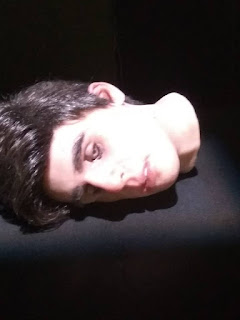 October is Halloween month, perfect for lists with a macabre twist. Headless characters fits the bill. For the sake of staying reasonably upbeat, I decided not to include historical figures, such as John the Baptist, Goliath and Anne Boleyn. I'm confining it to people whose headless state doesn't prevent them going about their normal business.

When I use the word 'headless' that also extends to 'bodyless' for there are two categories of people in this list. a) Walking torsos without their heads, and b) Dismembered heads without their torsos and limbs.

1) The Legend of Sleepy Hollow
It's an American classic. The little town is said to be haunted by the ghost of a horseman whose head had been blown off by a cannon during the Revolutionary War. He kept hold of it though, to make a formidable weapon. One dark night, school master Ichabod Crane is returning home from a party, when he's confronted by the ghost, which removes its head from the saddle in front of him, and hurls it straight into Ichabod's face. Poor Ichabod is never seen again. 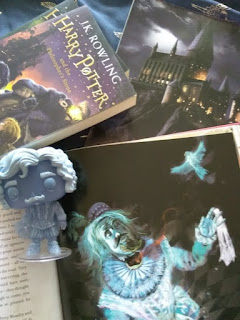 Sir Nicholas de Mimsy-Porpington is the good-natured Hogwarts ghost of Gryffindor House. His execution had been botched up, leaving his head still attached to his neck by a thin thread of sinew. This frustrates Nick no end when his application to join the Headless Hunt is denied by Sir Patrick Delaney-Podmore, who will only accept contenders whose heads have been completely severed. Nicholas' 'death day' happens to be October 31st, and he invites Harry, Ron and Hermione to a sombre sort of party to celebrate it.

3) Harry Potter
There's another accidental incident, when Harry's supposedly floating head is spotted at Hogsmeade by Draco Malfoy. It gives Draco a tremendous scare, since he doesn't realise Harry is wearing his invisibility cloak. Harry's head just happens to poke out at one point during a tussle with him, Crabbe and Goyle. Harry gets in trouble with Professor Snape, but the chance to freak out Malfoy and his Slytherin cronies is almost worth it. (See here for more about these sworn enemies.)

4) Library of Souls
In this third volume of Miss Peregrine's Peculiar Children, there's a row of severed heads on pikes guarding the bridge to the evil wights' headquarters. Although they appear very menacing and fierce, their limitations are clear when Jacob, Emma and Addison are brave enough to attempt to cross the bridge. The heads realise they're in no position to do anything but yell down empty threats. Nobody has ever put them to the test before. My review is here.

5) Engelbert
Talking about Ransom Riggs' quirky characters, this young man from Tales of the Peculiar has the ability to disattach his head from his neck and screw it on again whenever he pleases. He lived long ago in a band comprised of some of the very first Peculiars in history. Engelbert is so used to his special knack that he's pretty casual about it, and tends to forget that it frightens people. He has to do a lot of apologising. (See here for more about these quirky tales.) 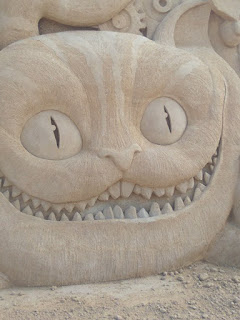 He's a very cool character from Wonderland who can fade away gradually until only his head remains, and eventually nothing more than his cheesy grin. He's a puzzle to the aggressive Queen of Hearts, who orders heads to be chopped off whenever she loses her cool. The executioners try to reason that since they can't see the body the cat's head is attached to, her demand to chop it off will be hard to carry out. (See here for my review)

7) The Young Ones
Here's a blast from the past for eighties kids who used to watch this program. Remember when punky Vyvyan had his head knocked off from a train window? His body goes blindly lumbering out to search for it along the track, and when he finally stumbles across it, it berates him for taking his time. That was just the sort of crazy scenario you could expect from The Young Ones. And fans kept tuning in for more. (Also see Famous Stories with Trains and Railways.)

8) Futurama
Spare for a thought for the preserved heads of famous celebrities and US Presidents in jars which belong in the Head Museum. Philip J Fry feeds them as part of his night job. On one occasion, he and the gang become drunk and accidentally ingest the heads' pickling fluid, which sends them back to the time periods in which the heads belonged. (For more about the antics on Futurama, see here.)

9) The Wizard of Oz
He was doing it with smoke and mirrors, but one form the great ruler of the land of Oz liked to assume for direct interviews with Dorothy and her friends was a great head, just looming there in front of them. No doubt he thought it would make a huge impact. And he was surely correct. (See my review.)

10) The Enchanted Head
This one is the hero of an unusual romance found in Andrew Lang's Brown Fairy Book. A beautiful sultan's daughter falls in love with a head on a platter, but he's a very handsome head with all his wits about him, and he can jump, roll and dance like a pro. They are both very happy together, especially when he reveals to his bride that each night, he's allowed to get his body back. It's their special secret. 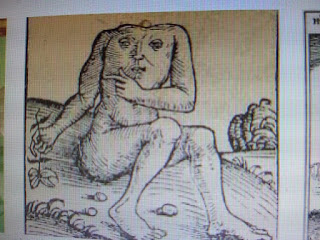 11) The Blemmyes
These tribal people kept popping up in legends over the centuries. They were (or are) a strange race of headless folk with eyes in their shoulders and mouths in their chest, also known as the Ewaipanoma. Some pretty illustrious people, such as Sir Walter Raleigh, were certain they existed, and a chieftain's son during the Elizabethan era claimed to have been captured by the Blemmyes and managed to escape. Apparently their lack of heads made no difference to their amazing skill with bows and clubs.

12) William Laud
He was a rather harsh Archbishop of Canterbury from the mid 1600s, who made dangerous enemies of prominent Puritans. Laud was eventually beheaded for treason, but is rumoured to haunt the library of St John's College at Oxford to this day. He supposedly appears with a candle in his hand, kicking his own head along the floor. If I happened to be a student and heard a bowling ball sound, I wouldn't hang around to investigate! In fact, I think I'd pack up my books long before dark.

Please let us know if you're fond of any of these headless folk, or their tales. And of course, tell us if there any others I've missed which might be added to the list.
Posted by Paula Vince at 5:00 AM