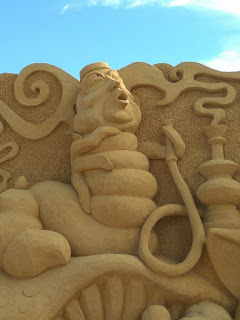 Over the Easter holidays, we went to visit these very cool sand sculptures at Port Noarlunga foreshore, based on the story of Alice in Wonderland. Since I had a re-read of the book just recently, I thought I'd write a sort of review, illustrated by some of the photos I took. I call it a 'sort of' review, because Alice in Wonderland is quite a tricky book to pin down and have some sort of definite opinion of. But I'll have a try.

We all know the premise. Alice nods off to sleep while her sister reads a tedious book, then in her dreams, she follows an uptight little rabbit, who lands her in a weird and wonderful world where she has no idea what's going to happen next. 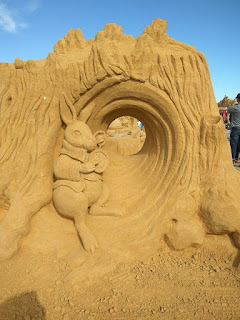 If you google the book, you'll find many theories about deep and symbolic meanings, ranging from drug use and sexual hang-ups through to loss of identity and coping with adolescence. I baulked at the thought of trying to match any of those with ideas of my own, because I didn't have any. So much of the story just seems to be a load of far-fetched waffle. At times I didn't blame those who wondered what substance Lewis Carroll might have been on while he wrote it. Yet jumping to that conclusion doesn't sit easy with me either, because lots of the characters' dialogue is sharp as a knife, indicating that he had his wits about him, which leads you to wonder whether he did, indeed, have some moral in mind. 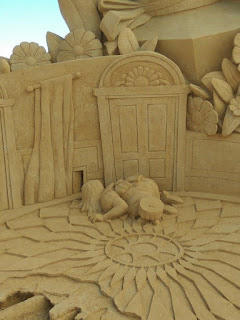 I actually rather like some of the theories I read about childhood thought. For example, the beautiful garden Alice first spies through the tiny door may symbolise her expectation of what she thinks the world of adults will be like, a sort of ideal paradise which seems to promise beauty and order. Her main problem is that she can't get into it for so long, because circumstances make her the wrong size for the door at the right moment.

But when she finally does manage, Alice finds that garden is not all it's cracked up to be. For a start, there are gardeners busily painting white roses red, trying to avoid the wrath of an unhinged queen. Isn't the world of adults full of similar illusions, which we learn when we finally get there? (I can think of one.The magic slot in the wall of the bank appears to shoot out money whenever adults need it. But when we grow up, we quickly discover that it's limited, not to mention we have to put money in to draw from in the first place.) I remember wondering in my own childhood why grown-ups never seemed to be having as much fun as I anticipated when I got there. Well, we have to get there to find out, of course.

Surely whether or not we love or hate this story, we can recognise ourselves and some of our attitudes in the characters. I've had moments of being like the mock turtle, with his large, brimming eyes. When Alice asks what's upsetting him, the gryphon replies, 'It's all his fancy. He hasn't got no sorrow, you know.' I get him. Sometimes life is all a bit much, and we can't pinpoint why. 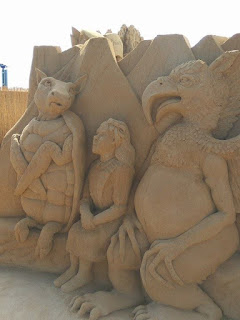 Perhaps our favourite characters may give clues to some of the attributes we feel deep down we should work on. To me, the most attractive character is the Cheshire Cat, who just grins on the outskirts of the action, declining to get involved. He's removed himself enough from all the bluster to figure out a bit of a secret. 'We're all mad here.' Only when you acknowledge that can you escape the feeling of chaos which overwhelms others at any time. Readers, represented by Alice, desire everything to make perfect sense. Maybe part of growing up is acknowledging that some things just don't make a lot of sense and never will. There's no point in trying to figure them out, because they elude explanation.

Do you think it's possible to simply enjoy our glimpse of the mad tea party without trying to theorise about it? Like most of us, Alice eventually gets tired of what seems to be pointless talk and storms off, but is it all as silly as it seems?

Hatter: Have some more tea.
Alice: I've had nothing yet, so I can't take more.
Hatter: You mean you can't take less. It's very easy to take more than nothing.
(Yet they call that guy raving mad, and we're supposed to be the sane ones.) 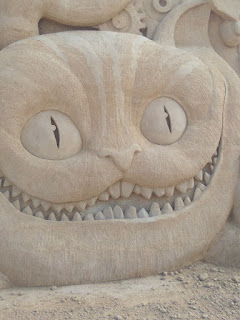 Is it possible that trying to force morals out of this crazy yarn makes us even more mad than the characters in it? It's not hard to imagine Lewis Carroll standing back like the Cheshire Cat, having a laugh at all the psychologists, professors, literary critics, students, reviewers and bloggers who have tried to wrap their heads around his story over the years. In his eyes, we might even be like the crazy duchess who tries to force a moral out of everything, because she just can't help it. 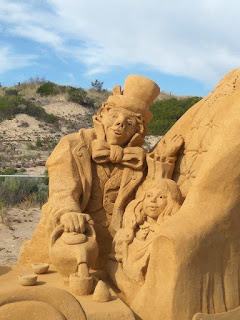 Duchess: Flamingoes and mustard both bite. And the moral of that is... birds of a feather flock together.
Alice: But mustard isn't a bird.
(Could Carroll's moral simply be that not everything has a moral?)

I expected this to be quite a difficult review to write, especially on the tail of what other, more learned people have had to say throughout the years. But maybe it's the easiest one ever.

Alice: I don't believe there's an atom of meaning in it.
King of Hearts: If there's no meaning, then that saves us a world of trouble, as we needn't try to find any.

Okay, do you think that might be a good spot to finish, then? One guy claimed, 'Few people are willing to treat this just like a piece of joyful nonsense.' Then maybe I'll take up the challenge and agree that's exactly what this is, and Lewis Carroll might have been proud, and said, 'Yes, you've got it!'
Posted by Paula Vince at 8:57 AM