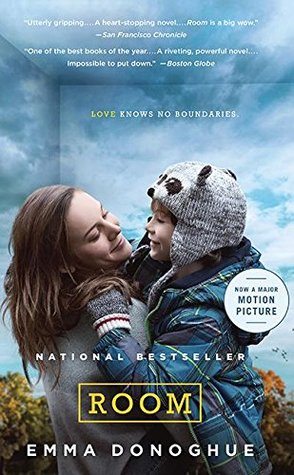 I stumbled upon this book meme, hosted by Books are my Favourite and Best  and had to have a try. It turned out to be such a lot of fun, I wish I'd done some of the earlier ones too. But at least I can participate in future ones for sure. The official instructions are here.
But here's a bit of background info from the blog. The meme was inspired by Hungarian writer and poet Frigyes Karinthy. In his 1929 short story, Chains, Karinthy coined the phrase ‘six degrees of separation’. The phrase was popularised by a 1990 play written by John Guare, which was later made into a film starring Stockard Channing. Since then, the idea that everyone in the world is separated from everyone else by just six links has been explored in many ways, from ‘six degrees of Kevin Bacon‘ to the science of connections. And now it’s a meme for readers.


Today's starter is Room by Emma Donoghue, so we start with that one, and it's blurb.
To five-year-old-Jack, Room is the world.

It’s where he was born. It’s where he and Ma eat and sleep and play and learn. There are endless wonders that let loose Jack’s imagination-the snake under Bed that he constructs out of eggshells; the coziness of Wardrobe beneath Ma’s clothes, where she tucks him in safely at night, in case Old Nick comes.

Room is home to Jack, but to Ma, it’s the prison where she’s been held since she was nineteen-for seven long years. Through her fierce love for her son, she has created a life for him in that eleven-by-eleven-foot space. But Jack’s curiosity is building alongside her own desperation, and she knows that Room cannot contain either indefinitely . . .

Told in the inventive, funny, and poignant voice of Jack, Room is a celebration of resilience-and a powerful story of a mother and son whose love lets them survive the impossible.

Now for my 6 degrees of separation.

1) The Yellow Room by Jess Vallance

It's a chilling Australian domestic drama about Anna, a teenager who finds herself drawn to become friends with her father's ex-girlfriend, Edie. There is more to Edie than meets the eye, and her mental judgment snaps for a short period of time, in which she decides that keeping Anna prisoner in a tiny room, with all her favourite things, is the best course of action for both of them. My review is here.

2) The Yellow Envelope by Kim Dinan
Both have the word 'yellow' in their title. In this travel memoir, Kim and her husband Brian embark on a journey to travel around the world. They take with them a yellow envelope from a friend, full of money to distribute randomly to deserving people along the way, as they feel led. My review is here.

3) Around the World in Eighty Days by Jules Verne
In this classic Victorian novel by Jules Verne, Phileas Fogg and his loyal man servant, Passepartout, do a similar thing to Kim Dinan, and embark on a trip around the world, and they also distribute their fair share of money along the way, although their motivation is different. However, they too experience their fair share of adventures and misadventures. My review is here.

4) Water for Elephants by Sara Gruen
At one stage, Fogg and Co. are forced to hire Kiouni, a female elephant, to help them traverse a certain length of their journey in India. They manage to make quite good friends with her. In this book, Jacob Jankowski forges a special bond with Rosie, another female elephant, when he's given the position of her trainer in a ramshackle circus during the Depression Era.

5) The Night Circus by Erin Morgenstern
This is another story in which the main protagonists discover that life in a travelling sideshow is not all its cracked up to be. The magical circus operates from sunset to sunrise, delighting the audience, A pair of rival magicians groom their young proteges, Celia and Marcus, up for an intense competition. Little do they know the young pair will fall in love.

6) The Hunger Games
Catniss and Peeta are another young pair who are also forced to be bitter rivals in a cutthroat competition, and also happen to fall in love.