'Franny and Zooey' by J.D. Salinger 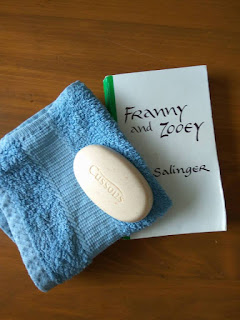 The short story, Franny, takes place in an unnamed college town and tells the tale of an undergraduate who is becoming disenchanted with the selfishness and inauthenticity she perceives all around her.The novella, Zooey, is named for Zooey Glass, the second-youngest member of the Glass family. As his younger sister, Franny, suffers a spiritual and existential breakdown in her parents' Manhattan living room -- leaving Bessie, her mother, deeply concerned -- Zooey comes to her aid, offering what he thinks is brotherly love, understanding, and words of sage advice.
MY THOUGHTS:

I chose this book for my 2017 Back to the Classics challenge, for the category of a classic set in a place you'd like to visit. Franny and Zooey is set around New York, which I'd love to visit just once.

This classic is pretty well plot free. It's comprised of three conversations. Franny is at a restaurant with her boyfriend, Lane, trying to explain her disillusionment with their ego-driven society, which he doesn't understand. In the next scene, Zooey is having a bath when his mother Bessie bursts in, and tries to convince him to have a word with his troubled sister. Such a lot of the book takes place from behind the bath curtain, I'd recommend this as a tub read. Finally, he gets out, dries himself off and talks to Franny, where she lies on a couch in the living room. Couldn't get more basic, but the interesting nature of the dialogue kept me reading on.

Franny is a 20-year-old college student with an issue that's easy to understand. 'I'm sick of everyone's ego. Everyone wants to get somewhere, distinguish themselves and be interesting. Just because I'm so horribly conditioned to accept everybody else's values, and just because I like applause and people to rave about me doesn't make it right... I'm sick of not having the courage to be an absolute nobody. I'm sick of myself and everybody that wants to make some kind of a splash.' She's attempting to resolve her crisis by reciting the Jesus Prayer (Lord Jesus Christ, have mercy on me), which she's read about in a book entitled 'The Way of a Pilgrim.' But her mental turmoil continues, and I found myself looking forward to whatever pearls of wisdom her 25-year-old brother might drop to help her out (and us, by extension).

There were hurdles to get over on the way to finding out. First, Salinger way overdoes the italics! Man, oh man! They just get in the way and become so annoying, It got to the point I couldn't stand the sight of them. Salinger is not only dictating how he thinks the reader should hear the characters' voices, but he makes them sound like duffers in the process, because nobody really adds that much emphasis so consistently. Do you think I'm exaggerating? Just read the book.

He also overdoes all the smoking. The year was 1955, and I know health risks weren't so well known then, but this family could still keep a tobacco company in business all by themselves. Ash trays are everywhere, including the bathroom. What a stale odour their house must have, and I felt as if I was passive smoking through the pages by the time I'd finished.

Thirdly, this is just a funny thing that occurred to me, but I couldn't help wondering if Salinger considered himself smarter than the average bear. He's writing about the Glass family, who were all considered super-intelligent from the time they were infant prodigies, and obviously felt he had enough genius to pull it off. Indeed, Zooey does come across as a very astute young man, well worth heeding. After asking Franny to seriously consider her motivation for reciting the Jesus prayer, he makes some pointed observations, and here are some of my favourites. a) 'If you're going to do it, at least pray to Jesus as he was, and not as you'd like him to be' (which he says is probably a combination of Jesus, St. Francis of Assisi, their older brother Seymour, and Heidi's grandfather).

b) 'Who else but Jesus in the New Testament really knew which end was up? He knew we're carrying the kingdom of God around with us inside, where we're all too goddamn stupid and sentimental and unimaginative to look.'

c) 'If it's the religious life you want, you ought to know right now that you're missing out on every single goddamn religious action that's going on around this house. You don't even have sense enough to drink when somebody brings you a cup of consecrated chicken soup... How in hell are you going to recognise a legitimate holy man when you see one, if you don't even know a cup of consecrated chicken soup when it's right in front of your nose?'

d) He reminds her how Seymour used to tell them to shine their shoes for the Fat Lady, whose identity used to be unclear in their young minds. 'There isn't anyone out there who isn't Seymour's Fat Lady.'

Overall, it left quite a positive impression. There's nobody quite like a brother for giving tough love. He knows her well enough to pinpoint the ways her mind was truly veering, perhaps better than she knew herself. And when it comes down to it, who else but a brother could be so blunt without her disowning him? As far as the ego question is concerned, he challenges her to focus on the good and sacred aspects of life, which are out there everywhere, and leave God to figure out what is or isn't ego driven. The pair of them remind me a bit of my two eldest kids, who have a similar age gap. It's a bit strange and short, with the feeling of a couple of random events pulled out of nowhere, and the descriptions come across like stage directions, but it's definitely engaging enough to finish.

If you're interested in pursuing the train of thought, some of Zooey's observations remind me of this book here, which was published recently.