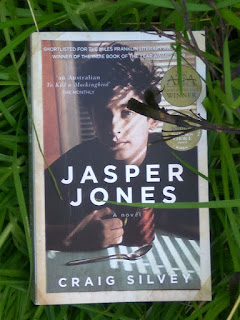 Late on a hot summer night in 1965, Charlie Bucktin, a precocious and bookish boy of thirteen, is startled by an urgent knock on the window of his sleep-out. His visitor is Jasper Jones, an outcast in the regional mining town of Corrigan.Rebellious, mixed-race and solitary, Jasper is a distant figure of danger and intrigue for Charlie. So when Jasper begs for his help, Charlie eagerly steals into the night by his side, terribly afraid but desperate to impress. Jasper takes him to his secret glade in the bush, and it's here that Charlie bears witness to Jasper's horrible discovery.

MY THOUGHTS:
This is very much an Australian coming of age story focused on the secret life of boys. Charlie is woken up one night by Jasper, who has something important to show him. A fellow student, Laura Wishart is hanging dead from a tree in Jasper's secret glade. They are sure that if they go straight to the police, Jasper will be an instant suspect, as most people disapprove of him without even knowing him. They decide to hide her at the bottom of the billabong until they solve the crime for themselves. Jasper thinks the town recluse Jack Lionel was the murderer, and sets out to discover proof.

It's a shocking premise, and the way the story pans out would make a debater's dream, with black and white issues crossing over to several shades of grey. At the top of the list is the question of whether the two boys did the right thing. On the surface, Jasper may appear to be validating what the judgmental adults think of him, yet he's wise enough to see through their illusions of goodness and fairness, to predict that they'd never give him a chance.

Courage is a major theme, as is the tendency of people to tell white lies to enhance their image, so you don't know whether what you see is real or put on for show. I can see why it's compared with To Kill a Mockingbird, as several cowardly racists operate in a similar spirit to those in that book. Charlie even compares his peace loving father to Atticus Finch, thinking he has the smarts to be a lawyer, 'except then he'd have to stand for something.' We want to see what it will take, if anything, to make Dad take a stand. The fact that there's such a fine line between lack of courage and the wisdom to predict that your best efforts won't be of any use was interesting.

The central figure and narrator is Charlie, and his love for the written word helps make the fabric of his own identity. When bullies pick on him for his use of big words, he responds by collecting even more, as his way of punching back against them. It turns out this side of his personality drew Jasper to seek him for support in the first place. 'I hoped you might see things from my end. That's what you do, right? When you're reading. You're seeing what it's like for other people.'

Words don't even mean all they seem to on the surface. Charlie and his best friend, Jeffrey Lu, share funny mutual insults, which are really screens for the fact that their friendship is the most valuable thing for both of them. Even though Jeffrey is never privy to the main plot point, he's one of the book's heroes. Always being knocked down and scrambling up again, the question of whether or not his cheerful optimism will ever waver drives us to read on.

There are several repeated motifs. Charlie often seems to be taking off his glasses to give them a wipe, to the point where I guessed it's probably meant to reinforce his vulnerability and bookish nature, just like his fear of insects. I started wondering why his glasses turn out to be such an indication of his character, since anyone could have his eye problems, including the mean thugs. Presumably, Charlie's love of reading made the problem easier to pick up. It might not come to light as quickly in those who shy away from reading.

I felt sometimes we were being prodded to share Charlie's opinions about everyone, and I did most of the time, but not always. Especially since he was willing to excuse one action (or non-action rather) of Jasper's, which I think did lead to a tragedy that should never have happened. Just because Charlie thought it was OK, I get the feeling the reader is supposed to nod along, and this reader didn't.

I'm not surprised to see that some younger reviewers have had to study this at school. Books with ambiguous, unanswerable questions with the potential to cause unending arguments are just the sort that often make it onto educational curricula. I think it should be read just to enjoy the tricky nature of some of Charlie and Jeffrey's conversations, such as the motives of the person who first discovered milk from a cow, or why the 26 letters of the alphabet are arranged the way they are, and who made the decision. It's set in the mid sixties, and the boys were having watermelon pip spitting competitions. Since they're all seedless these days, we've lost an iconic Aussie childhood ritual there.

I'll finish with a quote from the book which sums up the Australian summer heat. 'Either the earth is being devoured by the sun, or it is hurtling towards us like an enormous meteor.' But Charlie and his friends braved it anyway, because in their days, they didn't have the range of digital media options keeping them indoors as modern teens.

Overall, a potential Aussie classic that's well worth a read.

4 stars (Had to take a star off for some plot points that disappointed me)
Posted by Paula Vince at 8:08 AM