'Sun on the Stubble' by Colin Thiele 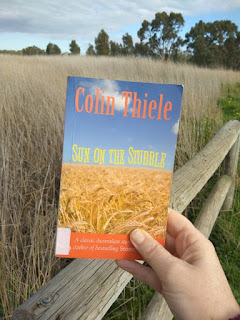 Bruno Gunther lives on a farm in South Australia, where adventures spring up like wheat shoots.He has to cope with his stern Dad, his Mother and family - and trickiest of all is the new teacher in town, who is too alert for comfort. Then there are the local arguments, that all seem to flare up around complicated bits of machinery, like water pumps and cars.All they really need is a little help from Bruno to sort everything out...

MY THOUGHTS:
This is my pick for the Classic From a Place you've Lived category of the 2019 Back to the Classics Challenge. It was challenging indeed, as there really aren't many choices. I've only ever lived in South Australia, which is a beautiful corner of the world, but hasn't an abundance of well known stories associated with it. I fell back on the great Colin Thiele, whose kids' and Y.A. novels have pleased generations of readers.

I chose this novel because of nostalgia. My Year 7 teacher, Mr Schwidder, read it to the class, and we used to all almost roll around on the floor laughing. With a German heritage himself, he would put on comic accents to suit the characters, especially 'Dad.' They were descendants of nineteenth century Germans who fled their homeland to escape religious persecution and have a fresh start in the new colony of South Australia. Several of my ancestors shared the same background, so the story was meaningful even back then.

Also, my older brother highly recommended it at the time, and he was no reader. He claimed it was the only novel that ever held his attention through to the finish, (and I'd be willing to bet that's still the case). That held great weight with me as a twelve-year-old.

So the story was published in 1961, but set in the 1930's or 40's. Bruno Gunther is the youngest son; a twelve-year-old who lives with his hard-working family on a farm in a fictional place called 'Nagapalee' which could be any small South Aussie bush town. Each chapter focuses on an episode around work, school, sport and social times. It starts off when Bruno brings a possum into the house to show off, and his prowess backfires on him when it panics and trashes the kitchen. But later, he's instrumental in helping catch a couple of dangerous crooks who have been stealing sheep and wood. There was no electricity in their house, although some city relatives had it. Bruno and his brother Victor shared a bedroom, and loved listening to their primitive old wireless with headphones. Adelaide is the nearest big city, and at the end, poor Bruno is on his way to attend boarding school there.

In some ways, its structure reminds me of an Aussie version of another classic I re-read not so long ago; Laura Ingalls Wilder's Farmer Boy. There are some huge differences though, the main one being the characterisation of the two respective fathers. Almanzo's father, James Wilder, is one of those super-dads whose every word is taken by his respectful kids as an oracle. He was depicted as the true head of the family. But here we have Marcus Gunther, who is more of a Basil Fawlty clone, fiery, overbearing and totally reactive. The undignified and embarrassing things that happen to him is one of the book's biggest sources of mirth and delight. It would seem good old Tall Poppy syndrome has been a big feature of rural Australia for a long time.

Bruno himself is a very likable young hero, who loves to spend his spare time climbing trees after birds nests, hawk's nests and possum hollows. He also traps rabbits for a bit of pocket money. Well, my sons enjoyed similar quests at his age, but theirs were virtual reality, done in front of computer screens in their bedrooms. I know that's sort of sad, but there's no stopping progress, and each era has its own positive characteristics. I've no doubt Bruno and his brothers would have been sucked right into the online era, had they lived in the 21st century. Back then, it was surely, 'Come inside and do some work,' while now it's more like, 'Go outside and get some fresh air.' As a modern parent, I can't deny it, although I'd hate to come across as one of those pests who enjoy paying the younger generation out, because I'm really not that person. (Besides, they're referred to as 'Boomers', and I'm too young. I'm Gen X, thanks very much.) I can relate a bit to Emma Gunther, the mother in this novel, with her big heart and fearful imagination, always latching on to worst case scenarios. So one thing that never changes is the heart of a mother.

It was nice to return to this story for the first time since my tweenie years, because it reminded me how times have changed, and helped reacquaint me with the upper Primary kid that used to be me.

(Now that I'm on the topic of my deep South Aussie roots, you might enjoy this reflection featuring the beautiful place, called Let's Bloom where we're Planted.)