'The Prince and the Pauper' by Mark Twain 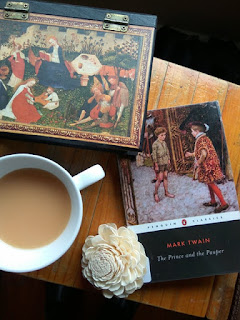 This treasured historical satire, played out in two very different socioeconomic worlds of 16th-century England, centers around the lives of two boys born in London on the same day: Edward, Prince of Wales and Tom Canty, a street beggar. During a chance encounter, the two realize they are identical and, as a lark, decide to exchange clothes and roles--a situation that briefly, but drastically, alters the lives of both youngsters. The Prince, dressed in rags, wanders about the city's boisterous neighborhoods among the lower classes and endures a series of hardships; meanwhile, poor Tom, now living with the royals, is constantly filled with the dread of being discovered for who and what he really is.

MY THOUGHTS:
Two babies are born on the same day in Medieval London. One isn't wanted at all, since he's an extra mouth to feed. The other is longed for with bated breath by the whole country. The first is a little beggar named Tom Canty who lives in a slum on Offal Lane. The second is Edward Tudor, son of Henry VIII. And not only do the two boys share the same birthday, but grow up to be doppelgangers.

Mark Twain has written a cute regal fan fiction, in which two ten-year-olds meet unexpectedly and decide to switch places for a short time. They each want a quick taste of how the other side lives, since neither are happy with the restrictions they are forced to endure. So they swap clothes and go off on their merry ways, but the stunt backfires badly on both of them.

It comes as a total shock when they want to stop playing, but nobody will believe them and take them home. It reminds me of long ago days when I used to pretend to be somebody else, but my parents never bought it either. In the case of these boys, those closest to them assume they've gone bonkers, when they keep being so earnest. Sudden madness is a far-fetched affliction that doesn't happen often, right? But it turns out to be far more credible than a pact with a person at the other end of the social pecking order. So both boys seem to be stuck in a new lifestyle neither of them really want, and it looks like it's going to be permanent. Ooops!

Then King Henry dies, while the new little king is out copping abuse from the rough end of his kingdom, and still nobody twigs. All the while some little gutter snipe is getting prepared for his coronation.

The plot switches back and forth between them, focusing slightly more on Edward's adventures out in the great wide world, than Tom's experience in the Castle. Tom strikes me as the wiser of the pair. He figures out pretty quickly that he'd better learn to impersonate the prince if he wants an easy time. But Edward keeps getting clobbered because he won't stop insisting that he's the king of England, and expects to be treated accordingly by thugs, thieves and desperadoes. There's a very fine, almost transparent line, between bold honesty and a serious lack of judgement. Come on mate, it should be clear that nobody is going to buy the truth, so you'd better pretend to be Tom, at least for a time!

The guy I consider the hero of the whole tale is neither of the little whipper-snappers, but Miles Hendon, a down-on-his-luck young noble man who's been totally screwed over by his own family. He stumbles across young Edward, pities him and decides to become the poor little waif's self-appointed elder brother. It's the best thing that could happen, and saves Edward's life on several occasions. Miles is ultra-sympathetic, super-cheerful, patient and smart to boot. He's always saving the day, but sheepishly and comically enough not to come across as one of those Mr Perfects. (Which maybe does make him perfect.) Curiosity about how his personal predicament will work itself out saves the book from the straight predictability of the two boys. What a legend he is.

I like to read a few other reviews after forming the gist of mine. This little novel has loads of people complaining about the difficult dialogue, since Mark Twain wrote it to match the speech patterns of the time it was set. Nobody said this directly, but in effect, these reviewers are demanding, 'Please dumb it down for us.' Come on, fellow readers, let's man up! It's honestly not that hard. Twain hasn't used Tudor English to the letter, or it would be incomprehensible. Just enough to give his story a beautiful touch of authenticity. If we're willing to enter into the spirit of the Middle Ages, let's do it as wholeheartedly as they would, and stop demanding to be coddled with contemporary English. If we read it aloud with our kids, it's the perfect opportunity to show them that the English language is a rich, evolving entity, and not static and stale. For example, I wish 'mooncalf' was an insult that lasted the distance to the twenty-first century. It's such a descriptive word.

So it's a simple story, but with a fairly provocative theme of how allegiance can be given based on a person's pedigree rather than his good character. Even though we live in more of a meritocracy now (which has its own problems) there's still plenty of name dropping and social climbing in our era. Word-of-mouth commendations based on who we know still give people extra boosts and lucky breaks that others inevitably miss. Yet after a few hiccups, Tom ended up pulling off Edward's role flawlessly enough to be widely believed. Maybe it's Twain's reminder that even nobodies may really step up if we're given the opportunity.

Even though I expected a little fairy-tale about the grass being greener on the other side of the fence, there's a bit more to it, and it's quite a cool little read.