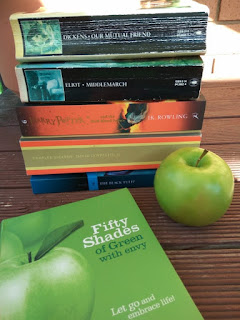 What do we do with jealousy? It's one of those emotions we never intentionally cultivate, but surges up from seemingly nowhere. Parents express shock when we detect it for the first time in our darling children, yet reflection might tell us we shouldn't be surprised, for we had it in spades too.

There is actually a fine line of distinction between envy and jealousy. Envy occurs when we covet what belongs to others, while jealousy amounts to fear that what we possess will be taken away by them. I won't press the distinction too hard in this list. It's all about keeping  a close watch on what others have compared to us, no matter what form it takes.

We ostensibly embrace this emotion, yet it's absolutely no fun. It's a torturous guide that robs our happiness, yet we struggle to figure out how to deal with it. We are never really taught coping skills, because few examples step forward to offer any. It's one of those tacitly unacceptable emotions we prefer never to acknowledge. The world could be full of secret jealousy eating the general public's peace of mind like corrosive acid, but it's the rare soul who'll admit it. So here I raise my hand to having experienced my fair share over the years. How about you?

This list may be a help. I wouldn't suggest it offers a cure, since I don't believe there is one, short of rooting it out like a weed. This is more of a balm to soothe the savage beast, and help it lie dormant. There's nothing like knowing we are in famous company to help quench the flame.

Keep in mind that owing to nature of these lists, there are a few plot spoilers.

I'll start with some Biblical examples to set the tone.

1) Cain
Adam and Eve's first son hated it that his younger brother got God's thumbs up for offering an acceptable sacrifice, while the motivation behind his own was frowned upon. Cain was a man of instinct. Instead of deciding to try better next time, or even talking it out, he opts for knocking that goody-goody right out of the picture, so he'll never make him lose face again.

2) King Saul
He was crowned Israel's very first king, but not even the highest of all honours is enough to shut out the green eyed monster.You know you're in a bad way when a guy you hire to calm you down with soothing music sends you into fits of envy and rage every time he steps in with his harp. Saul makes many attempts to end David's life long before he ever looks like becoming his successor. When crowds are heard chanting, 'Saul has slain his thousands and David his tens of thousands,' he can wave goodbye to any peace of mind he has left. Where's the glory in having killed thousands, as long as the one elusive brat who keeps showing you up remains alive?

Now we get to jealousy throughout the classics. I'll start with some of the milder cases, and finish up with prizes for the most insane and destructive.

3) Edward Casaubon
The middle-aged scholar had a beautiful young wife on good terms with a handsome, destitute relative of his, about her own age. Instead of giving their friendship the nod of approval, our man simmers with bitter jealousy that takes its toll on his dodgy heart. It comes to light during the reading of his will, in a very pointed codicil. Dorothea, his wife, will have her inheritance stripped from her if she ever marries Will Ladislaw. Come on man, was it necessary to mention him by name? And does it really matter what the pair of them get up to together, once you've passed on to a better world? I truly believe he might have actually put the idea in their heads. (My review of Middlemarch is here.)

4) Severus Snape
The grouchy exterior of Hogwarts' Potions master is largely formed by years of rampant jealousy. Lily Evans, the girl he always loved, married James Potter, the bully who picked on him. Severus could never let it go. His jealousy leads to reflexive actions that result in the unintended death of his beloved. Even then, he harbours a smouldering grudge against her innocent son, for no other reason than he resembles his dead father. Severus dude, you did keep your promise, but you could have done it with far more grace.

5) Antonio Salieri
Anyone who ever watched the movie 'Amadeus' will remember the playing out of what was represented as a true, historical grudge. Salieri is an accomplished Austrian composer who recognises unbridled genius in his young counterpart, Wolfgang Amadeus Mozart. Salieri's choice of thoughts helps fan a flicker of jealousy into a raging inferno. He just can't move on from demanding, 'Why should God give this magnificent gift to a flippant, cheeky teenager instead of a devotee like me who adores music and works my butt off?' Don't ask impossible questions, Antonio. He ends up driving Mozart to death, and pushing himself to the brink of madness.

6) Uriah Heep
This slimy, smarmy young Dickens villain is driven by pure jealousy. His workhouse origins (or 'umble beginnings, he'd call them) keep him on the lookout for anybody he sees in more favourable circumstances. A steady flame of malice fuels his favourite hobby of slowly but surely ruining people, and taking them down. David Copperfield finds himself on Uriah's hit list. It's not a hobby to be proud of, yet Uriah devotes all his time to it. (My review is here.)

Okay, we've made our way to the big guns. The final pair are my favourite examples because of the sheer obsessive recklessness they employ in their attempts to destroy the objects of their envy.

7) Isaac Boxtel
He's mad about the gentle art of tulip growing, but his neighbour Cornelius grows better flowers and has a greater chance of winning a prestigious competition. It should be a clear sign that when you stop pursuing your enjoyable hobby to figure out how to knock out your rival, you've lost touch with what's really important. But Isaac is too far gone to reflect that tulip growing has progressed to attempted murder, continual surveillance, theft and simmering obsession. He really believes these are all just part and parcel of tulip growing. (My review of The Black Tulip is here.)

This guy could be Charles Dickens' most intense villain, masked with the respectable title of school teacher. He's a cross between a stalker and a mountain troll, driven by jealous adrenaline. Bradley has set his hot-blooded desire on Lizzie Hexam, a young woman within his own humble sphere. But he suspects she yearns for the love of Eugene Wrayburn, a witty young lawyer from an illustrious family. Eugene can dismiss slow-witted Bradley with comedic insults, but underestimates the force of sheer animalistic loathing. Bradley has the grim patience to stalk him, waiting for an opportunity to strike. He's forever mopping passionate perspiration from his brow, and eventually even the thought of Eugene together with Lizzie causes spontaneous nosebleeds. I tell you, Bradley's obsession, and Eugene's careless obliviousness, keeps readers on the edge of our seats. (My review of Our Mutual Friend is here.)

It's such a destructive list. In almost every case, jealousy leads to either intended or actual murder. But each of these insanely jealous guys is destroying his own life most of all. I tend to think the main thing they teach us is to steer clear of following their paths, because from our vantage point, we can see they are heading up hopeless blind alleys. Accepting circumstances, even when they appear unbalanced or unfair, must surely be preferable to driving yourself nuts with paranoia and misery. If it's at all possible to shake off jealousy and wish our rivals well, or at least let them go their own way, let's do it for our own sake. Perhaps the only people we should be jealous of are those who genuinely never experience a jealous moment.

I know this list is by no means complete, so can you think of any others. Or are any of your favourite examples shown here?