'Our Mutual Friend' by Charles Dickens 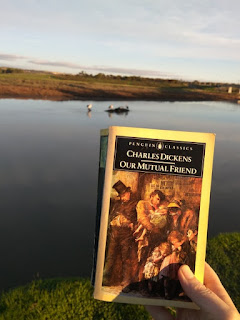 A satiric masterpiece about the allure and peril of money, Our Mutual Friend revolves around the inheritance of a dust-heap where the rich throw their trash. When the body of John Harmon, the dust-heap’s expected heir, is found in the Thames, fortunes change hands surprisingly, raising to new heights “Noddy” Boffin, a low-born but kindly clerk who becomes “the Golden Dustman.” Charles Dickens’s last complete novel, Our Mutual Friend encompasses the great themes of his earlier works: the pretensions of the nouveaux riches, the ingenuousness of the aspiring poor, and the unfailing power of wealth to corrupt all who crave it. With its flavorful cast of characters and numerous subplots, Our Mutual Friend is one of Dickens’s most complex—and satisfying—novels.

MY THOUGHTS:
Here's my choice in the Nineteenth Century Classic category of the 2019 Back to the Classics Challenge. By the finish, I was wondering why this particular novel slid under my radar for so long. It ticks all the boxes a brilliant Victorian novel should. After my experience with Dickens so far, I'd summed him up as a guy who never managed to get any real sexual chemistry happening between any of his couples. Whoa, I'll have to beg his pardon after this. The mutually repressed physical attraction of the secondary plot, with Lizzie and Eugene, is sizzling hot, especially in what isn't being said between the lines we read. They're my favourites. And the other romance, with Bella and John, is sort of sweet too. But first things first.

There are several plot threads that converge on each other, not to mention snobs, schemers and scoundrels hatching up blackmail attempts. Enough copies and variations of the same will to verge on comedy, and no less than four very awful villains we're induced to love in a literary sense for their sheer depravity. Plus many bodies recovered from the River Thames, either dead or alive. In fact, the great River flows through the whole story as a common thread.

It's a teeming story to attempt to summarise, proving there's never more than a few degrees of separation between Dickens characters, as the title suggests. The butterfly effect of seemingly unrelated incidents never ends. It all starts with the death of an old miser named Mr Harmon, who built his fortune in the rubbish dump business. His son John, who is set to inherit the empire, is found floating dead in the Thames. This has a life-changing impact on several others, including Bella Wilfer, the girl John was meant to marry, and Mr and Mrs Boffin, the kindly employees  who inherit the estate in the absence of the heir. They also hire a mysterious but eager young man named John Rokesmith as secretary, to help them keep their floundering heads above water.

The ripples keep spreading. John Harmon's body was first discovered by a scruffy old no-hoper named Gaffer Hexam, who makes a sort of dubious living robbing drowned corpses. His gentle daughter Lizzie turns a blind eye to the family 'business' out of loyalty to her dad, although everyone trying to sort things out intuits what's going on. Mortimer Lightwood, the young lawyer who has been hired to take care of the Harmon affairs, is drawn in deeper than he expects. Especially when his best friend, the super bright but apathetic Eugene Wrayburn finds himself attracted to Lizzie before he knows what's hit him.

Although it kindled my imagination, I'm not claiming it's perfect. But since the flaws themselves are worthy of discussion, perhaps they add extra fuel, making it perfect in a different sense. For example, did the great Dickens have some timing lapses in his weaving between romance plots? The thread with Lizzie and Eugene is so urgent, intense and fast-paced in the final third, could Bella and John really have had time to conceive, incubate and deliver a baby in that same block of writing? For that matter, does the Bella and John plot leave you indignant on her behalf? It clearly wasn't meant to make us mad, but I can imagine different readers debating whether or not she was treated completely fairly by those she loved the most. They are the sort of technical and ethical questions I'd love to throw around with other readers. So yes, maybe the huge scope for further discussion does make the book ideal.

There are happily-ever-afters for those with the admirable character and good hearts to deserve them, which always gives me warm fuzzy feelings. It doesn't come across as an unrealistic, simplistic wrap-up though, because although the 'good' guys have happy endings, the more villainous characters wouldn't necessarily envy them or agree they are happy. In other words, the endings are only happy because of their innate integrity. Bella chooses John over the luxuries she thinks she needs for a happy life, and later gets a huge surprise. And Eugene chooses Lizzie, even though he knows it means becoming a social pariah, but he doesn't give a rat's behind. (Honestly, a posh gentleman's son with a law degree choosing to marry the daughter of a thieving, illiterate river scavenger would raise eyebrows even today, so no wonder it rocked the snooty socks off those snobby Victorians! You've got to step back to reflect how shockingly subversive Dickens was for even writing their story in such a way.) Happiness comes to those who are content with little, or who recognise that what seems worthless to others is really hugely valuable.

1) Eugene Wrayburn, who reminds me a little of my two sons. Funny, perceptive and original, but a 'that-don't-impress-me-much' sort of guy. Many readers may call him a lazy-bones, but I preferred to think of him as motivationally challenged.

2) Bradley Headstone, the dense but intense school teacher, who knows what he wants and loathes anyone who might stand in his way. Dickens describes Bradley as 'an ill-timed wild animal, white-lipped, wild-eyed, draggle-haired.' The sort of guy anyone but a consummate smart-aleck might fear to cross. (More about him here.)

3) Jenny Wren, an absolute delight. She's a lame teenager with a drunken dad, and manages to make ends meet by sewing dolls clothes for a living. 'A child in years, but a woman in self-reliance and trial.' She has the cool sort of eccentricity to rise above adverse circumstances, thanks to her imagination and optimism. And whenever she steps into a scene, you expect to end up smiling.

The first part is the slowest, as we need to make allowances for Dickens getting it all set up, but it's well worth it for the way he lets all hell break loose later on. I hope I've convinced you to get hold of a copy ASAP, and if you do, please feel free to discuss the finer points of the plot with me afterwards. I'll always have time for our mutual friends from Our Mutual Friend.

I'm also going to slide it into the European Reading Challenge 2019 as a selection from The United Kingdom.