'The Black Tulip' by Alexandre Dumas 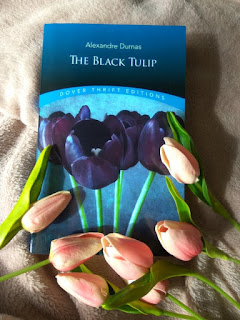 'To have discovered the black tulip, to have seen it for a moment...then to lose it, to lose it forever!'
Cornelius von Baerle, a respectable tulip-grower, lives only to cultivate the elusive black tulip and win a magnificent prize for its creation. But after his powerful godfather is assassinated, the unwitting Cornelius becomes caught up in deadly political intrigue and is falsely accused of high treason by a bitter rival. Condemned to life imprisonment, his only comfort is Rosa, the jailer's beautiful daughter, and together they concoct a plan to grow the black tulip in secret. Dumas' last major historical novel is a tale of romantic love, jealousy and obsession, interweaving historical events surrounding the brutal murders of two Dutch statesman in 1672 with the phenomenon of tulipomania that gripped seventeenth-century Holland.

MY THOUGHTS:
What a madcap tale of fanaticism, passion and jealousy this one turns out to be. Here's my most valuable tip straight off. Please don't let the somber nature of the first few chapters deter you from persevering, as I almost did more than once. It's a bit like shaking the plug of congealed tomato sauce from the neck of a bottle. Once you've passed that point, the entertainment flows perfectly. The purpose of the tough and sad beginning is to ground the story to a real, historical event, as you'll see. It's something Dumas liked to do. In this case, he retells a tragic event in which two noble statesmen are falsely accused of treason and savagely mauled to death by an angry mob while they attempt to flee for safety. Whew, once we get over that hurdle, the fun begins.

Cornelius Van Baerle is a good-natured young doctor who enjoys a bit of gardening in his spare time. He's introduced as a 'happy mortal' which extends to his tulips, since he has an incredible green thumb. A contest offering 100 000 florins for the creator of a perfect black tulip is announced, and he rises to the challenge, pouring his heart and soul into it. It's a very tough call from the Horticultural Society, who don't really expect anyone to pull it off. They are willing to offer such a huge prize because black tulips are rarer than hens' teeth. But our boy Cornelius is quietly confident.

Little does he know he has a mortal enemy in his next door neighbour, Isaac Boxtel, a fanatical gardener himself. Cornelius has made some home renovations which unintentionally messed up the direction of sunshine on Isaac's tulip garden. He also unknowingly knocked Isaac's name off an illustrious list of tulip growers from their town. Now Isaac is out to get him! He's so intent on keeping an eagle eye on whatever Cornelius is doing that his own tulip beds suffer from neglect. Obsessing over his young neighbour becomes Isaac's whole life. It's the classic jealous guy's mistake of forgetting what pursuing goals is really all about, but it doesn't matter to him. Because when he bumps off Cornelius, he'll steal any bulbs or black tulips he manages to leave behind.

Boxtel manages to pull some crooked strings to get Cornelius arrested on false charges of high treason, but his sentence is reduced from execution to life imprisonment. Cornelius now has one ace up his sleeve which neither man even realise the full value of at first. He's won the love of Rosa, the daughter of Gryphus the jail keeper. She thoroughly supports Cornelius' quest for the perfect black tulip and does her utmost to help him achieve his goal. Meanwhile Isaac sneaks around in the background, trying to thwart them. At this stage, pouring the same creative effort into growing his own tulips doesn't even enter his head. 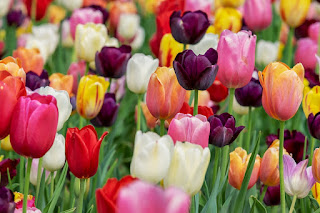 'Tulip mania' was a real thing. Dumas simply used the historical time period, when the price of bulbs soared sky high, as a backdrop for his story. The fervour of these Dutch tulip growers gets me grinning every page. They hold fast to a creed of logic. 'To despise flowers is to offend God. The more beautiful the flower, the more God is offended by contempt of it. Now the tulip is the most beautiful of all flowers, therefore he who despises the tulip offends God exceedingly.' Proof that it's possible to fit anything into a logical framework if you feel passionately enough about it, hey?

The watery landscape features are interesting too. We are told you can't ever go as the crow flies in Holland, 'a country which is more cut up by rivers, streams, rivulets, canals and lakes than any other country in the world. I've never been there, but have been told by people who lived there that it's precisely what it's like. So I enjoyed my bit of armchair travel.

I imagine books playing out as movies on my mind's screen while I read, and this one is definitely an animation! Cornelius is a Prince Charming look-alike, while I picture Boxtel to be something like Aladdin's Jafar, with all the extreme, twisted facial expressions. But within all the exaggerated fun, good object lessons abound. Some researchers believe an individual's set point of happiness has a way of re-adjusting itself to circumstances. That definitely seems true of these two characters.

For the unlucky Cornelius, life soon becomes sweet and full of hope again. Even while he's being led to the scaffold, he consoles himself with the anticipation that in a matter of mere moments, he will get to witness all the beautiful tulips of the world from the height of heaven. 'One stroke of the sword and my beautiful dream will commence.' Saved on the spur of the moment, he's just as optimistic behind bars. But Isaac Boxtel, in his intense focus on what's slipping through his fingers, ignores every other good thing he has. It's easy to tell who is the real prisoner. The morals are in our faces, but still easy to take on board. Coupled with his bitter jealousy, Isaac is a man who's into name-dropping and hobnobbing with bignobs. 'He takes from everyone a little of his importance to add it to his own' just as he's not above stealing flowers. That sort of person doesn't always get what he deserves in real life, so it's satisfying when he does in a story.

Recommended for anyone who enjoys a zany bit of fun.