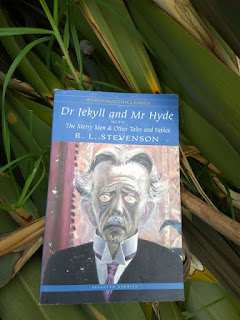 MY THOUGHTS:
This is my choice for the Novella Category of the 2019 Back to the Classics Challenge. Not only is it a very small book (less than 60 pages in my volume) but it's the small book that helped established Stevenson's reputation. That's impressive, considering there are virtually no female characters, and no males who can be considered especially endearing, except for a glimpse of one sweet old gentleman who becomes a victim of the plot.

Here's what happens. A lawyer named John Gabriel Utterson has had brushes with a ruthless crook named Edward Hyde, who roams the streets of London. Hyde's crimes include bashing innocent people for the pure love of violence. But Utterson's old school chum, Henry Jekyll, takes a special interest in the young man, and even makes him the sole beneficiary of his will. Utterson wonders if his good friend is somehow being blackmailed. The truth turns out to be far more bizarre. The very earliest Victorian readers were no doubt gobsmacked by the big revelation, although we of the twenty-first century know what to expect from page 1. Robert Louis Stevenson probably lived to discover one major drawback of being immortalised in the halls of fame. Everyone will always know big spoilers for your story.

Although we get what we expect pretty much, here are a few things I found interesting, which might negate some assumptions we make going in.

1) Henry Jekyll was no helpless victim swept along by the current, or at least not at the start. His skills as a chemist put him in the position of having a choice. You either take the potion at certain times to transform yourself into a heartless raving psychopath, or you don't. He caves in to temptation and chooses to let his Hyde persona have carte blanche ... as long as it's at specific times set aside for him. Maybe Jekyll is a handy representative for many men throughout history who have tried to assume a squeaky clean public face, and keep their more squalid characteristics under cover. The fact that we even hear about several cases to make the comparison indicates that they often don't end well.

2) We can't reasonably expect to keep our good and evil sides isolated from each other for long. The evil will gradually leach in to infect the good, since that's the way it usually works in stories rather than vice versa. Maybe it's the way it works in life too. Stevenson clearly believed we shouldn't even let our bad sides get a look in as far as we can help it, but snip those murky impulses in the bud as soon as our conscious minds detect them. Yet Henry Jekyll goes so far as to create a nice little apartment and stamping ground for his. I guess Stevenson's point might be that we are following Jekyll's example whenever we insist on entertaining certain types of thoughts and habits over and over again.

3) The danger of addiction is real. Jekyll assures Utterson, 'You do not understand my position. The moment I choose, I can be rid of Mr Hyde.' Ha, that's what you think, mate! Before he knows it, he's waking up in the form of Hyde instead of himself, even when he reasons that it shouldn't be happening. It reminds me of statements such as, 'I can stop drinking/smoking/shopping/watching internet memes whenever I choose.' Some may even suggest that our own Mr Hyde may appear as innocent as chocolate, sugar or social media.

4) The description of Hyde's physical appearance is thought-provoking from a symbolic perspective. He's younger, smaller and lighter on his feet than Jekyll, which adds to the pleasure Jekyll feels whenever he assumes his form. Towards the end, other characters speculate reasons for their stature differences. Maybe Hyde had formerly been restrained with not as much room to develop, yet rapidly became more robust as he was allowed lengthy stretches of free reign.

Also, Hyde has a repugnant effect on strangers from first glimpse. People, including Utterson, get the impression of some repulsive deformity without being able to pinpoint exactly what it is. Is Stevenson suggesting that Hyde's might be the face of pure evil made visible?

I wonder who could have predicted that such a short story was destined to become not only a classic but a cliche. Perhaps it pleased two quite different types of Victorian readers; those who liked to be thrilled by a bit of sensationalism, along with those who tended to stick to moralistic tales urging us to be good. In this manner, the story itself could be regarded as a bit of a Jekyll and Hyde. Maybe that was Stevenson's card up his sleeve.

But from my 21st century vantage point, it didn't impress me overly much. There's just no way of saying how awesome the wow factor might have seemed had I been around to read it in 1886 when it was hot off the press. It's still worth a read for some of the brilliant descriptions of London life back then.