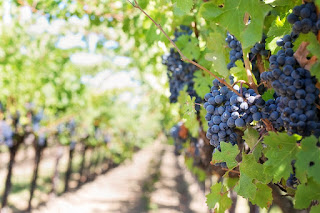 When it comes to keeping stories alive, nothing really beats word of mouth. 'The grapevine' gets a rough wrap sometimes, because things like secrets, slander and rumours tend to multiply to plague proportions. Scandals are like weeds. They begin in some small corner of the garden, but before long, they've choked the good plants and everyone knows all about it.

But I'm sure we've all heard the saying, 'Why should the devil have all the good music?' In a similar way, we could ask, 'Why should the gossipers monopolise the grapevine?' When we use our tongues and pens to share good stuff, it's like cultivating a vineyard. Encouragement, beauty and inspiration have a chance to grow. Maybe when we look at it this way, we could even think of it as a responsibility.

Here's how I've seen the grapevine work within fiction itself, from a few random examples.

The Little Prince
A beautiful desert fox tells the small title character a great secret with which to approach life. In turn, the Little Prince passes it on to the narrator of the story, who he befriends when the man's small plane crashes. And then the narrator writes it in his book, and therefore tells us all. (To know more about the secret, see my review of The Little Prince.)

Emily Climbs
During a walking trip, the young heroine stays overnight with some acquaintances, to dodge wet weather. An elderly relative of theirs tells a story from her long gone past, about a time she worked as a nanny in a palace, and smacked the six-year-old heir to the throne for being naughty. Emily asks permission to write it as a story for a magazine. Weeks later, a famous writer and journalist named Miss Royal reads the story, and contacts Emily to offer her a job. So the tale of 'The Woman who Spanked the King' travels further than the young palace employee ever imagined.

Frankenstein
The poor, tragic monster has been sewn together from random body parts. He manages to track down his creator, young Victor Frankenstein, and insists on telling him the story of the horrible rejection he's experienced since Victor first breathed life into him. Although Victor wants nothing to do with him, he agrees that he owes the monster the courtesy of listening. Then way later, he repeats the story to his new friend, sea captain Robert Walton, on whose vessel he's been rescued. It's such an incredible story, Robert includes it in the letters he sends home to his beloved sister Margaret. She presumably tells her husband and children. The message that we should treat people with kindness regardless of their initial appearance stays alive each time it's passed along. (Here's my review of Frankenstein)

Wuthering Heights
Catherine Earnshaw confesses her love for Heathcliff to the housekeeper, Nelly Dean. More than eighteen years down the track, Nelly repeats it to the convalescing Mr Lockwood, while she entertains him with the tale of his gruff landlord's personal history. Lockwood writes it in his personal journal and voila, more of the cosmopolitan people he rubs shoulders with have the potential to hear this tale of great love, and the folly of denying your own heart for social and monetary gain. (See my review of Wuthering Heights)

Although none of the stuff I've written online has ever gone viral, I'm always aware that we never know the full extent of how our spoken or written words might impact others. Between 2000 and 2014, I wrote nine novels which sold thousands of copies that disappeared into the ether. Every so often, I receive sudden welcome messages, as if from nowhere, about how one of them has been greatly appreciated by someone. It's always great to get feedback about older novels which have been read and enjoyed recently. Books and stories really are timeless.

So I'd like to encourage us all that this might be one of the simplest way to help change the world. We could write reviews about great works others have written, which is what this blog is all about. I also enjoy visiting the blogs of several other book reviewers. We can easily share stories and incidents, that have come across our path from others and lifted our hearts. Maybe our favourite questions could be, 'Can I share that?' or 'Would you mind if I tell my small group of friends?' or 'Could I incorporate that into an article I'm writing, if I give you credit?'

Let's keep the good grapes growing.
Posted by Paula Vince at 5:00 AM