'War and Peace' by Leo Tolstoy 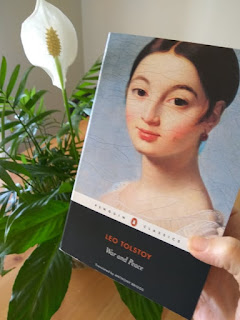 MY THOUGHTS:
Whoa, what an epic! It's my choice in the Very Long Classic category of the 2019 Back to the Classics Challenge, and at over 1300 pages, I'm very proud of myself. Now I'm among those people who can tick reading this behemoth off my bucket list. It's the size of a brick, but well worth reading. The story is set during the early nineteenth century, when Napoleon was leading French forces to invade Russia, and focuses on the lives of a few aristocratic families; the Bolkonskys the Rostovs and the Bezukhovs.

Readers with time on their hands have tallied over 600 characters altogether, which I believe we can whittle down to five major ones, including two brother and sister duos. There's Prince Andrei Bolkonsky, a disillusioned officer, and his pious sister Marya. And impulsive young Nikolai Rostov, off to war wet behind the ears, and his lively little sister Natasha. And then there's Pierre, the poor rich kid on the block.

It's a fair call to generalise that the two main families have opposite vibes happening. The Bolkonskys are cool, pragmatic, rational thinkers. Their crabby old dad, one of the most colourful characters, is a domineering former war hero who takes these cerebral traits to their unpleasantest extreme. On the other side, the Rostovs are reactive and passionate, driven by big emotions the second they feel them. Nikolai is a show-pony and tinder-box, ready to blast anyone who offends him. Natasha is unfocused, restless and falls for five guys within the course of the novel. Anyone in trousers, it sometimes seems. (In her defense, it is an extremely long novel.) The Rostovs are not lukewarm people but totally hot and cold, making some serious mistakes. It's a family trait, and their father is a great, pleasure-loving entertainer with the unfortunate fault of overdrawing on his estate, until he realises they're almost broke.

It's a really interesting read to see how two families poles apart in their thinking may influence each other, romantically and otherwise, and how the events of the plot stabilise and modify all of them.

I think my favourite main character is probably Pierre Bezukhov. He's a tubby and bespectacled young man who wants to understand all the ins and outs of life, but is swept around by every wind blowing. Even though he's shy and awkward, he still manages to make several social blunders, until he unexpectedly inherits his father's vast estate and becomes one of Russia's wealthiest men. Then people start overlooking his faux paus, to focus on his money.

I've never really pitied the recipient of an obscene windfall before, but Tolstoy really hones in on the dark side of Pierre's amazing luck. 'Coming as it did after a life of solitude and easy-going pleasure, now made him feel so hemmed in and preoccupied, the only time he could be alone with his thoughts was in bed.' This lovable nerd becomes the innocent target of wolves and sharks, and totally buys into all the scraping and fawning from people who never wanted to know him before. He tries hard not to be 'that guy' always on the verge of letting people down, and his guileless nature puts him in the position of a lamb on the chopping block. One of the things he's pushed into is marriage with Helene Kuragin, a ravishingly beautiful, but unscrupulous woman.

Part of what makes this saga special is the disillusionment and soul searching of our two main boys, Andrei and Pierre. Both are earnest seekers of something that seems elusive, no matter what they do and how hard they think (or overthink). Yet harsh circumstances brings each to his separate epiphany, which after a book so thick can be expressed in a sentence or two. Prince Andrei's is to do with the vital power of inclusive, divine love for everybody. And Pierre's is all about having the freedom to choose our attitude. The circumstances in which these two learn their lessons are epic.

Another really cool thing about the book is the inclusion of true, historical people as characters in the story. Tolstoy was one of the first authors to experiment with this, and I'll bet he thoroughly enjoyed writing Napoleon! He kept making the French invader come across like an absolute duffer. In real life, the poor guy's army was unexpectedly defeated by the Russians he invaded, and then later he was decimated by this Russian author's pen. 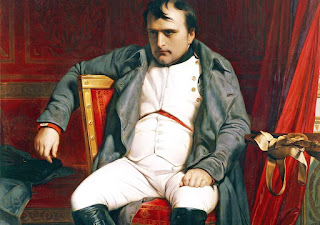 Whenever Napoleon stepped into a scene, I knew some unflattering portrait was coming. He was pompous, or arrogant, or having sneezing fits, or deserting his men, or getting his chest hair combed, or tweaking someone's ear, or singing his own praises, but often merely incompetent. Tolstoy slid in every dig he could, including the sort of play-on-words which likens his name to the state of his head (think 'Boney-Part'). I guess we have to take this with a grain of salt, considering Tolstoy clearly had an agenda. As my teenage son remarked, anybody in the position to have a shot at world domination must presumably have a few brains. But Tolstoy's Napoleon is very humorous to read.

One thing any reviewer is probably obligated to warn wannabe readers is that there is lots and lots of philosophical waffle, as Tolstoy airs his personal theories about the causes and nature of warfare, and the drawback of historians' way of making records. He does it over and over and over and over again. I don't object to the material itself so much as the fact that he deals it up within the pages of a novel. Seriously man, some people don't want their stories to keep being interrupted with major essays that would fit better in dry, historical journals. Maybe he thought it would be the only way some of us would get this sort of lesson (which is probably true). So although there are such very dry sections to drag our feet through, it's worth it for the good stuff.

The very last character to make an appearance is Prince Andrei's son Nikolai, who was born early on in the book, and has reached the age of 15 by the end. This teenager has just had a vivid dream, and lies excitedly in bed, thinking of all the ways he'll make his beloved Uncle Pierre proud, and become loved by everyone. I was actually sort of disappointed to have it end there, as if 1300 pages was not enough! I would have happily read on to see how he fared, and find out all about the next generation. That's proof that even though my hand was aching with the weight of holding it, Tolstoy did something right.

It's a five star read, without a doubt. In fact, when I turned the last page, I felt torn between wanting to keep a respectful, contemplative silence, or giving Tolstoy a standing ovation. I think I might even have some sort of 'Yay, I finished War and Peace' party for one.

It also counts toward my 2019 European Reading Challenge, as a selection from Russia.
And you might also like to compare it to my thoughts on Anna Karenina, another Tolstoy masterpiece.