'The Catcher in the Rye' by J.D. Salinger 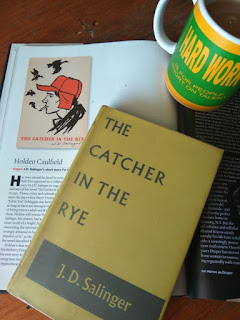 J.D. Salinger's classic novel of teenage angst and rebellion was first published in 1951. The novel was included on Time's 2005 list of the 100 best English-language novels written since 1923. It was named by Modern Library and its readers as one of the 100 best English-language novels of the 20th century. It has been frequently challenged in the court for its liberal use of profanity and portrayal of sexuality and in the 1950's and 60's it was the novel that every teenage boy wants to read.

MY THOUGHTS:
This is a classic I've wanted to read for some time, and finally got a chance. I've also read Salinger's Franny and Zooey but prefer the Catcher by far.

Young Holden Caulfield has a problem. He detests phonies. Social climbers, fakes, name-droppers and try-hards of all kinds are everywhere, and he considers himself too honest to play the game. Since he hates the pretension of the school system, Holden won't put forth the effort to do any work. But his silent protest has caused his expulsion from three schools, and he's just been kicked out of a fourth. He knows it's all part of their showiness, since they won't tarnish their own image with under-achievers. But he hasn't quite figured out that playing the martyr role isn't hurting their reputation, but only harming his own future prospects.

The story takes place over three days, when Holden decides to walk out of Pencey Prep, his latest boarding school, half a week before his parents expect him home, and just hang out in New York City doing whatever takes his fancy. Holden makes a valiant effort to be a party boy, although he's a loner at his core. His first night is wild. The amount of activity he crams in between his last school dinner and waking up the following morning sounds physically impossible given the time frame. To sum up a little, he hits the town, writes an essay, tries to get some sleep, changes his mind and catches a train, dances in a ballroom, hangs out in another jazz club, walks 40 blocks back to his hotel, and and has a run-in with a couple of sleazy people, all under cover of the same never-ending darkness. But dawn eventually breaks, about ten hours after it should have, in my opinion.

Although I'm not a big fan of some of the things he attempts to get up to, I greatly admire the boy himself. He's always polite to adults, easily imagines himself in other people's shoes, and never grumbles for nothing. There's always some well-formed reason to support his negative opinions, which he explains with a lot of original perception and humour. And surprisingly, there's hardly any profanity in my opinion, given what I'd been led to expect in the blurb. In fact, Holden goes out of his way to scrub rude graffiti off walls, so innocent kids don't have to see it.

To me, Holden's narrative proves the benefits of journal keeping. He takes a stream of consciousness approach, with one train of thought leading on to something quite different, including flashbacks and philosophical rants, that help reveal what's really ticking inside his troubled psyche. He notices some of those a-ha moments himself, but others are left hanging there for readers to latch onto if we're alert enough, which reveals details about us in turn. So it's the sort of novel where readers are invited to do some of the work, but we're rewarded for it, and may even come up with different, multi-layered themes.

Here's an example of one of mine. I believe Holden Caulfield shares with me an appreciation for sacredness and stability in a world of rapid change. We depend on some things remaining reliable, predictable, and certainly not phony. This drives his memories of good old school excursions to the museum, where all the exhibits are set up in a static, predictable pattern, even when the students themselves have undergone subtle changes between visits. We've learned by now that his younger brother died a few years earlier, which no doubt feeds Holden's phobia of change. The events of his life have been incorporated into the person he's become.

His story also tips us off to watch our own thoughts, because a plunge into deep depression can often be traced back to some simple germ in our mind that catches hold and shoots off. One of Holden's signature lines is, 'The more I thought about it, the more depressed I got,' about several simple catalysts. His thought life tugs poor Holden on a real downward spiral, which even begins to show up as physical symptoms. Dizzy spells, stomach aches, IBS and a lump in the throat which causes him to reflect, 'If you get very depressed about something, it's as hard as hell to swallow.' Considering that his story takes place in the 1950's, when not many people knew about such things as panic disorders, this book is a gem that's way ahead of its time.

Don't listen to voices out there urging us not to read it. It's been banned over the years, for 'glorifying a rebellious attitude', which sounds crazily shortsighted to me. It's a simplistic view that Holden himself would deplore. A delve beneath the surface reveals that his rebellion certainly isn't doing him any favours or giving him any fun, so there's not much 'glory' to attract other potential rebels. Taking it off the shelves just prevents others from taking the lessons Holden learns on board, who could really benefit from them.

Some of the more modern criticism leveled at poor Holden is to do with his identity and privileged position in society, which they believe makes him an ingrate for complaining. He's a young white male from a wealthy family (Dad a corporate lawyer) who do everything possible to give him a boost in life, including enrolling him at prestigious schools. These readers say, 'Suck it up, because there are people from minority groups everywhere with real problems who'd love to have yours, you entitled little git.'

Hmm, well since Holden Caulfield would be a very elderly granddad if he was still alive today, I'd like to have a try at addressing this sort of censure with his own teenage voice. I believe Holden might say something like, 'I get really irritated by people who get a kick out of guilt-tripping others who already feel bad. Why are minority groups the only people you'd readily excuse for feeling deeply blue about what they see in the world around them? Piling more shame on the shoulders of somebody who feels burdened is a pretty cruel move. You're using my gender, race, skin colour and economic status against me, in an attempt to put me down. Isn't that the same sort of discrimination you claim to hate? The more I think about that, the more depressed I feel.'

I'd urge anyone to give this book a read, and not write off this boy as the sort of person you couldn't learn anything good from. Besides, it ends on an uplifting note, as he experiences a sudden burst of happiness, during a moment spent with his kid sister. I get the strong impression that he's onto a breakthrough. Although those phonies and antagonists will never go away, we can dilute their influence by directing our own focus on the simple goodness out there. Even though Holden still has a long way to go, there are positive signs he'll make it through, a more peaceful and optimistic man. I thoroughly enjoyed the book, and took a half mark off simply because of that impossibly long night. Maybe Holden should consider a career as a time management consultant, if he can stretch out the hours like that.