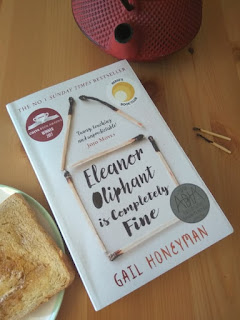 No one’s ever told Eleanor that life should be better than fine. Meet Eleanor Oliphant: She struggles with appropriate social skills and tends to say exactly what she’s thinking. Nothing is missing in her carefully timetabled life of avoiding social interactions, where weekends are punctuated by frozen pizza, vodka, and phone chats with Mummy. But everything changes when Eleanor meets Raymond, the bumbling and deeply unhygienic IT guy from her office. When she and Raymond together save Sammy, an elderly gentleman who has fallen on the sidewalk, the three become the kinds of friends who rescue one another from the lives of isolation they have each been living. And it is Raymond’s big heart that will ultimately help Eleanor find the way to repair her own profoundly damaged one.

MY THOUGHTS:
The title didn't grab me when I first saw it. I thought, 'Eleanor's obviously not fine at all,' and walked past. Since then, it's become a phenomenon, with must-read recommendations from all sorts of people. When I saw it at a bargain bookshop, I thought I'd take my chance. I had two false starts, finding it hard to muster the interest to get beyond a bikini wax appointment at the start. But even more readers kept the glowing reviews coming, and rumours of a movie are in the pipelines. So I pushed through and finished the book at last. It's all about lonely Eleanor with a horrific past she's trained herself never to think about, and Raymond, the friendly IT guy who takes a genuine interest in her, making him the very first.

Other workmates have largely ignored her because Eleanor's not easy to warm up to. She's been totally alienated for a good two thirds of her life, which hasn't been great for her social skills. She's sharp, observant and tends to make outrageously tactless statements, partly because solitude hasn't given her empathy muscle much room to develop, and partly because not having rubbed shoulders with others, she simply hasn't picked up socially acceptable responses.

I share the love for the features other readers rave about. It's great that a doughy, paunchy, super-scruffy IT worker like Raymond is shown to be the hero his kind heart makes him. This guy deserves to wear a cape. I like the revelation that small, simple deeds we may not even bother offering could actually be what makes the world go round. I like Eleanor's growing appreciation for Raymond, who she dismisses as a bore and a slob at first. And what I love most is seeing how success and progress for Eleanor means returning bravely to the life she was already living. It's so true that often what's required isn't worldly accolades, material goods, or change of circumstances, but simply a fresh outlook. We don't need to make a splash or public stir of any kind to be worthwhile human beings.

With all these excellent qualities, I was still a bit ambivalent when I finished. I loved the end, but for the first two thirds, I wasn't driven to pick up the book. I think it's because of what I'd call a broken record quality. There's a predictable repetitiveness, when a basic episode keeps recurring in slightly different circumstances. A huge chunk of the book is full of incidents that fit into either of these two categories.

1) Eleanor goes for some beautifying, pampering or retail therapy. The stranger behind the counter reacts with the rolling of eyes, or some other sign to show that she comes across as an eccentric. Or 2) She is out at some lunch, party or social event, and makes a tactless comment that proves she's unaware of social conventions. Raymond almost chokes on whatever he's messily chewing, stunned yet again by her frankness or naivety, until he recollects himself and things start rolling again.

The story's bestseller momentum is speeding faster than its glacial plot. So many thousands of readers have taken lonely, weird Eleanor to their hearts, I wonder if that love is extending to the real-life oddballs in their own offices and schools. Or are these solitary bods still sidelined and overlooked while their acquaintances are standing around, raving on about their compassion for Eleanor Oliphant? If it truly does open people's eyes to the invisible mass of traumatised and depressed folk around us, and inspire us to take on Raymond's simple mission, it'll be worth every cent spent.

But maybe it's not entirely about others at all, but more about us. Maybe we warm so readily to Eleanor because she displays many of our own secret personal doubts. (Minus her lack of close family members and horrific background.) Do we relate to her impression of being a perpetual fifth wheel in the world, unnecessary and unappreciated? Or her floundering feeling of not quite grasping the social cues that link everyone else? Or her empty yearning when she scrolls down the social media of others? Or foolish, personal histories of getting carried away on waves of imaginary saviours and rosy futures? I can raise my hand to all of these, at different moments. If the story helps us be easier on ourselves, it's worth every cent spent too.

Some of the healing things that help Eleanor start to live again, when she's faced her traumatic past, include simple fixes that can do anyone good. 'Noticing detail, that was good. Tiny slivers of life added up, and helped you feel that you too could be a fragment. When you start to notice things around you, you feel lighter.' There's one for any of us who find ourselves in an intense fog of preoccupation.

Being a skillful helper like Eleanor's psychologist Maria Temple may be far from reality for many of us, but maybe we could at least aspire to be like Raymond (although he is amazing in pushing through with somebody whose manner isn't particularly warm.) Or we could be like his mother Betty, who Eleanor calls 'quite simply a nice lady who raised a family and now lives quietly with her cats and grows vegetables. That is both nothing and everything.' Or Sammy, the loving old dad whose friendliness extends to his rescuers.

I don't want to give the idea that nothing but random acts of kindness ever happen. There's a poignant subplot where Eleanor allows herself to form pipe dreams about a random, handsome face, and also a plot twist I'm not entirely convinced came off flawlessly. This is one of those times I wish I could discuss spoilers. Let's just say it puts Eleanor Oliphant up there with the biggest unreliable narrators of all time, but that's enough. Overall, I'd give the book four or five stars for the theme and the ending, but just one or two for the tortoise pacing throughout the start. It's one of those cases where I have to take the averages for my final ranking.