'A Tree Grows in Brooklyn' by Betty Smith 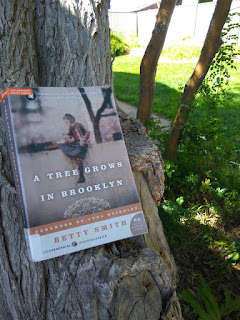 The beloved American classic about a young girl's coming-of-age at the turn of the century, Betty Smith's A Tree Grows in Brooklyn is a poignant and moving tale filled with compassion and cruelty, laughter and heartache, crowded with life and people and incident. The story of young, sensitive, and idealistic Francie Nolan and her bittersweet formative years in the slums of Williamsburg has enchanted and inspired millions of readers for more than sixty years. By turns overwhelming, sublime, heartbreaking, and uplifting, the daily experiences of the unforgettable Nolans are raw with honesty and tenderly threaded with family connectedness -- in a work of literary art that brilliantly captures a unique time and place as well as incredibly rich moments of universal experience.

MY THOUGHTS:
This book amazed me, at this stage of my life. There is so much to love and relate to, it's like 'me between pages', although set in a way different place and time. I kicked myself wondering how a lifelong bookworm like me could have overlooked this gem when I was the same age as the main character Francie. For all those years, when people have asked about my favourite books, I could've mentioned this one, but just didn't know! And now I want to make up for lost time.

Basically, it's all about the struggle young Francie Nolan and her family face to hold things together when times are really tough. But she eventually manages to enter college without High School, although everything seems stacked against her. Francie (or Frances) lives with her parents Katie and Johnny, and her brother Neeley (Cornelius), a year younger than she is. They are so vivid and vibrant, you can't help distributing a quarter of your heart to all four. The story starts when the kids are 11 and 10 years old, zooms back to the past when their parents first met, takes us through their birth and babyhood, then catches up again and brings them to the brink of adulthood at 17 and 16.

It's a coming of age story in the best sense of the phrase. Not a syrupy sweet kids' story but a life commentary full of cynical, sometimes seamy observations. Betty Smith directs well-aimed digs at bureaucratic people in high places, such as doctors and teachers, who live in a privileged world of their own with no empathy or compassion for the people they supposedly serve. And good for her! Revealing hidden attitudes that stink should be part of a novelist's job when necessary. (Although a certain English teacher of Francie's strongly disagreed.)

Now I'll try to describe how the family touched my heart. The best sorts of stories are those in which the parents take shape as unique individuals with their own depth, rather than just being disciplinary shades in the background. 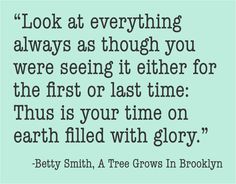 Oh, Johnny, Johnny, Johnny! The young dad of the family is charming and loving, with a smooth singing voice, natty dress style and knack of making everyone happy. He's their own 'sweet singer of sweet songs.' But we're told his hankering after immortality makes him a useless dreamer, and his freelance singing waiter job is a totally unreliable source of a steady income. His big enemy, alcohol, gets the better of him. Grab your box of tissues before you start.

When I think of Katie I want to push back my chair and give her a standing ovation. She's a hero-mother, with a fierce desire to do anything to not only preserve but prosper her family. She's never afraid to roll up her sleeves and work really hard, and for most the book, puts in long hours as a cleaning lady and janitor. Katie brings dignity and finesse to her job, proving that we're not defined by our occupation, but in fact define it. She has no time for self-pity, which distracts her from what needs to be done and doubles the misery. I love how she chooses to ignore naysayers and focuses on what she knows to be the truth in her heart. 'When she spoke, it was truly, with the right, plain words. And her thoughts walked in a clear, uncompromising line.'

Katie's mother, Grandma Mary Rommely, is deeply pious but un-judgmental of others. Her advice to her daughter about raising children is the best. A steady diet of legends and fairy tales is as vital to their health as physical food. Because a person living in the hard, cold world must have a robust imagination to retreat into, or the world will prove to be too much for them. 'Only by having these things in my mind can I live beyond what I have to live for.' It makes sense to Katie, who gets hold of a Bible and volume of Shakespeare, and starts reading a page of each to her daughter and son every night, while they're still babies in their cot.

Francie takes it all on board to carry her through life. She figures out early on that books will always be there for her, filling lonely moments, and becoming the perfect substitute for close friends. One of her first jobs is at a 'clipping bureau', which turns out to be a fascinating relic of bygone days. Basically, these girls were engaged as Google search engines by wealthy clients. They sat perusing newspapers all day to cut out articles for their customers' files, relating to whatever they were looking for. Hey, I can imagine myself doing that, but the downside seemed to be eye-strain and brain-strain, since they were unable to work on auto-pilot but had to concentrate intently around the clock. For Francie, it's one of many stepping stones to where she wants to go. 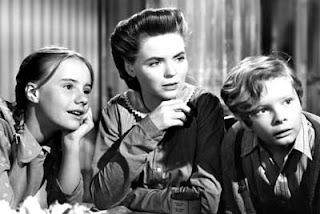 But family dynamics gets tense at times, as favouritism keeps rearing its head. Katie Nolan knows from the start that she'll prefer her cute and robust son over her more puny and dowdy daughter. She has dreams to make Neeley into a sort of new-and-improved Johnny (which amazingly seems to work). Rather than trying to change her own heart, Katie thinks, 'I'm going to love this boy more than the girl, but I  mustn't ever let her know. It is wrong to love one child more than the other, but this is something I can't help.' So with that attitude, how successful do you think she is at concealing it?

It got me hopping mad at first, but I came to see it's all part and parcel of the traits I admire about Katie. She's a lady in touch with her own emotions who can't be bothered trying to fool herself with denial. Plus she's an excellent mother to both. But Francie is sensitive enough to grasp the way things are, long before it bursts out into the open in a way that upsets both children. It's family tension at its best, but I'll say no more. Hats off to the children though, for not buying into competitiveness, jealousy and comparison.

The ending comes at an interesting point for Katie and her kids, and I keep wondering what would have happened next. Katie doesn't seem like the sort of person who could function as a lady of leisure. She'd surely crack at the seams. Francie has the romantic dilemma of not loving the guy who's interested in her as much as one who jilted her. Will the emotions gradually make her crack? And Neeley doesn't strike me as the academic type, so will he keep letting the ladies of the family decide his destiny? If he keeps going along with his mother's ambitions for him, will he crack too? Oh Betty Smith, you rounded it off at a nice place, but I still want more! But I guess that's what our imaginations are for.