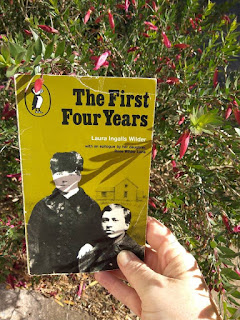 Laura Ingalls Wilder is beginning life with her new husband, Almanzo, in their own little house. Laura is a young pioneer wife now, and must work hard with Almanzo, farming the land around their home on the South Dakota prairie. Soon their baby daughter, Rose, is born, and the young family must face the hardships and triumphs encountered by so many American pioneers. And so Laura Ingalls Wilder's adventure as a little pioneer girl ends, and her new life as a pioneer wife and mother begins. The nine Little House books have been cherished by generations of readers as both a unique glimpse into America's frontier past and a heartwarming, unforgettable story.

MY THOUGHTS:
The manuscript of this story, more the size of a novella, was found in Laura's possessions after her death. It would have been a great discovery for readers who thought it all ended with These Happy Golden Years. 'But wait,' the publishers would say. 'There's more.' My little old Puffin has a terrible looking photoshop job on the cover, but I was still happy to pull it out and get stuck into it again.

The start takes us back to the end of the last novel, when Laura and Almanzo take a buggy ride to discuss their wedding. This time, there's an additional bit that didn't make it into that story. She's decided she doesn't want to marry a farmer after all. (Nice thing to tell a guy when you've been wearing his ring for weeks.) I can understand Laura's train of thought though. It's such a hard life for a woman, because she works so constantly, but is always broke. Meanwhile, the more chilled and relaxed people in town are happily earning money off her family. 'Can't you do something else?' she asks.

Almanzo's reply is along the same lines as his parents' reasoning in Farmer Boy. Farmers are independent, they answer to no man, and have the potential to earn far more than townies if they're willing to work hard. He suggests a three year probation period, and if she's still not happy at the end of it, he'll seek some other vocation. Later he convinces her to extend it to four years. So this little book is all about how it turns out for them.

I like the bold way they begin married life. Laura's courageous nature always impresses me. This five foot tall teenager is game for anything. She scolds a bunch of Indians for standing around in her barn, then hauls off and slaps one in the face. On another occasion she seizes a pitchfork with the intention to scare some howling wolves from their sheep. Luckily the pack has moved further on, but when Almanzo asks her what she would have done, she says, 'Driven them away, of course. That's what I took the pitchfork for.' I wouldn't ever mess with her.

Some more personal, potential personality clashes pop up occasionally, giving the impression that Laura was supporting her position through the pages. Like the time Pa called them crazy for taking newborn Rose out to visit in sub-zero temperature. Laura knows her baby was fine though, because she was well rugged up, and obviously made it unfrozen. She defends herself to generations of readers, whether or not she did to her father's face. At other times she thinks her husband's easy-going nature might be taken advantage of by such people as the neighbour who borrows and wrecks their tools, then fails to return them. More than once, she thinks, 'Oh well, that's Manly's business, and he's not worried.' I can imagine her saying it with an edge to her voice.

Most of all, so many of us relate to her love of books. A kind neighbour brings her a set of Sir Walter Scott's Waverley novels, which Laura credits with helping her through a hard pregnancy. 'She forgot to feel ill at the sight and smell of food, in her hurry to be done with the cooking and follow her thoughts back into the book. She brought some of their magic and music back into the little house with her.' Yes, don't all bookworms know that feeling.

But how about their deal? It seems the great blessing of their daughter Rose's birth is offset by several sudden disasters. A freak hailstorm can ruin a year's good growth of wheat in twenty minutes. When diptheria strikes the family, poor Almanzo exerts himself too soon during convalescence and suffers a stroke that paralyses his legs, so it takes months to regain sufficient flexibility for work. There's the tragic death of their infant son, and a house fire that burns everything to the ground. (Why did that boy die, when he started with such a healthy ten pound birth weight? It was so sad.) Then speeding winds flatten more crops. They've obviously had to fight tooth and claw for every inch they've gained, so how does it all stack up when they reassess at the end of the four year time period?

Somehow, he convinces her to keep going! You might ask how on earth did he do it? Reading between the lines, I think Laura might have caught some of Almanzo's gambling spirit, since their lifestyle is always a bit of a wager. They probably shared an unshakable feeling that giving up might be too soon, since one good year could turn everything right around. Since you never know when that good year might come, you might as well give it a little bit longer. I can see how that sort of gamble could become an addiction. And some people might say that describes all of life.

One thing would've been clear to them, it was nothing personal. Several bad strokes happened to neighbours and complete strangers too, from death to total financial loss, which we hear about in small anecdotes. Although Uncle Sam gave settlers the incentive to go out and tame the rocky, barren country, it was an impossible expectation in many ways. I'm glad I wasn't around to make the attempt in their time and place, but glad they did it, for the sake of reading these books and what we can take on board from them.

And this one sentence is enough to prove that many of the tough times were all worthwhile. 'It was a carefree, happy time, for two people in sympathy can do pretty much as they like.'

Next up will be On the Way Home.