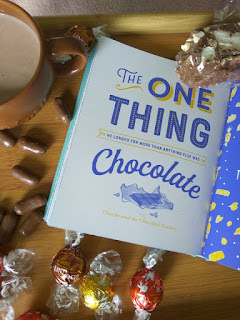 Books and chocolate are one of those matches made in heaven, but not all the time. I couldn't eat chocolate whenever I read without busting both my budget and waistline. Every so often it's great for your soul to sample both together though, and here is a list of recommendations for those occasions, because many authors and storytellers seem to understand the tantalising pull of delicious chocolate. When I started trying to brainstorm, it occurred to me that stories with chocolate seem to fall into three categories.

Chocolate as Control. In this type of plot, we see the dark side of chocolate, and I'm not talking about dark chocolate! Something so delicious has the potential to be a real bone of contention. It's been used to twist people's arms, bribe them, and even cause occasional violence.

There was almost too much chocolate for some of the characters to handle. A young gypsy woman named Vianne sets up a decadent chocolate shop opposite the church in a small French village. Since it's the beginning of Lent, Father Reynaud is trying to keep his flock practicing self-denial. Her arrival is a disaster, and it's clear all through the story that an eventual show-down is inevitable. It's a classic, 'This town ain't big enough for both of us,' scenario, and he was there first. Of course we're drawn to ponder the nature of institutional authority, and question the point behind certain restrictions. The irony is evident, seeing chocolate is now synonymous with Easter, which Lent is leading up to.

The Chocolate War by Robert Cormier
This young adult novel draws us right into conflict with a capital C. An annual school chocolate fundraising sale becomes the scene of a power battle, and eventually outright war. A young student named Jerry Renault dares to stand up to the Vigils, a gang of thugs who try to dictate how many boxes he should sell, for their own agenda. When he refuses to be pushed around, they know their own credibility will be undermined unless they do something drastic and nasty. School politics becomes a mirror for life at large, and chocolate is just the trigger to set it all off.

My Fair Lady
One of the feel-good musicals of all time. When Professor Henry Higgins first accepts his friend's challenge to make a common flower-seller into a genteel lady, Eliza Doolittle refuses to go along with the plan. She's no fool, and realises that almost all of the hard work and frustration will be required from her. But Higgins uses some ingenious, foolproof coercion to make her re-consider. He simply offers her a chocolate. Eliza has tasted enough to have a weakness for this sweet treat, and decides if it's his normal bribe, it might just be worth the hassle of changing her whole persona. 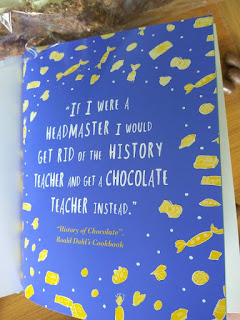 Chocolate as Misunderstanding. I guess it stand to reason that mix-ups can occur in plots about chocolate, since chocolate boxes come mixed themselves.

The Chocolate Tin by Fiona McIntosh

The story is set during World War One, and the Rowntree family have organised a shipment of their famous chocolate tins as morale boosters for the soldiers in the trenches. One day a volunteer packer named Alexandra makes an impulsive, random addition to one of the tins, which comes back to bite her a few years later. I loved the tasty premise, but this wasn't my favourite book. Review is here.

Harry Potter
Poor Ron Weasley has a really terrible 17th birthday. Never one to resist a treat, he gets stuck into a box of chocolates in the boys' dorm, but they've been laced with love potion for Harry by one Romilda Vane. And then the antidote itself turns out to have been poisoned, which sends him to the hospital wing lucky to have escaped with his life.

Hazel Green by Odo Hirsch
It's the start of one of my favourite ever kids' series. Hazel's good friend Mr Volio the baker has a top secret recipe he'd like her help to name. It has a shortbread base with toffee, strawberries and custard, all in a delicious layer of chocolate. But when the Chocolate Dipper is christened, he accuses Hazel of leaking his secret to a rival baker, Mr Murray. The evidence against her looks bad, and she must work hard to fix the misunderstanding. Here is my review. 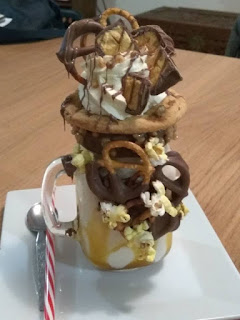 Chocolate as Cure and Treat. This might be the best way to enjoy chocolate in both stories and real life.

Harry Potter
After the chilly, soul-sucking dementors have swept aboard the Hogwarts Express at the start of Harry's third year, the new teacher Professor Lupin has the antidote to drive their awful influence away. Chewing a square of two of chocolate is an instant mood booster. Even muggles understand how dark chocolate contains good endorphins to help fight depression, which has a similar effect to dementors. Wizards and muggles alike are warned to make sure it's used just as a short-term pick-me-up though.

A Tree Grows in Brooklyn
I call this the most touching of all. The night after her beloved husband Johnny dies, Katie Nolan sends their two kids out in the winter night for some fresh air. They return to find she's improvised a hot chocolate treat for them out of practically nothing. It's cocoa and condensed milk made into a paste with boiling water added to it. The loving gesture does make Francie and Neeley feel better, especially when she adds a marshmallow to float in each one. (Review coming soon.)

Charlie and the Chocolate Factory
This story must surely be the ultimate celebration of chocolate. The enigmatic Willy Wonka has decided to show five lucky golden ticket winners through his incredible chocolate factory. The tickets are floating around the country in random chocolate wrappers. After the first four are confirmed, Charlie Bucket gets lucky for once in his destitute little life. Later as his four bratty companions are picked off one by one, he and his Grandpa Joe are in for the ultimate chocolaty surprise.

Can you think of any more stories that feature chocolate? That loaded milkshake photo was a creation my daughter made one evening. She offered her brothers a homemade treat, and their eyes popped out of their heads when they saw what it was. Working on this list makes me want to drive to the shop for some right now, but I guess one more incident some of us may choose to forget is that Monty Python scene with the big guy at the restaurant, when they offer him one last after-dinner-mint. If you've seen it, you'll know just what I'm talking about.

Maybe I'll finish with just one more, which was one of my own pet projects. I clearly remember planning this section because I was thinking about chocolate scorched almonds in my car at the time I was working on it, and couldn't get them out of my mind. I decided to write a little bowl of scorched almonds into the plot, as one thing my hero with amnesia tried to jog his memory with. There was something crucial about an incident in which he was eating scorched almonds in the past. But it was too much for him, as he decides everyone loves scorched almonds, so it's not much of a clue as to his identity. As soon as I finished writing the rough draft of this bit, I went to Coles to buy some scorched almonds. (See here for more.)