'On the Way Home' by Laura Ingalls Wilder 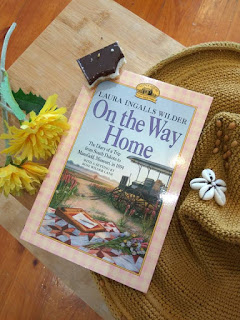 In 1894, Laura Ingalls Wilder, her husband, Almanzo, and their daughter, Rose, packed their belongings into their covered wagon and set out on a journey from De Smet, South Dakota, to Mansfield, Missouri. They heard that the soil there was rich and the crops were bountiful -- it was even called "the Land of the Big Red Apple." With hopes of beginning a new life, the Wilders made their way to the Ozarks of Missouri.

During their journey, Laura kept a detailed diary of events: the cities they passed through, the travelers they encountered on the way, the changing countryside and the trials of an often difficult voyage. Laura's words, preserved in this book, reveal her inner thoughts as she traveled with her family in search of a new home in Mansfield, where Rose would spend her childhood, where Laura would write her Little House books, and where she and Almanzo would remain all the rest of their happy days together.

MY THOUGHTS:
Here's another book you could comfortably read in one sitting. I guess we could consider it the first Laura ever wrote, although it was back when she had no idea she'd ever be an author or become famous. It's a diary she kept on the road as they travelled between De Smet, South Dakota, and Mansfield, Missouri, where they hoped to thrive instead of suffer. I like the line from the song about South Dakota. 'We don't live here, we only stay, 'cause we're too poor to get away.' Well, the Wilder family saved enough to make an escape, along with their friends, the Cooley family.

It's sandwiched between an intro and conclusion by Laura's daughter Rose, who got it all together presumably to satisfy public demand for more Little House stories. She slots explanatory footnotes throughout the text too. When Laura mentions, 'luscious looking fruit I don't know,' Rose tells us they were persimmon and pawpaw.

It's an interesting read, but more of a factual document than Laura's usual lovely storytelling prose. This time she wasn't 'seeing' for her sister Mary or thousands of readers, but just keeping notes for her own records. For anyone who expects another novel, there are lots of gaps and unanswered questions. For example, did the Wilders even like the Cooleys? Rose liked the two boys, but Laura never wrote anything about their parents, such as, 'Frank and Emma are great.' We'll never know what things were really like on the road.

She describes the landscape in terms of crops, water quality, soil consistency and size of farms. There's not much of the usual description of setting Laura became known for. The beauty is summed up in passing remarks, such as their first impressive sight of the Ozarks. 'Manly says we could almost live on the looks of them.' But most likely she didn't have her full heart in the trip. Rose reveals how she mentioned it to her mother years later, and Laura snapped, 'I don't even want to think about it.' Probably the upbeat terseness covered lots of grief at all they were leaving behind.

I'll mention just a few points of interest I noticed.

There's the hundred dollar bill that went missing just when they intended to purchase their dream block of land. Oh whoa, can't you just imagine Laura and Almanzo searching frantically through all the nooks and crannies of the little lap desk? It appears Rose never really forgave her mother for asking whether or not she took it out to look at or play with. She felt angry and insulted because they should've known she wasn't such a baby. Well maybe she wasn't, but I can't help thinking she made no allowances for desperation, which shows her youth anyway. What a relief when they found it.

Some more of Rose's black-and-white memories make me smile, such as the indignation she felt on her friend Paul Cooley's behalf. Whenever they passed through big cities, his mother grabbed the lines of the team he'd been driving. The kids all resent this, since he'd proven himself such a good driver on country stretches.

We see Laura's strong notion of independence which comes through in later books. A friendly family offers to host them for dinner, but it's out of the question. Laura writes, 'Of course we could not stay. We could not be neighbourly to them in return.' It sounds like the mindset she'd acquired from her mother, Caroline Ingalls, but sort of limits people who want to make gracious, random acts of kindness.

She can spot people who aren't hard workers. 'Judging from the weeds in the gardens and fields, the people are shiftless.' Her description of Kansas perfectly matches my concept from The Wonderful Wizard of Oz, although I'll surely never visit. There were three to five inches of dust on the road, which they stirred up and had to breathe all day. And when they got to rocky Missouri, Rose and the Cooley boys always had bandaged toes, since they were stubbing them against half concealed stones underfoot.

Finally, there's the new gimmick Almanzo sells here and there along the road, to help with expenses. To them it was a labour saving wonder tool, but to us it sounds extremely unhealthy. He was peddling asbestos fire mats, which you could heat up knowing they'd turn bright red without burning, so then you could keep your pots and pans hot on them. He says, 'Every woman should have one.' No thanks, Almanzo, I think I'll pass.

This is a great supplement to the series, but I wouldn't recommend that anyone read it first, before the main canon.

Next up will be West From Home.