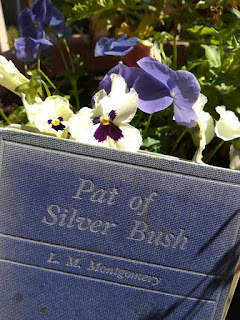 Patricia Gardiner loved Silver Bush more than anything else in the world. She was born and raised in the beautiful old-fashioned house on Prince Edward Island, "where things always seemed the same" and good things never changed. But things do change at Silver Bush--from her first day at school to the arrival of her new own first romance. Through it all, Pat shares her experiences with her beloved friends and discovers the one thing that truly never changes: the beauty and peace she will always find at Silver Bush--the house that remembers her whole life.

MY THOUGHTS:
I've chosen this as my Children's Classic in the 2018 Back to the Classics Challenge, and I'm lucky enough to own a very old edition, although I've no idea where it originally came from. But the publication date is 1934, and since the story was first published in 1933, it must be one of the earliest versions possible. Maybe my mum had it when she was a girl. It's a delight to read something so old.

If you're a fan of Lucy Maud Montgomery, you'd have to be living under a rock not to know that several readers throughout the decades have called Pat Gardiner her worst heroine, but to me she's the best! While favourites like Anne and Emily are easy to admire but pretty unreachable, Pat is the sort of girl anyone can aspire to be. She doesn't have their same drive to excel, but her special talent is simply the ability to love things and people extra hard, including her family home Silver Bush. Other than that she's quite content to be ordinary, with just a few close friends, average intelligence and no burning ambition. To me, that makes her a breath of fresh air in a world of self-promotion.

No Montgomery heroine can escape their own brand of intensity though, and it's the nature of Pat's that make detractors call her silly. She loves things so hard that she can't bear change of any sort, from the chopping down of trees, to people leaving the family nest, to her dad shaving off his moustache. We can guess from the start that she'll be in for one letdown after another, since change is inevitable. The episodes are structured in such a way that one looming change after another threatens Pat's security, until they're either diverted or prove to be not so bad. Except for the few that are heartbreaking. In our era of mental health awareness, it strikes me that this is Pat's form of anxiety, which can manifest in many shapes. So twenty-first century readers who call her nasty names may be missing the point, or lacking in sympathy. 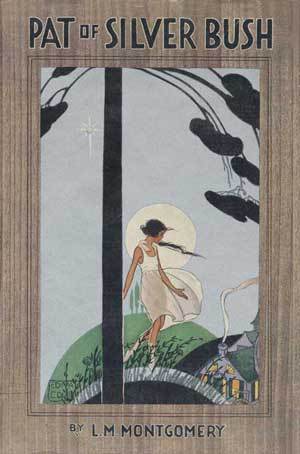 Pat is also the only LMM heroine to live in a reasonably stable traditional family, with both parents and several brothers and sisters. Some family members come across a bit shadowy at times, but that's fine. I'm not concerned with Winnie and Joe, the eldest sister and brother, not having a bigger presence on the pages. My older sister and brother floated around the periphery of my life too, which didn't mean I loved them any the less. I listened to their doings, but they never impacted my personal story, which is where Pat is at with Joe and Winnie. Montgomery has made it clear that the two eldest siblings are living eventful lives of their own, but this is Pat's story. Sid, the brother next in age to her, gets more of a look-in, and the father, Long Alec seems like a decent chap.

A story like this needs strong support characters though, and this one has two. First is Judy Plum, the loving old Irish housekeeper who's been with the family since Dad was a small boy. She's a master storyteller who seems to know something juicy about everyone within a hundred mile radius. Her method of childcare would never be endorsed in any modern text books, as it includes stories of ghosts, murders and wicked fairy folk. The kids all 'get' her though, and enjoy the thrills of her tales. Judy says, 'If ye can't be believing anything, what fun are ye going to get out of life?' I love her.

There's always someone with a sad or dysfunctional family background in LMM stories, and this one belongs to Pat's friend Jingle, aka Hilary Gordon, my favourite character. This boy is an absolute legend. In terms of supportive family members and opportunities for fun, he has nothing going for him. His father is dead and his neglectful mother has dumped him with her brother-in-law, who's equally indifferent. But in terms of appreciation, beautiful heart and sheer good nature, he has everything going for him. He's one of literature's best geeks, who proves that a boy can be gentle and dreamy without sacrificing manliness and strength of character. And if somebody asks which Montgomery episode first springs to spring to mind from any series, I might even choose the occasion when his mother pays a flying visit to sort out his future, and he's thoroughly disillusioned. It wouldn't be the same story at all without Hilary.

The person who falls short for me is 'Mother.' Montgomery never knew her own birth mother, which makes me wonder if that's partly why Mrs Gardiner doesn't spring to life on the pages. She's like a mousy person who creeps around the house without a strong identity. Even Judy calls her 'Mrs Long Alec' rather than 'Mary'. But I didn't like Mother after an episode where Pat was caught dancing around outside in the nude (yeah, truly). The family devises a punishment which a loving mother should never have gone along with. You'll see if you read it. From then on I saw her as not just a wimp but a cruel wimp, the worst sort.  Even though we're supposed to think she was a wonderful mother, we are told told and not shown. I'm sorry, Lucy Maud Montgomery, but I hardly liked her any better than I liked Jingle's mother, who was a callous cow, but at least she was a cow with colour.

On the whole, it's great to read a family story full of such magic. It's not the obvious magic of Harry Potter stories, but the sort of hidden, subtle, everyday magic that could fill any of our lives, such as psychic cats, subtle atmosphere changes, and the effect of ravishing beauty and great emotion, not to mention legends of kelpies, leprechauns and other fairy folk.

But most of all, how liberating to come across a heroine full of such enthusiasm for what others consider mundane work, who proves that running a household isn't demeaning but just another valid life option for people who genuinely appreciate the lifestyle. I loved seeing the usual ending scenario turned on its head. In many stories, a girl gets an opportunity to spread her wings, leave the family nest and meet the wide world head-on. But it doesn't have to be that way if there's a better, humbler fit. Pat was nudged out of the nest to spread her wings grudgingly, but expands with joy when circumstances enable her to return home. And that makes me happy enough to give the story full marks.