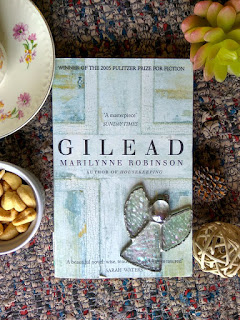 Twenty-four years after her first novel, Housekeeping, Marilynne Robinson returns with an intimate tale of three generations from the Civil War to the twentieth century: a story about fathers and sons and the spiritual battles that still rage at America's heart. Writing in the tradition of Emily Dickinson and Walt Whitman, Marilynne Robinson's beautiful, spare, and spiritual prose allows "even the faithless reader to feel the possibility of transcendent order" (Slate). In the luminous and unforgettable voice of Congregationalist minister John Ames, Gilead reveals the human condition and the often unbearable beauty of an ordinary life.

MY THOUGHTS:
This 2005 Pulitzer Prize winner was one of the books I picked up during a recent second hand shop trip. Probably one of the prizes of the haul.

77-year-old Reverend John Ames has been told by his doctor that his days are surely numbered due to a congenital heart defect. The old minister had married late in life, and has a much younger wife and 7-year-old boy. He decides to spend part of his remaining days writing down all the important things he believes he won't be around to tell his son as he grows up. So this book is like a stream of consciousness, or long letter written to the future young man. At least this way the boy will inherit something of his father's heart. And needless to say, a book with this intention is bound to be honest and selective about what the author chooses to share.

John's mind frequently wanders to the men of his own family, who were also pastors. He grandfather was a supposed visionary with a stern, Old Testament outlook and passion for the notion of purging war. Yet his son (John's father) was a pacifist whose ideas about grace were quite different. And then there was John's smart older brother Edward, who received a collection from the congregation to send him to a seminary in Germany. Yet he returned home an atheist. And interestingly, their collective generational experiences crossed three wars, starting with the Civil War and ending with World War Two.

John's childhood stories may appear a bit meandering and random on the surface, but there's always a sense that if they've stuck in his memory all those years, there's no doubt some significance for us too. It's a bit like listening to your own grandfather reminisce, and hopefully inspires readers who still have the opportunity to do so in reality. Hey, anyone who still has a grandfather or elderly father, go and visit him!

It's not all a hodge-podge of memories. There's a gentle plot brewing as well, especially when John reflects on current town events. His godson and namesake, Jack Boughton, is back after years of making mischief and breaking hearts. Why does old John Ames, who has shown himself to be broad-minded, kind and tolerant, have trouble forgiving Jack for something from the past which we don't know? It seems to verge on personal, and he admits he has trouble thinking charitable thoughts about him. We want to know why. It's the sort of book that can stir our nosy human nature for a bit of juicy gossip.

Jack is one of my favourite characters. The story makes us feel empathy for him, all the while we're reading disapproving words. I think it's partly because deep down, we get the feeling John cares deeply for him too. And reformed bad boys with mysterious secrets make intriguing characters. Jack's behaviour is often too quiet and dignified, and sort of weary and sad for a person who is presented as mean all through from his childhood. And he drops lines like, 'I always seem to give offence. I don't always intend to.' And we do eventually discover those bits of his background.

The way matters of faith come across in this novel really impressed me. It's not technically a Christian novel, yet John's words about his personal faith make it more convicting to me than many I've come across that are. He never writes or speaks as if he has an agenda to preach or proselytise. It's simply the justification of his life's work in his own mind, at a crucial time of his life. There are several quote-worthy lines, so I'll finish off with some of the ones which stuck out to me.

His reasons for writing. By the time you read this, I'll know most of what there is to know about being dead, but I'll probably keep it to myself. That seems to be the way of things.

Further thoughts about what heaven will be like. I think Calvin is right to discourage curious speculation on things the Lord has not seen fit to reveal to us.

On being awakened accidentally from a sound sleep (by poor Jack, of course). I felt just as I imagine the shade of poor old Samuel must have felt when the witch dragged him up from Sheol.

On seeking proof. My advice is this. Don't look for proofs. They are never sufficient to the question, and they're always a little impertinent, because they claim for God a place within our conceptual grasp. (Wow, if only we remembered that one more often.)

On being unable to find the right words. My failing the truth could have no bearing at all on the Truth itself, which could never conceivably be in any sense dependent on me or on anyone.

On changing times. The same words that carry a good many people into the howling wilderness in one generation are irksome and meaningless in the next.

On keeping resentments and grudges. It is worth living long enough to outlast whatever sense of grievance you may acquire.

And my favourite quote of all. The Lord is more constant and far more extravagant than I seem to imply. Wherever you turn your eyes, the world can shine like transfiguration. You don't have to bring a thing to it except a little willingness to see.