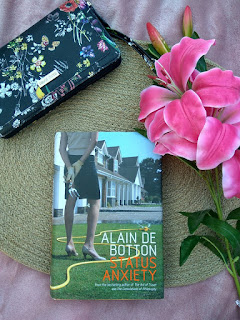 Anyone who’s ever lost sleep over an unreturned phone call or the neighbor’s Lexus had better read Alain de Botton’s irresistibly clear-headed new book, immediately. For in its pages, a master explicator of our civilization and its discontents turns his attention to the insatiable quest for status, a quest that has less to do with material comfort than with love. To demonstrate his thesis, de Botton ranges through Western history and thought from St. Augustine to Andrew Carnegie and Machiavelli to Anthony Robbins.Whether it’s assessing the class-consciousness of Christianity or the convulsions of consumer capitalism, dueling or home-furnishing, Status Anxiety is infallibly entertaining. And when it examines the virtues of informed misanthropy, art appreciation, or walking a lobster on a leash, it is not only wise but helpful.

MY THOUGHTS:
This book takes a really interesting look at a common phenomenon which was never much of an issue until the early nineteenth century (although we do see examples as far back as the New Testament). You'd think that ushering in an era of equal opportunity for all, regardless of race, gender or background, would have to be a good thing, right? Well, it would seem every sparkling rainbow might have a cloudy lining, to twist a popular proverb around a bit. In this case, the beast that raised its ugly head is called meritocracy.

In a nutshell, when people used to be born into fixed social positions, their destinies were out of their control, so they just made the best of the hands fate dealt them. But now, most western individuals are born into a society in which there are far more life options than ever before, and theoretically, somebody born in a ghetto or slum has the potential to become rich and famous. Now that we are all held responsible for shaping our own individual stories, the silent implication is that if we fall short of our goals, or miss some social measuring stick, then we're losers and flops.

In the first half of this book, Alain de Botton takes a closer look at meritocracy and some of its nasty relatives, including snobbery and expectations. The second half studies ways in which people have tried to neutralise these over the years, so that status anxiety is no longer an issue. These include philosophy, art, politics, Christian tenets and Bohemian theories. I really like de Botton's eloquent way of writing, and the photos he's including to push home the points he makes.

His section on the arts includes the writing of great novels. So often, these aim to turn narrow social assumptions upside down and provide voices for marginalised people. They do it in a very persuasive, descriptive and fascinating way, which is partly why I've always loved reading them. Visual artists do similar things when they present humble scenes or modest people as some of the loveliest we can lay our eyes on. 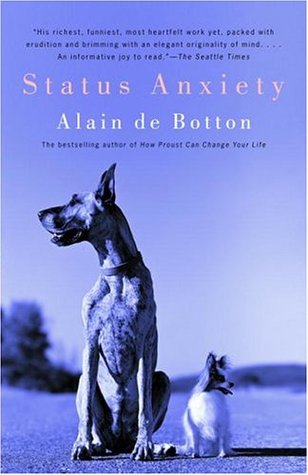 There's a really thought-provoking thread in the Christianity section about how quickly all things pass away, putting all the energy we may expend to look good and impress the right people in a sort of perspective. It gets us wondering whether we should redefine what we consider a worthwhile pursuit or a waste of time. The photos of nature, ruins and antiquities just pushes home the point. This book is a keeper, which I'll put on my shelf to dip into at other times.

Some great quotes that stand out.

'We may be happy with little when we've come to expect little. And we may be miserable with much when we've been taught to expect everything.' William James

'The price we have paid for expecting to be so much more than our ancestors is a perpetual anxiety that we are far from being all we ought to be.' Alain de Botton

'Other people's heads are a wretched place for true happiness to have its seat.' Arthur Schopenhauer

And finally there's this sentence, which might be worth a ponder. 'Cynics are only idealists with awkwardly high standards.'