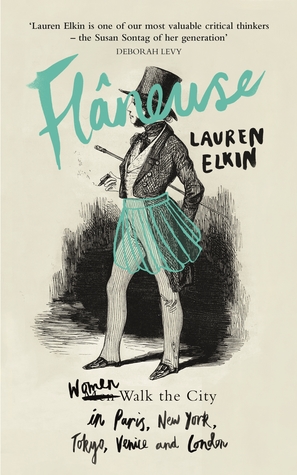 'Flâneuse [flanne-euhze], noun, from the French. Feminine form of flâneur [flanne-euhr], an idler, a dawdling observer, usually found in cities.

That is an imaginary definition.'If the word flâneur conjures up visions of Baudelaire, boulevards and bohemia – then what exactly is a flâneuse?In this gloriously provocative and celebratory book, Lauren Elkin defines her as ‘a determined resourceful woman keenly attuned to the creative potential of the city, and the liberating possibilities of a good walk’. Part cultural meander, part memoir, Flâneuse traces the relationship between the city and creativity through a journey that begins in New York and moves us to Paris, via Venice, Tokyo and London, exploring along the way the paths taken by the flâneuses who have lived and walked in those cities.From nineteenth-century novelist George Sand to artist Sophie Calle, from war correspondent Martha Gellhorn to film-maker Agnes Varda, Flâneuse considers what is at stake when a certain kind of light-footed woman encounters the city and changes her life, one step at a time.

MY THOUGHTS:
First off, I found the title and cover very misleading. I'd expected this book to help get us in the frame of mind for walking and exploring, and give us tips for noticing things along the way and maximising our experiences. I guess I thought it would be more of a hobby guide, so to speak. Instead, it turns out to be a re-telling of the lives of different academic women throughout history, majoring on their social and feminist agendas. One thing they had in common is that they liked to walk the streets of their big cities, yet the book doesn't say all that much about their walking at all, considering the title.

I think the author meant to tie it all together. At the start she mentions how the flaneur (or male aimless pleasure walker) got a bit of attention and recognition in the nineteenth century, but not his female counterpart, because many people denied the existence of such a thing as a flaneuse. Lauren Elkin set out to show that although they were hidden, they really were there. At this stage it seemed the book would turn out to be a bit like a thesis or doctorate; an intellectual social commentary about walking, rather than a book encouraging us all to get out and walk more. I was still OK with that. But then as I said, it diverged in all sorts of different directions unrelated to walking at all.

The small snippets Elkin did say about the subject were great. It can be considered mapping an area with our feet, and we notice that the names a city bestows on its streets and landmarks reflects the values it holds. She also says that walking reminds her of reading, because we feel as if we're temporarily a part of lives and conversations that are unrelated to us, and form a sort of unspoken comradeship with a wider whole. I like that sort of reflection, but there weren't enough of them.

If you're looking for a text book on the lives of Jean Rhys, George Sands, Virginia Woolf, Martha Gelhorn and Agnes Varda, this might fit the bill. Yet if you want a book focused of walking, well, this is not so much. I found it hard to hold my attention several times.

Overall, it's a dense book with hours of hard work crammed into it, and plenty to reflect on, but it wasn't what I thought I was ordering. In this case, I didn't want heavy and rich, but light and easy to digest. It was like having the wrong dish from the kitchen placed in front of me, and I'm going to rank it as such :(

Thanks to Net Galley and Farrar, Straus and Giroux for my review copy