Why Fantasy Novels remind me of Social Media 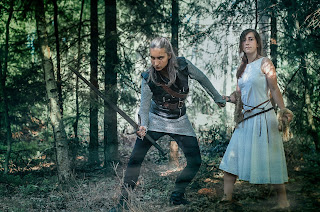 I've been totally confused by my own feelings about fantasy novels. I want to figure out why they waver all over the place, because other people seem far more clear cut in their opinions. I've met several readers who claim, 'I never read fantasy.' Yet I've come across just as many who turn up their noses at any other genre, because fantasy realms are their own special sweet spot. I can't even claim to fall in the middle. I'm definitely not halfhearted about them. If I was asked to list my favourite books and stories, they would surely be fantasies. But some of the most boring, torturous things I've ever gritted my teeth and attempted to plow through have been fantasies too.

That's why I hesitate to accept requests to review them on this blog. If they fall into the latter category, I know I might be brought to the point of tears, but there's simply no way of telling until I begin reading. (One thing that seems to hold true for many fantasy authors, both good and bad, is that they like writing super long stories) I've thought of the element that might make the difference between the best and worst. This might come across as a sweeping generalisation, because there are several sub-genres in the all-encompassing term 'fantasy', but it tends to be a general rule of thumb for me.

The type I love.
Some fantasies begin in the real world and draw the hero into the alternate reality, plunging him into a staggering realm he'd never expected. Those tend to be my favourites, because we readers are taking all the brand new experiences on board at the same time as the main characters. We're living through their eyes. We remain on top of the plot to the extent that they do. And often the fantasy world is just another intriguing side to earth of which most people are unaware. This makes it that bit more magical and fun.

Think of Harry Potter, living in the poky closet beneath the stairs, when magical invitations to Hogwarts start arriving.
Or the Pevensie children, trying to come to terms with their new abode when Lucy finds her way to a strange place through the back of a wardrobe.
Or Jacob Portman, interrupted from his boring existence by the death and cryptic message from his grandfather.

The type I don't love so much.
Without denouncing every single one of these, I've found they often tend to begin and remain in their own parallel universe. This alternate reality may have nothing in common with ours, so earth may as well not exist. Think of the hobbits in Lord of the Rings, or the characters in the galaxy far, far away of Star Wars, to name a few popular ones (not that I hate these in particular). There are many, many, many examples. I find it harder to immerse myself in these, especially at the start, because I simply don't have a clue what's going on.

For prime examples of what I'm talking about, there's this one, and this one. The girl in the picture at the top of the page seems to be wondering, 'Where are you taking me?' That's the same question I've asked many fantasy authors.

It's as if we readers have been snatched from our own normal, daily lives and thrust into some strange realm where we are absolute novices. The characters who live there are simply going about their business, and the first five chapters or so might as well be written in Gobbledygook. They're using 'in-house' type of lingo from their own realms. They refer to bitter enemies which are simply weird names to us, and they're using technology or skills which we don't understand. As I said in one of the reviews, it's jolly frustrating when we have no idea what's happening, yet find ourselves forced into the head spaces of characters who do.

I'm the type of person who doesn't like the feeling of floundering, and I also like my reading times to be fun and relaxing. Being out of my depth for an extended length of time leaves me cold, so reading twenty of thirty pages of a novel and deciding, 'Well, that was as clear as mud,' isn't my favourite way to spend half an hour. I'm sure other readers must approach them more as quests to master or mysteries to fathom, because this type of fantasy has lots of fans. It's just not the way my cogs spin.

Here's the honest truth about my brain.
Normal, daily life plunges me out of my depth often enough, without willingly going through the same confusion in my reading times. My brain sometimes seems to need a bit more chugging time than those of others before I grasp things. I've read that this is one sign of an introvert's brain. Our pathways to understanding are loopier, so information has a longer and more complicated transit time. They also say that once we do grasp it, the introvert's insights may become even greater than those of the extrovert over time. It's just the processing that becomes a hassle.

So here's why fantasy novels are like social media.
It's the closest match I can think of, for the sort of love hate relationship I have with fantasies. Sometimes I adore using social media, and other times it has frustrated me no end. I'm pretty sure it comes back to the same thing, challenging my overtaxed brain to grasp it all.

New platforms tend to take me longer than others seem to spend. Friends and family flash around their hash tags, discuss programming details as if they're a cinch, and seem to intuitively understand all the etiquette and behaviour I'm always nervous about violating. They latch onto several forms of social media at once, linking them together and using them like pros. I'm not designed this way. Mastering the basic features of platforms such as Blogger, Facebook, Goodreads and Twitter, takes a lot of deliberate concentration and is still an ongoing journey. I'm sure it's put me at a disadvantage many times.

Such experiences rush my memory straight back to my past, when I was the youngest in my family. I used to listen to my family's conversations, not liking to admit that they were over my head, because it had only earned me laughs in the past. I'd try to grasp all the unfamiliar words and tricky concepts, promising myself, I'll get them eventually. But now I seem to find myself often in a middle-aged version of the same thing. I've come to recognise a certain expression of amused disbelief on my kids' faces, before they rush off to tell the others, 'Guess what Mum said?'

I think all this is my main reason for eschewing puzzling fantasies and choosing books I can grasp from the start, Since cluelessness has long been a theme of my life, I prefer to keep it out of my favourite hobby, reading. Sometimes I've persevered until I've broken through, and found other-world fantasies great. (Some recent ones I've rated high on this blog include A Cast of Stones by Patrick W Carr, even though it did begin confusingly, and Heart of the Mountain, by my friend Jeanette O'Hagan, which shows how simple and succinct world building can be.) But on the whole, it's often all I can manage to keep abreast of the world I'm already in. In fact, my children would probably tell you that frequently, I don't even manage that :)

So here's my message for fantasy authors. If you want to begin in the real world or some semblance of it and woo me in with a carrot, I'm willing to be that donkey.
BUT if you want to rudely drop me in like a foreign spy with a parachute (and I assume foreign spies actually have more low-down about the world they're entering than I do about these fantasies), then sometimes I might prefer to pass. 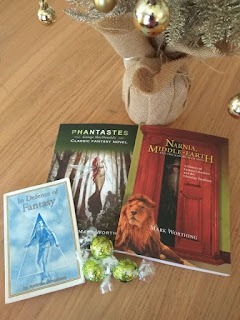 I'll be musing plenty more about fantasies over the weeks ahead. A few nights ago I attended the launch of Stone Table Books, a new publishing house based in Adelaide, which sounds very exciting. The first two titles on their list are now on my reading pile. The Narnia Middle Earth one is an overview of fantasies in the Christian tradition, and Phantastes is a re-telling of George MacDonald's earliest example by Dr Mark Worthing. They say the original is too obscure and difficult for most modern readers to wrap their heads around. If they say that, I'm the last person who'd choose to put it to the test :)
To this I've added a re-reading of one of my favourite little booklets, In Defence of Fantasy, by Andrew Lansdown.
Looks like a nice little pile to help see me over the summer, end of year break into the new year.